The Knoxville Journal, April 2, 1944
Pvt. James Henry Presnell Jr., 20, son of Dr. And Mrs. J.H. Presnell,, 609 Butler Street, died in Denver, Colo., Wednesday, March 29, 1944. Pvt. Presnell had been in service nine months, and had been recently transferred to the Medical Department of the Army Air Force. He was a member of Shiloh Presbyterian Church. Pvt. Presnell was a graduate of Austin High School, and was a sophomore at Knoxville College at the time he entered service. He is survived by his parents, Dr. And Mrs. J.H. Presnelll; brother, Pvt. Madison Presnell; sister, Miss Margaret Presnell, his grandparents, aunts and uncles.

Biography of James H. Presnell Jr.’s Father:
James Henry Presnell Sr. (1885-1950)
Knoxville’s “Bronze Mayor” was widely known throughout the city and was undoubtedly the most popular person in the black community during the 1930s and 1940s. Noted for his ever-present cigar and friendly manner, he was very involved in civic, church, and social activities.
James H. Presnell was born in Knoxville, Tennessee, on November 13, 1885. He was graduated from the Normal Department of Knoxville College in 1908 and from the College in 1910. After being graduated from Meharry Medical College in 1913, he set up his medical practice in Knoxville. In 1923, he married Cloteal Hardy, a popular teacher at Knoxville Colored High School. They had three children: James, Jr., Madison, and Margaret Louise.
Through the years, Presnell’s lucrative practice allowed him to accumulate a considerable amount of property. He continued his studies at Northwestern University and engaged in post-graduate work in some of the leading hospitals in the country. His patients ranked him high in his knowledge and practice of medicine.
In 1937, the Flashlight Herald, a weekly newspaper for the black community, sponsored the Bronze Mayor Contest, in an effort to give black citizens an “official” voice. Four of the city’s most prominent black men were in the contest. Presnell won by more than 2,800 votes over his nearest rival. One of the daily newspapers described the event as “just like Harlem.” When the results were announced, the newspaper reported that “the city stood abreast Harlem and Beale Street and other Negro sections which already had ‘mayors.'”
Presnell, in his usual genial manner, was quoted as saying, “I feel greatly honored. I went over and bought the boys of the Flashlight Herald cigars after they notified me of nay election.”
But that election was no lighthearted or trivial matter. He had been “elected” spokesman for the black community. His job, as he explained it, was to head committees of Negro citizens in conferring with city officials and others. One of his chief concerns was to prevent the Knoxville Housing Authority from destroying beautiful homes and prosperous businesses during its “slum clearance” projects. He advanced efforts to remedy overcrowded schools and to divert Knoxville’s notorious First Creek, which flooded and ravaged a good part of the black community during the rainy season.
Through his generosity, the auditorium in the Knoxville College Administration Building was refurbished; the renovated auditorium was named in his honor. He is credited with leading the successful drive to establish the unit for blacks at the local tubercular hospital in 1928. His medical building, which was constructed in 1922, was a centerpiece for black achievement.
By Robert J. Booker 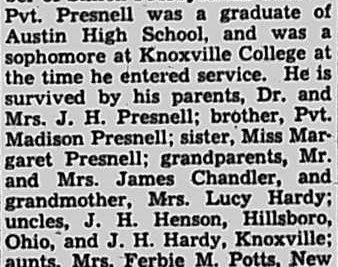