James Henderson Foster (USN-2960538) was born July 31, 1924 and died February 18, 1942 aboard the USS Pollux. He was mustered in the Navy on October 27, 1941 in Nashville, Tennessee and was assigned to the USS Pollux on December 10, 1941 as a Mess Attendant Third Class. The USS Truxton and USS Pollux ran aground near Newfoundland, broke up, and sank killing several aboard each ship. 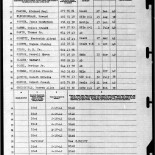 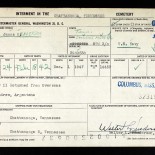