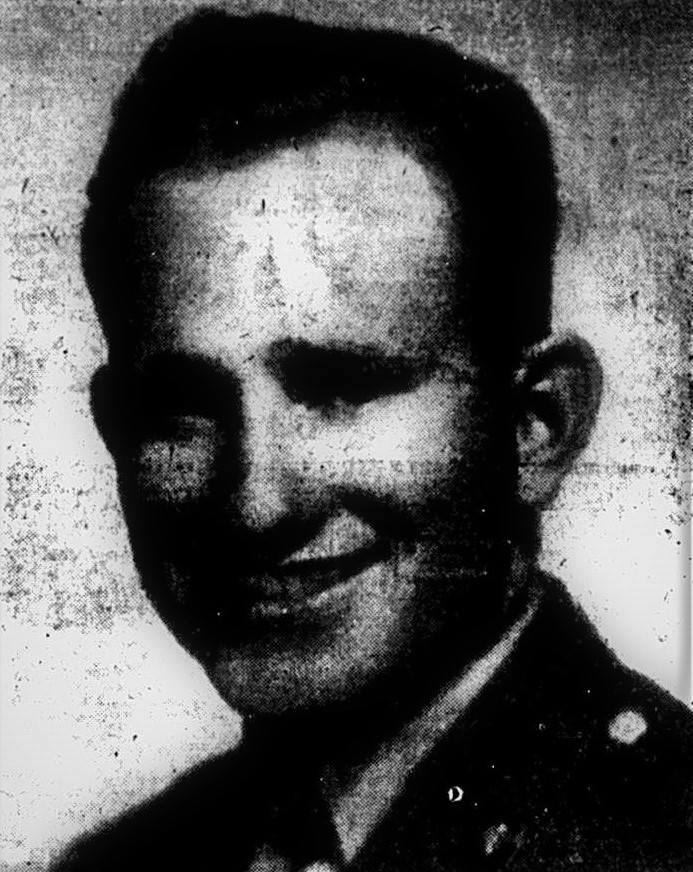 Technical Sergeant James H. Bales, US Army Air Forces, was assigned to the 506th Bomber Squadron, 44th Bomb Group Heavy, flying as the Engineer Top Turret Gunner on a B-24D named Ruth-Less. He was from Dayton, Tennessee, and he died in a crash on 2 February 1944 returning from a mission.

From the 44th Bomb Group Roll of Honor and Casualties By Will Lundy.
2 February 1944, V-1 Site Watten France:
“Military Installations were the words used to describe the target for today which we later learned meant V-1 launching sites. The mission was flown under severe icing conditions and a 1010th cloud cover over both France and Southern England. Over the target area moderate accurate flak was encountered with several of our ships suffering minor flak damage. One 506th Squadron plane crashed upon return, on the outskirts of Eastbourne. Lt Bolin, Pilot of AC #41-24282, became separated from the formation during the return. While lowering altitude in trying to find a base in Southern England, he crashed into a low hill inland from Eastbourne. Eight of the crew were killed instantly, while Sgts Wilson and Bales were taken to the Princess Alice Hospital where they both died later that same day.”

“Ruth Wulff Swanson, sister of Orville Wulff, wrote: ‘Our Parents did receive a letter from someone back in 1944, who apparently was related to or who knew the Radio Operator Chester W. Yurick who lived a short time after the crash that day-long enough to tell the details of the crash. If our information was correct, they had accomplished their mission and were then attacked and lost two to three engines, and the insturment panel was badly damaged. They were too badly damaged to return to Shipdham, so opted to attempt a landing on the coast of Eastbourne. However, being a British field, they had to establish identification before clearance for a landing, and had to circle back around Eastbourne, which was covered in a heavy cloud bank. They were cleared for landing and needed to complete the final circle and land. In that final circle, without insturments, they came in too low and couldn’t clear the hill Butts Brow. They crashed just below the crest of it.’

“A detailed description of this crash is included in the book Eighth Air Force Bomber Stories by Ian Mclachlan and Russell J. Zorn. In Chapter 8, “Hurry Home Boys,” the authors gathered eyewitness accounts, including one from a Mrs. Ellen Barrow who heard the approaching plane and wondered if it might be a German raider. However the engine sounded irregular and the plane was low. Soon therafter the bomber appeared flying slowly and looking exhausted according to Mrs Barrow. She saw an Airman standing at one of the waist-gun windows, and her heart went out to him. As it went by she whispered, ‘Hurry home, Boys’. A schoolboy, Derek Wilkinson, was outside on the grass at Willingdon Golf Course. He saw the bomber and realized that unless it gained altitude, it would crash into the nearby hills. On those hills was Audrey Armstrong, rounding up sheep with the golf-club’s greenskeeper. She heard the straining engines and saw the pilot as both realized that a crash was inevitable. The aircraft crashed into the hill and exploded. An engine tumbled down the hill near her. She and the greenskeeper ran towards the wreck once the explosions had stopped, but found only smoldering debris. Amazingly there were some signs of life. One aviator died at the scene despite receiving first aid. Two more died later at a nearby hospitial. Audrey thought that if the bomber had only been 40 feet higher it would have been able to make it to the emergency landing strip at Friston near Eastbourne.

“A stone memorial was placed at the crash site on 13 May 1995 due to the exceptional effort of Kevin Watson and through the backing of the Eastbourne Mayor. Each year a memorial ceremony is conducted at the crash site. There is also a small museum in Eastbourne in honor of this crew and the crash. It is called Ruth-less and Far from Home.”

The Dayton Herald, December 6, 1945
Memorial services for T/Sgt James H. Bales will be held at the First Baptist Church, Dayton, as part of the morning service Sunday Dec. 9. The Air Medal awarded to Sgt Bales, will be presented by Maj. Richard L. Jones, Smyrna Air Base, to mrs. Della Bales McCann, mother of the dead flier. 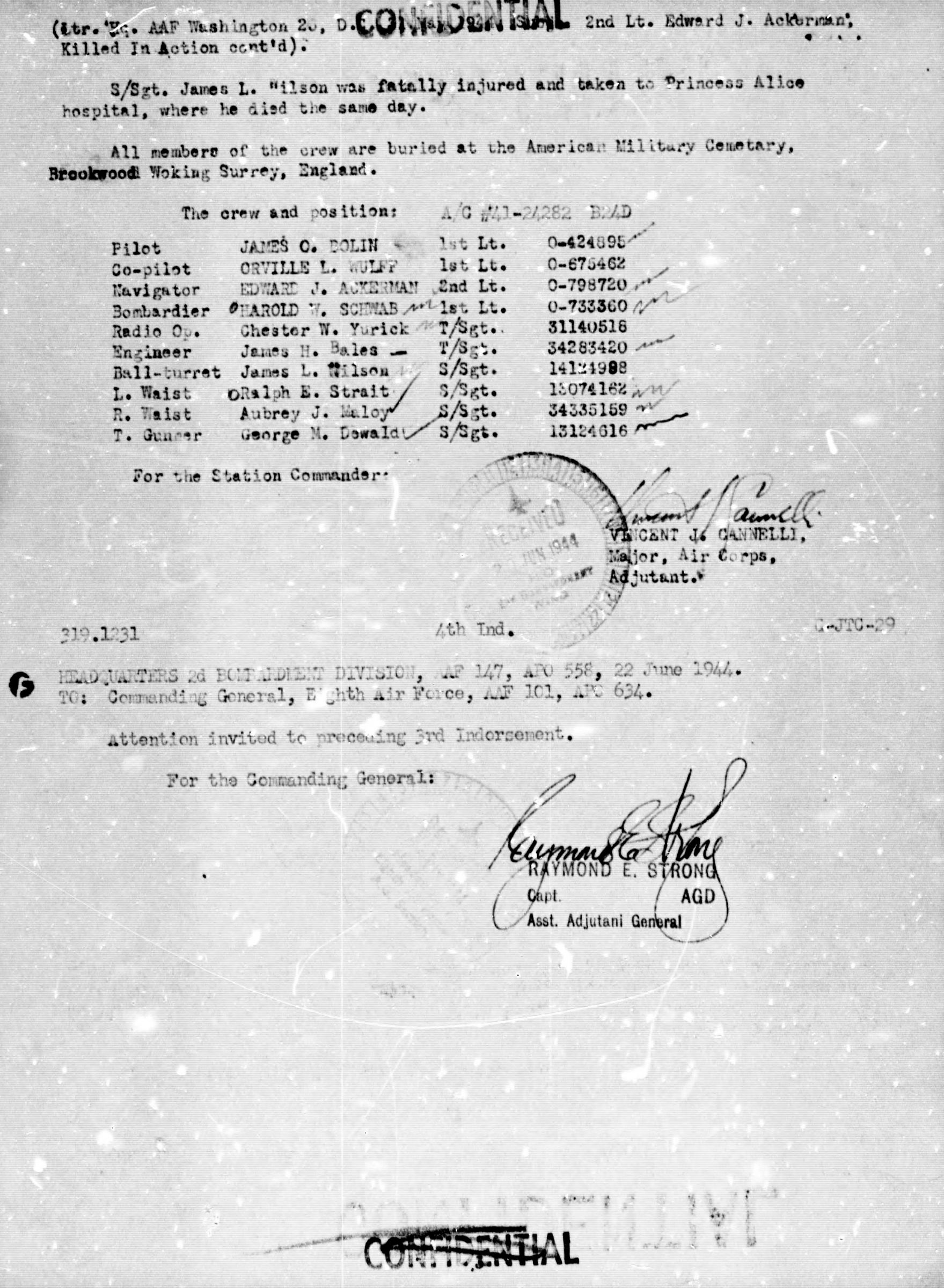 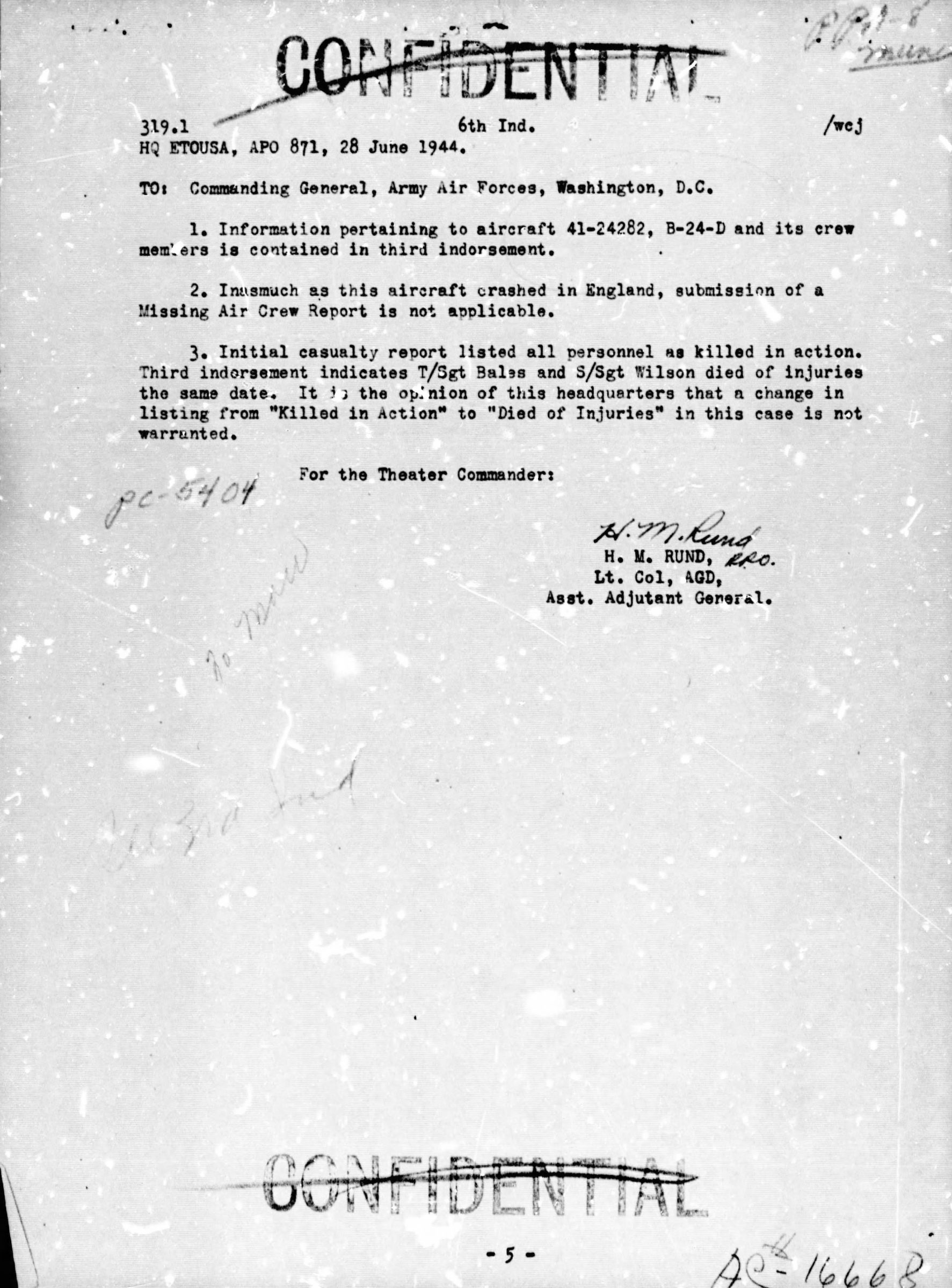 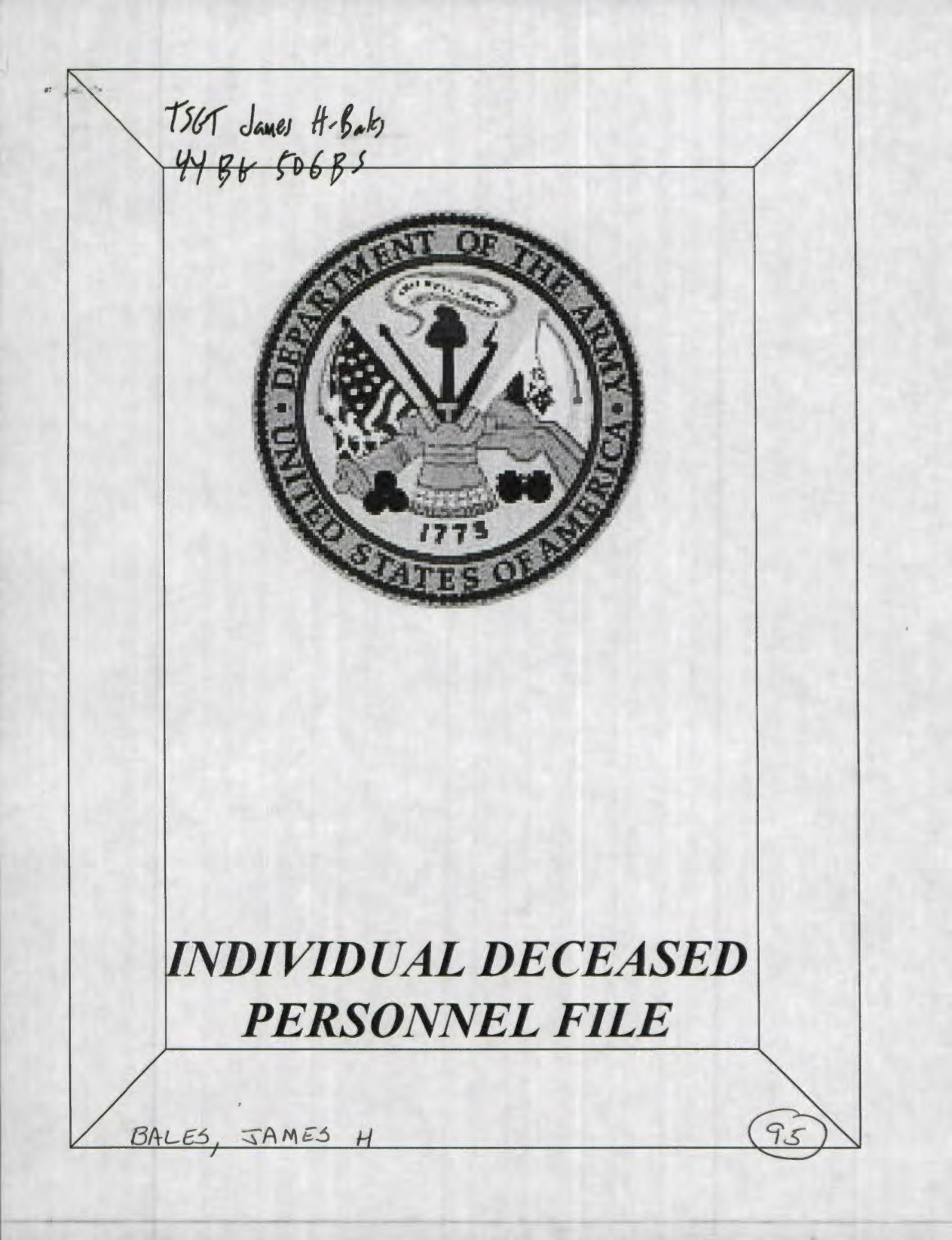 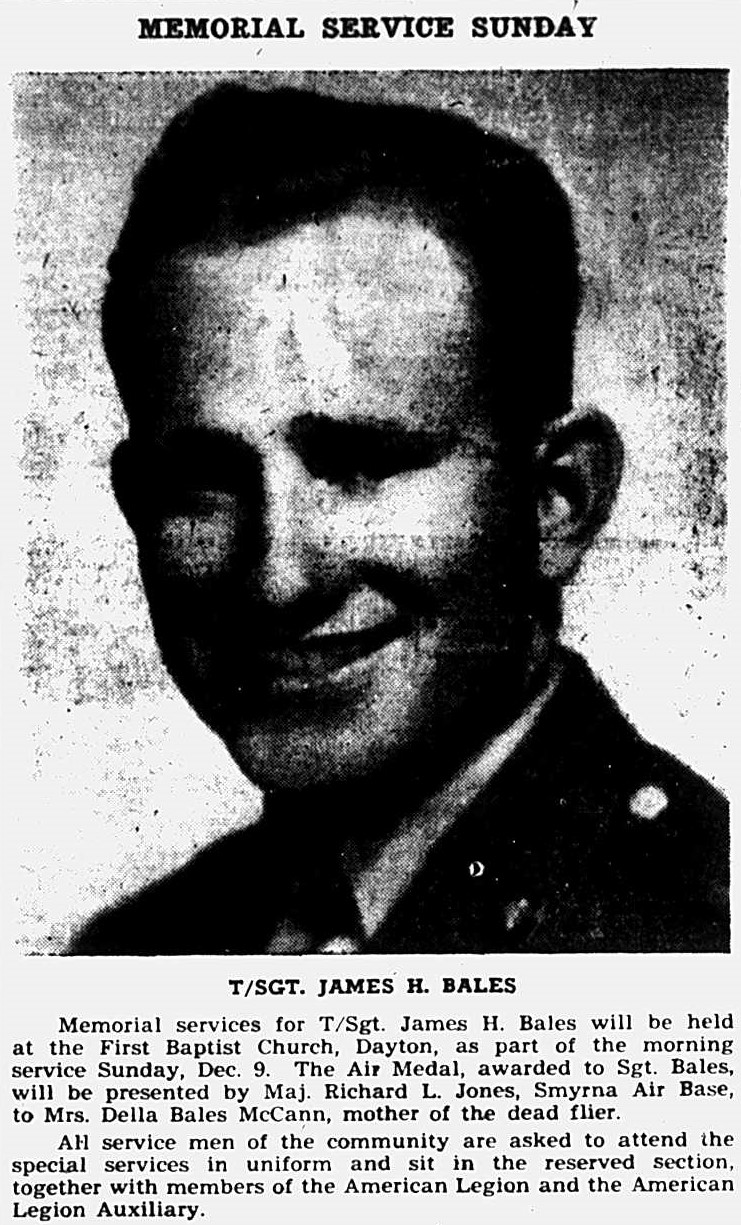