Sergeant James F. Evans, US Army Air Forces, was assigned to the 563rd Bomber Squadron, 388th Bomber Group H, flying B-17’s out of Knettishall, England. Sergeant Evans was on his fourth mission when his B-17 was shot down over the Baltic Sea. He was killed in action on 11 April 1944. He is remembered on the Tablets of the Missing, Cambridge American Cemetery, England. Awards include Air Medal and the Purple Heart.

From 388th at war by Ed Huntzinger:
Mission #92 – Poznan Posen, Poland 11 APR 1944
For this mission, the 388th furnished one Group plus the lead squadron of the Composite Group. Our A Group, with one PFF AC Pathfinder Aircraft attached, was lead for the 45th Combat Wing. The high and low squadrons were furnished by the 96th BG. We were the 3rd and 4th Wings of our our 3rd Air Division, and we followed the 4th Combat Wing. The 13th Combat Wing was to bomb Poznan, a few miles distance in Eastern Poland, at the same time.

The seven AC for the Composite Group took-off by 06h31 and the A Group followed and were airborne by 07h13. One of the AC of the A Group aborted for mechanical reasons and the three spare planes returned as scheduled.
All formations were effected without difficulty and the Groups proceeded to the target as briefed.

As the formation approached the enemy coast near Stettin, it became apparent that visual bombing was impossible, due to weather conditions. Our lead AC relinquished the lead to the PFF AC, which was flying on its right wing, and it was decided to attack Rostock by PFF. As the formation neared Rostock, the city could be seen and bombing was done visually. Bombs were away by 13h15 from 15,700 feet. The B Group also dropped its bombs on Rostock. Strike photos show bombs bursting in the city southeast of the Heinkel Aircraft works. The Wing then proceeded home across the Southern end of the Danish Peninsula. 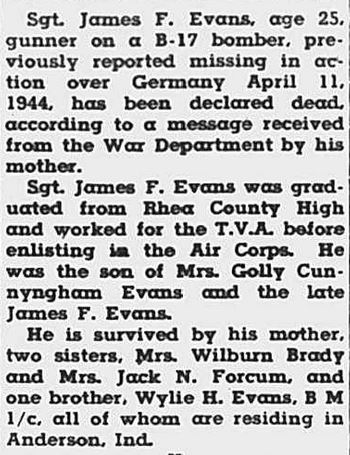