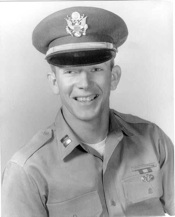 Captain James Eddie Reed was born to Kenneth and Minnie Reed in Kingsport, Tennessee. He grew up on a farm in West Carters Valley and enjoyed hunting, fishing, and exploring with his brothers and friends. After graduating from Lynn View High School he attended East Tennessee State University, where he lettered in Track and Field, excelling as a runner and pole-vaulter; and participated in the Army ROTC program.  He received his BA degree and was commissioned as an Infantry officer in the United States Army, in August 1964.

Entering active duty military service in January 1965, he graduated from the Infantry Officer Basic Course, Airborne School, and Ranger School, then served for two years as an Advanced Infantry Training Officer, Platoon Leader, and Company Commander at Fort Ord, California.  In July 1967, he was promoted to Captain and reassigned to Long An Province, Vietnam, as Company Commander of a counter-insurgency unit: Co A, 3rd/39th Infantry, 9th Infantry Division.  He commanded the company for seven months, until February 1, 1968, when he was killed in action during a heavy artillery attack as part of the Tet Offensive.  His final actions earned him the Silver Star and Purple Heart.  He is buried in Oak Hill Cemetery in Kingsport, Tennessee.  His men refer to him as “the best loved CO in Vietnam.”