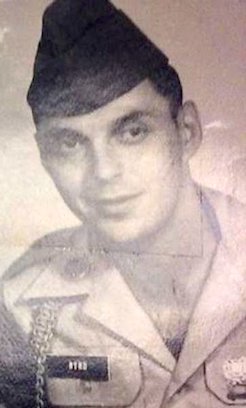 James Edward Byrd Jr arrived in Vietnam on 2 May 1968. He was KIA on 3 June 1968 at the Plain of Reeds, Kin Ton Doc canal, Dinh Tuong Province, South Vietnam. His unit was E Company,2nd Bn, 39th Infantry, 9th Infantry Division. He was killed by multiple fragmentation wounds. His name on the Vietnam wall in DC is on panel 61W, line 21. His accommodations are infantry combat badge, Purple Heart, National Defense medal, Vietnam Service medal, and Vietnam Campaign medal. He was laid to rest at Beaver Creek Brethren cemetery in Knox County. His wife was Linda Sue Hughes Byrd. His son is Tony Edward Byrd.
–Submitted by his cousin, Tony Younger

My Mother is the sister of James E. Byrd Jr. Her name is Debra J. Byrd. We have been talking a lot about family lately, as well as this great country. I have learned a little about my uncle Jimmy. I wish I could have met him. His light shone bright and was extinguished too soon. If anyone would like to reach out to my mother or myself, please feel free… (sandra.martell@outlook.com). Stay safe and healthy. Have a most wonderful New Year! *2021*
–Submitted by his niece, Sandra Martell 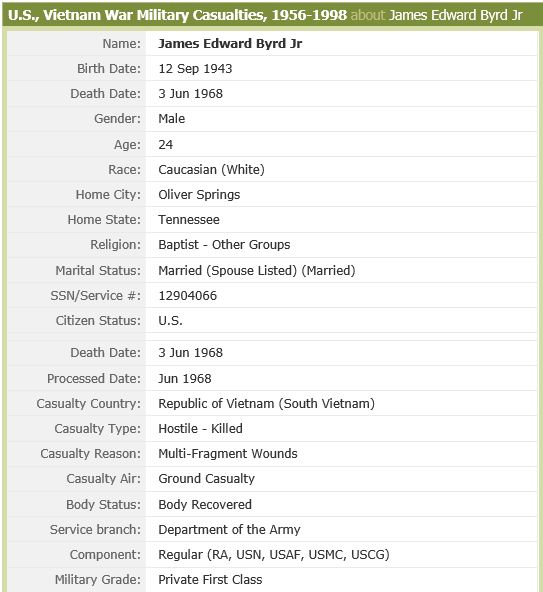 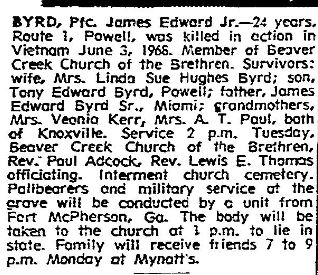 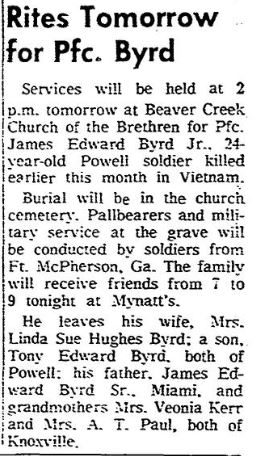