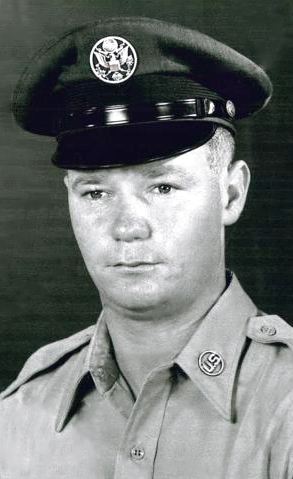 Shirley Bowman Kelly
shirley.kelly@charter.net
widow
605, Hoover Street, Johnson City, TN., 36704, USA
40Th, Anniversary
Today, May 5, 2008, marks the 40th, anniversary of my husband’s death, in a place called Pleiku, Viet Nam. I still get cold chills writing these words! For a very long time I could not speak of this event when I met new people nor read a written word about this country and this horror of war which devoured mine and my children’s lives. His name was SSgt. James E. Bowman, USAF. He was 34 years old, career Air Force and the father of two lovely daughters, ages 9 and 13. We were high school sweethearts. He was the most popular boy in our small high school, the team’s star quarterback and everyone’s friend. He was his parents’ only child, his grandmother’s favorite grandson. He had been in Viet Nam 4 months, when his plane was shot down. His parents, grandparents and family are all gone now, as well as my family. Our daughters are grown up and somehow we have managed to go on, but we have never forgotten, nor has his memory dimmed in our hearts.
May 5, 2008

Richard Perkins
chestypuller7882@aol.com
My father served with SSGT. Bowman
104, Harlesden Lane, Summerville, SC., 29485, USA
My father served with SSGT. Bowman
My father, MSGT. Marvin R.Perkins served with Jim Bowman and was a member of his flight crew. He and Jim were pretty close friends and he mentioned him often in his letters home. My father was the only survivor of the flight crew, due to the fact that their CO., LTC. Harris would not allow him to switch places with another member who had been sick earlier in the day. My father never forgot Jim or any of his fallen comrades and continued to mourn them up to the day he passed away himself, on September 29, 1998.
Thursday, May 05, 2005

Kitty Holt
kitty.holt@charter.net
Daughter
Elizabethton, TN 37643 USA
My Father
Although my father was taken away from me at the tender age of 12 I have never forgotten him nor the morals that he instilled in myself and my sister, Connie. We use to love going fishing at Watuaga Lake until the early morning. Mom would fuss at him for bringing me home so late. I always loved doing things with my dad. When my family traveled I would sit behind my dad and would call him my angel. I know in my heart that he is with me everyday and is very proud of me and my sister. I have missed him every single day since May 5, 1968. James E. Bowman was a great soldier, a loving father and a wonderful husband.
Tuesday, April 18, 2006 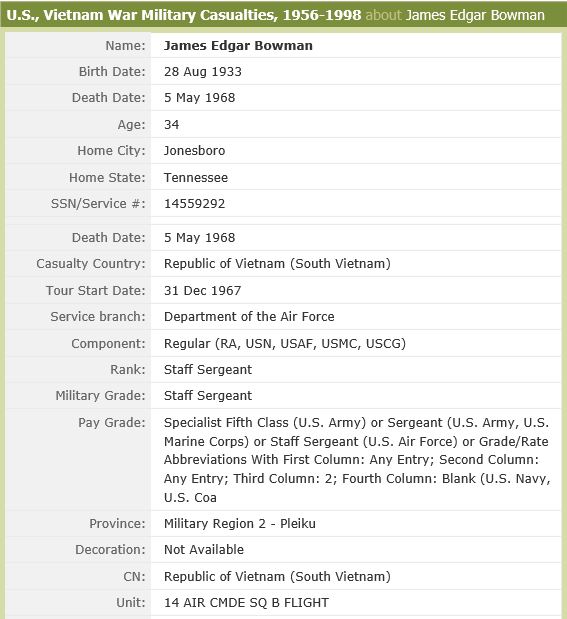 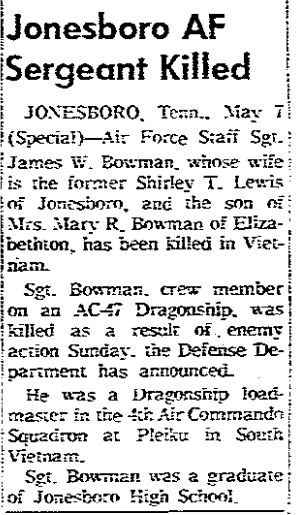