James Edward Barlow was killed in action and was initially buried at Okinawa 6th Marine Division, Cemetery No. 1 Ryukyu Retto. He was a “Mustang” (Enlisted to Officer).*

*The original definition of mustang was a military officer who had earned a battlefield commission; they were especially prevalent during World War II and the Korean War. Notable examples include Audie Murphy (World War II) and David Hackworth (Korean War). Source: Wikipedia 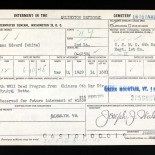 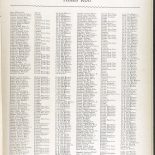