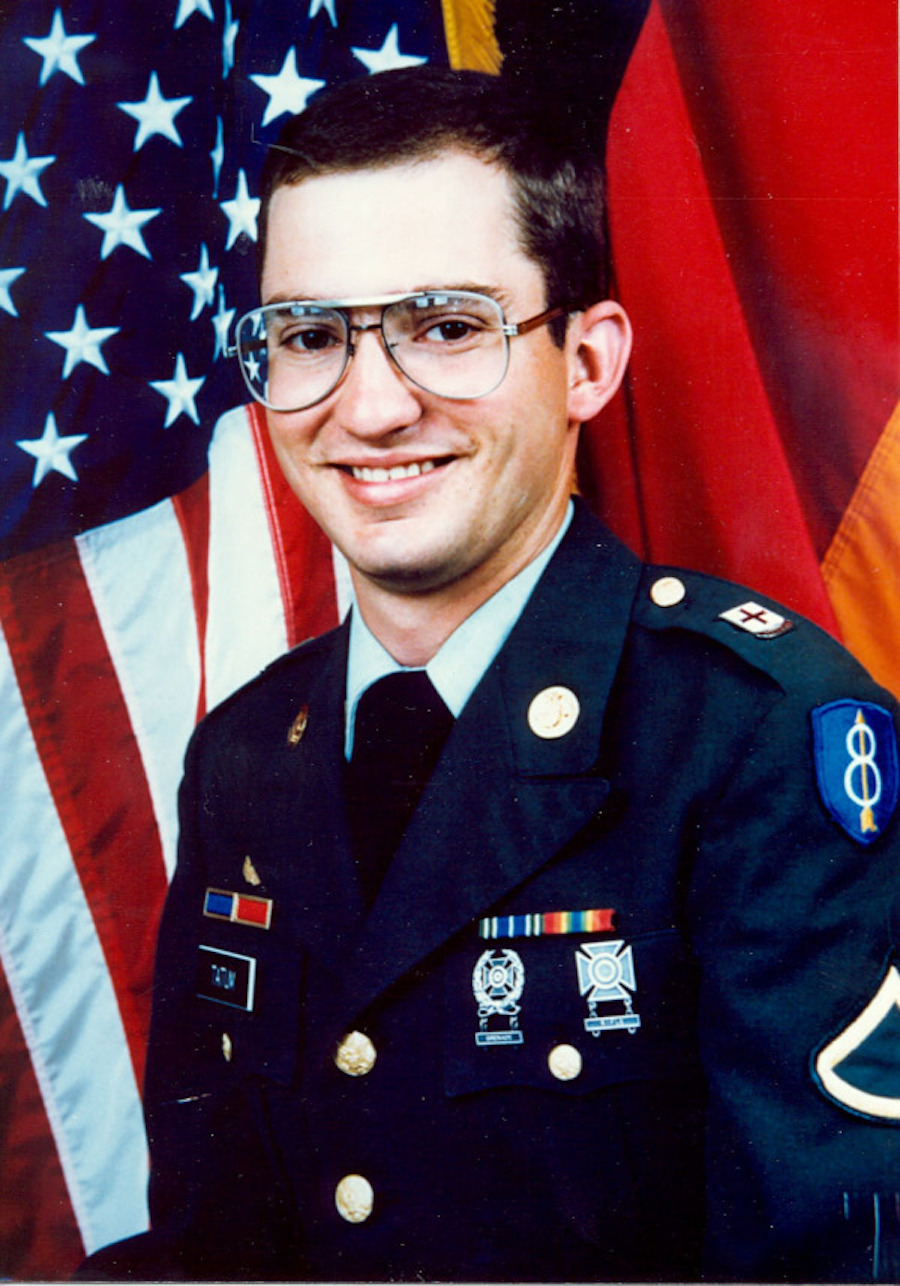 James David Tatum, a native of Riceville, Tennessee, was born on December 5, 1968. He was the son of Ray Neal and Debbie Tatum. James was a 1987 graduate of McMinn County High School and a member of Oak Grove Baptist Church.

After graduation from high school, James joined the Army and served three years as a Petroleum Specialist in the Quarter Master Corps. He was employed by Wrights Brothers Construction as a mechanics helper and a member of the Army Reserve.

Specialist James David Tatum reported for duty with the 23rd Replacement Detachment, US Army Reserves at Ft. Lee, Virginia on January 31, 1991. He was activated into service and sent with the 475th Quartermaster Group out of Pennsylvania to Dhahran, Saudi Arabia.
The following is an account from the 14th Quartermaster Detachment with whom Spc. Tatum’s 23rd Replacement Detachment was stationed with:

“The 14th Quartermaster Detachment, a United States Army Reserve water purification unit stationed in Greensburg, Pennsylvania, was mobilized for service in Southwest Asia on January 15, 1991. The unit arrived at Fort Lee, Virginia three days later to conduct intensive mobilization training in preparation for deployment to Saudi Arabia. For the next thirty days, detachment soldiers trained 18 hours a day on the Reverse Osmosis Water Purification Unit ROWPU water purification system and common soldier tasks. The unit, augmented by 35 filler personnel from other active Army and reserve units, arrived in Dhahran, Saudi Arabia on February 19, 1991. The detachments soldiers were quartered in a warehouse that had been converted to a temporary barracks. There they waited for the arrival of unit equipment and movement to a field support location.

At 840 pm 1240 pm EST on February 25, 1991, parts of an Iraqi SCUD missile destroyed the barracks housing members of the 14th Quartermaster Detachment. In the single, most devastating attack on U.S. forces during that war, 29 soldiers died and 99 were wounded. The 14th Quartermaster Detachment lost 13 soldiers and suffered 43 wounded. Casualties were evacuated to medical facilities in Saudi Arabia and Germany.”

Specialist James David Tatum was repatriated back to his hometown of Riceville and funeral services were held March 4, 1991 at Oak Grove Baptist Church. He was buried at Oak Grove Cemetery with full military honors provided by the US Army. The funeral services were attended by numerous family and friends and state dignitaries including Governor Ned McWherter, Senator Jim Sasser and Senator Albert Gore, Jr.

“Cpl. David Tatum was a quiet man who kept his emotions to himself. But words that he never planned on anyone seeing speak volumes about his feelings in the days before he went to the Persian Gulf.

‘I hope what lies ahead for me will be God’s will and he will look over me and my family during this time of twelve months,’ Tatum wrote in late January after being called up to serve with the U.S. Army. A little more than a month later Cpl. James David Tatum was dead.

The 22-year-old McMinn Countian was killed when a Scud missile slammed into a U.S. Army barracks in Dhahran, Saudi Arabia, on Monday.

His family discovered the writing, which is in the form of a journal entry, after Tatum had left home.

‘We didn’t know it was written,’ said Gordon Swallows, Tatum’s stepbrother. After he was gone they were taking out the trash, saw what looked to be a wadded up letter in the garbage.

‘We got it,’ Swallows, 25, said Friday morning in a voice strained with emotion. ‘This is how David felt.’

Tatum’s family broke three days of near silence Friday when they met with reporters on the lawn of their home just off Riceville Road in McMinn County.

A flag flew at half-staff from the porch of the small home, tucked into a quiet hillside. A picture of Tatum sat on the steps for photographers.

Swallows said the family believed it was time to speak publicly after an initial reluctance to discuss his death.

‘We felt like it was our duty,’ Swallows said. ‘He was ours but he was the nation’s.’

The family, he said, is holding up. Swallows was the spokesman for the family Friday.

‘They’re doing good now. Of course, the initial news was. . . heartbreaking,’ he said. ‘It’s still tough . . . to talk about some things. The hard parts still to come, when the body actually gets here.’

Tatum’s parents, Ray Neal Tatum and Carol Tatum, listened quietly while Swallows read a prepared statement. By the time Swallows reached the end the trio had their arms around one another. They drew especially close when Swallows, who has been trying to shield his parents during the ordeal, faltered toward the end.

‘Our sorrow in this time of loss is tempered by the notion that, in God’s world, everything has a purpose and a meaning, he said, struggling to keep from breaking down. God bless you, David. . . . We love you . . . and will all miss you very much.’

Both parents had little to say. ‘All I know is that Jesus Christ right now has his arms around him. Hes in a better place,’ Ray Neal Tatum said.

Carol Tatum, speaking with Swallows at her arm, said, ‘I’m just his stepmother, but I was his momma in his heart. I had him for 10 years and he couldn’t have been closer to me than this one her son, Swallows that’s on my right right now.’

Swallows said the family is grateful they found Tatum’s writings. He wouldn’t have been able to say what he wrote. Nothing emotional like that would he have said out loud, even though he felt it, Swallows said.

Before he left for the Persian Gulf, Tatum went to people individually. It wasn’t a very emotional goodbye. He was saying it the best way that he could, Swallows said.

Tatum joined the Army after graduating from high school and served a three- year hitch before getting out in 1990. He was working as a mechanics helper on heavy equipment when he was called back into the service.

Tatum’s family said he was proud to serve and that he died a hero.

Swallows said his brother might have had a premonition something was going to happen to him. He telephoned home often until he reached Saudi Arabia and the war heated up.

‘I feel he did. He was going to see everyone and he kept calling home,’ Swallows said. ‘He called home practically every day, sometimes two or three or four times a day, just to talk to people, to his family, to let them know he did love them.'”

Ten years later the United States House of Representatives and the US Senate adopted this concurrent resolution remembering the men who lost their life in the SCUD missile attack.

Whereas, during Operation Desert Storm, Iraq launched a Scud missile at Dhahran, Saudi Arabia early in the evening of February 25, 1991
Whereas one Patriot missile battery on a Dhahran airfield was not operational
and another nearby battery did not track the Scud missile effectively
Whereas the Scud missile hit a warehouse serving as a United States Army
barracks in the Dhahran suburb of Al Khobar, killing 28 soldiers and injuring 100 other soldiers
Whereas the thoughts and prayers of the Congress and the country remain with the families of these soldiers
Whereas this single incident resulted in more United States combat casualties
than any other in Operation Desert Storm and since
Whereas Scud missile attacks paralyzed the country of Israel during Operation Desert Storm
Whereas the Patriot missile batteries, which were used in Operation Desert Storm for missile defense, were not originally designed for missile defense
Whereas the United States and our allies still have not fielded advanced theater missile defenses
Whereas missile technology proliferation makes missile attacks on United States forces increasingly possible and
Whereas February 25, 2001, is the 10th anniversary of the Scud missile attack
which caused the deaths of these brave soldiers who died in service to
their country
Now, therefore, be it
Resolved by the House of Representatives the Senate concurring,
That the Congress–
1. on behalf of the American people, extends its sympathy and thanks to the families of Specialist Steven E. Atherton, Corporal Stanley Bartusiak, Specialist John A. Boliver, Jr., Sergeant Joseph P. Bongiorni III, Sergeant John T. Boxler, Specialist Beverly S. Clark, Sergeant Allen B. Craver, Corporal Rolando A. Delagneau, Specialist Steven P. Farnen, Specialist Duane W. Hollen, Jr., Specialist Glen D. Jones, Specialist Frank S. Keough, Specialist Anthony E. Madison, Specialist Steven G. Mason, Specialist Christine L. Mayes, Specialist Michael W. Mills, Specialist Adrienne L. Mitchell, Specialist Ronald D. Rennison, Private First Class Timothy A. Shaw, Specialist Steven J. Siko, Corporal Brian K. Simpson, Specialist Thomas G. Stone, Specialist James D. Tatum, Private First Class Robert C. Wade, Sergeant Frank J. Walls, Corporal Jonathan M. Williams, Specialist Richard V. Wolverton, and Specialist James E. Worthy, all of whom were killed by an Iraqi missile attack on February 25, 1991, while in service to their country and
2. resolves to support appropriate and effective theater missile defense programs to help prevent attacks on forward deployed United States forces from occurring again.

Passed the House of Representatives February 27, 2001.

In Veterans Memorial Park in Athens, Tennessee, a monument was erected in memory to Specialist Tatum. The memorial reads:

“In memory of Spec. James David Tatum
He that dwelleth in the secret place of the Most High shall abide under the shadow of the Almighty. Psalm 9:11
We the county of McMinn and the city of Athens have joined together with United We Stand to erect this monument in memory of Corporal James David Tatum and in honor of all veterans past, present, and those to come. The bravery of these men and women to stand, to fight, and if need be to die has gone to make the United States the free country it is today. Let us be ever mindful of those few who give so much.” 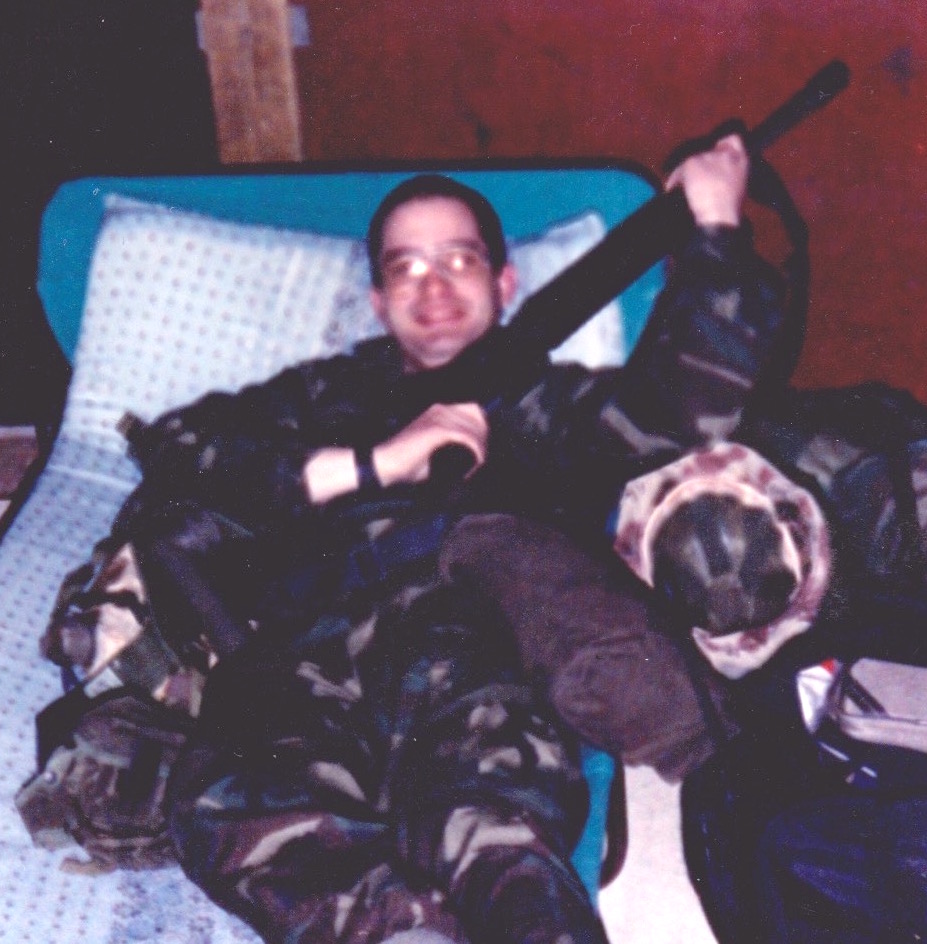