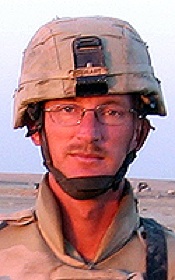 James Douglas Stewart was 29 years old when he was killed.
An improvised explosive device destoyed the truck he was driving in a convoy. Stewart’s commanding officer told his mother he had just minutes earlier swapped out the mission with another soldier.

Stewart was born in Fort Oglethorpe, Georgia, and when he was five moved with his sister Marilyn to St. Petersburg, Florida. James Stewart finished his high school years at Dixie Hollins High in St. Petersburg, and was in ROTC.

Stewart spent 11 months in Kuwait before going to Iraq. He is buried at Bay Pines National Cemetery, Pinellas County, Florida, 54, 96.