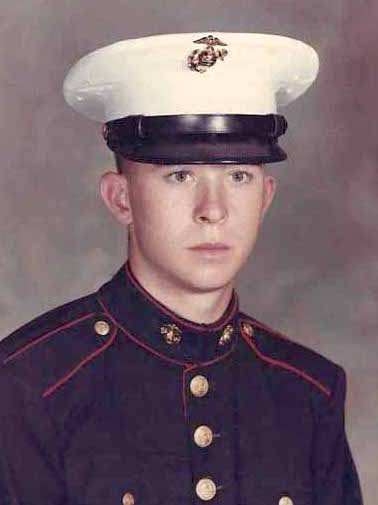 M. A. LAU
Friend!Fox Co. 27, 1st MarDiv, FMF
PFC James D. Kelley Aways a Marine, forever a Hero!
PFC James Daniel Kelley and I were good friends in Vietnam. We were Marines in Fox Company, 2nd Battalion, 7th Marines, 1st Marine Division, FMF. In June 1968, we both joined up with Fox Company in the Philippines. We completed several weeks of Jungle Warfare training and then we boarded the USS Ogden and headed for SE Asia via the South China Sea. We had no idea that we were heading straight into hell. Jim was born in Greeneville, Tennessee on November 13, 1948 and was only 19 and a half years old when he was killed in action. Jim had been in Vietnam for three months and had already participated in 4 or 5 major combat operations. PFC Kelley, who was a rifleman, showed extraordinary heroism on September 19, 1968, during Operation Mameluke Thrust, also know as Operation Dodge City. Fox Company was conducting a reconnaissance in force in Quang Nam Province when we encountered a large ememy force employing heavy automatic weapons and accurate sniper fire which pinned down elements of the company and caused numberous casualties and wounded in action. Disregarding his own safety, he fearlessly exposed himself to the intense hostile fire where he succumbed to his bullet wounds. His bold initiative and heroic efforts inspired all who observed him and contributed immeasurably to the accomplishment of Fox Company’s mission. By his courage, sincere concern for the welfare of his fellow Marines and unwavering devotion to duty, PFC Kelley upheld the highest traditions of the Marine Corps. He gallantly gave his life for his country. The following 14 Marines died that day with PFC Kelley Cpl Thomas Cavanaugh Sgt Raymond Conway PFC Michael Figueroa LCpl Mark Knollmeyer LCpl John Krol PFC Peter Matarazzo PFC Terrence Moran PFC Gary Noles Pvt Francis Rhoades LCpl Roy Rich LCpl Pedro Rodriques Cpl Edgar Smith PFC Mark Triplett LCpl Philip Wajda. Jim, you will never be forgotten. Even as the years pass, Vietnam keeps coming back to us. You gave the supreme sacrifice for your country. You served the Corps honorably and died gallantly in battle. PFC Kelley will always be a Marine, and forever a Hero. Love and miss you. Semper Fi
Thursday, May 12, 2005