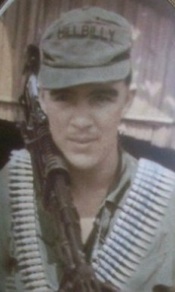 Specialist Four James Calvin Thomason was a casualty of the Vietnam War. As a member of the Army Selective Service and a Draftee, SP4 Thomason served our country until February 23rd, 1968 in Binh Hoa, South Vietnam. He was 20 years old and was married. It was reported that James died from small arms fire. SP4 Thomason is on panel 41E, line 001 of the Vietnam Memorial Wall in Washington D.C. He served our country for one year.

He was a hunter and a very good one. He actually got a marksman medal early in the military because he was such a good shot. We were a poor family so our meat came from out of the wild. He could shoot a squirrel from a long way with a 22 rifle. We were dependent on his and my father’s hunting skills for meat on the table. He loved his old 57 chevy which he owned at the time of his death. He loved his wife and son but still did what he felt he should do to serve his country and went when he was called to duty. Sue Thomason Renfrow, His Sister.

James Calvin Thomason was My Cousin and we played togather as Kids, We called him Butch. We all Miss him. He was A very good Soldier.
– 1SG Retired Tom Hackler