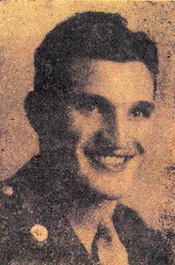 Crossville Chronicle, September 7, 1944
Pfc. James Carl Fox, who was kiled in action July 15, in Italy, has been posthumously awarded the Purple Heart Medal; the medal having been sent to his wife, the former Miss Mary Elma Loshbough, Cumberland Homesteads. Mrs. Fox received teh official notice of her husband’s death on Thursday, Aug. 3. Carl graduated from Cumberland Homesteads High School in the class of ’42. Prior to his induction into the Army in 1942, he was employed by S.T. Williams of Cumberland Motor Co.
Carl had his basic training at Santa Rosa, Calif., and his advanced training at Camps in Georgia, South Carolina, Florida and Mississippi. In March, 1944, he was awarded the Good Conduct medal and soon after was sent to Fort Meade, Maryland for completion of overseas training. His last furlough was in April. He landed in North Africa early in May and was sent to Italy, almost immediately afterwards,
His wife and their daughter, Maryoln Carol, make their home with her mother, Mrs. Roy Loshbough, Pidgeon Ridge Road.

Crossville Chronicle, June 30, 1949
Last rites for Pfc. James Carl Fox, who made the supreme sacrifice for his country during teh Italian campaign in the summer of 1944, are schedulred for July 1,  in the Church of Christ. Interment will take place in the city cemetery with Billbrey’s in charge. Military rites will be given by members of the American Legion Post 1963 and 238, and Veterans of Foreign Wars, West-Buttram Post 5025.
The official notice of his death, which occured July 11, 1944 was received here on July 15. Arriving here Thursday by rail and accompanied by military escort, the remains will be taken to the family home to remain until a short time before the services Friday.