Prior to his tour in Korea, he was a resident of the community of Forbus in Fentress County.

Upchurch was a Light Weapons Infantryman with the 35th Infantry Regiment, 25th Infantry Division, United States Army. He was killed in action in North Korea on April 25, 1951, while engaging the enemy near Yongpyong River.

Private Upchurch was returned home after the war and was buried November 19, 1954, at the U.S. National Cemetery in Knoxville. 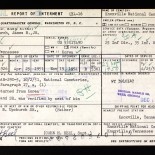