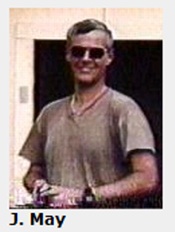 May joined the Air Force under the delayed enlistments program and left right out of high school. He had served with the Air Force from 1968-1991. He had been stationed with the 33rd Fighter Wing and the 51st Fighter Wing at bases in Tampa, Florida, Ubon, Thailand, Zaragoza, Spain, and Eglin Air Force Base in Galveston, Texas. May was last stationed at Hurlburt Field in Galveston from 1979-1991 with the 16th Special Operations Squadron. He was married to Master Sergeant Christina L. May, also in the Air Force, and had a son, Scott, and a daughter, April, all of Fort Walton, Florida.

May was a gunner aboard an AC-130 Spectre gunship and was mobilized to the Persian Gulf to participate in Operation Desert Storm. The gunship would seek out enemy targets and neutralize them or direct other aircraft to the enemy location. On January 31, 1991, the Spirit 03 gunship was providing support for ground forces defending the town of Khafji from Iraqi Armor and ground troops.

The following is an account from an article entitled Spirit 03 and the Battle for Khafji:

At 0600 hours on the morning of January 31, Spirit 03 was the last of three AC-130 Spectre gunships on station to provide close air support for the embattled Marines on the ground. Spirit 03 was due to end its patrol when it received a call from the Marines — they needed an enemy missile battery destroyed. Despite the risk of anti-aircraft artillery fire, and the greater danger of the morning sun casting light on the circling gunship, the crew of Spirit 03 chose to remain and destroy the position requested.

Soon after eliminating the target designated by the Marines, a lone Iraqi hoisted an SA-7 Grail man-portable surface-to-air missile to his shoulder. In the dawn of the early morning light, the form of the large AC-130 slowly became visible in the skies over Khafji. The decision to remain behind to support the Marines cost the pilots and crew of Spirit 03 their best defensive weapon — darkness. The Iraqi pointed the weapon at the aircraft, and fired. The missile found its target and at 0635 hours the aircraft sent out a mayday distress call and then crashed into the waters of the Persian Gulf. All crewmembers were killed.

May was among the fourteen who crashed into the twenty-five feet of water in the Persian Gulf. He had completed the qualifications for senior master sergeant and was promoted posthumously to his new rank. After the crash, the crew was officially listed as missing in action. When the Gulf War was over and the prisoners of war returned, minus the crew of the Spirit 03, the Air Force discovered the wreckage of the AC-130 in the waters off the Gulf.

The military protocol was to bury the remains recovered in a centralized National Cemetery such as Jefferson Barracks National Cemetery. However, at the request of the families of the fourteen crewmen, each family was allowed to bury in their hometowns. May was buried by his family at Barrancus National Cemetery in Pensacola, Florida.

The President of the United States of America, authorized by Act of Congress, July 9, 1918 (amended by act of July 25, 1963), takes pride in presenting the Silver Star (posthumously) to Master Sergeant James B. May II, United States Air Force, for gallantry in connection with military operations against the forces of the Republic of Iraq, while serving as Gunner of AC-130H Spectre Gunship “Spirit of 03” of the 16th Special Operations Squadron, U.S. Air Force Special Operations Command, in action against the Iraqi Army near Khafji, Saudi Arabia, on 31 January 1991. On that date, while performing an Operation DESERT STORM AC-130H armed reconnaissance mission, Sergeant May was tasked to engage a free rocket over ground missile site. As the right scanner, Sergeant May assisted the aircrew by calling evasive maneuvers to the pilot as he began firing 40 and 105 millimeter munitions at the target. While engaging the target, the air crew received heavy fire from numerous anti-aircraft artillery sites. His courageous and aggressive attack continued while under unceasing anti-aircraft artillery fire preventing a missile attack on allied coalition forces. The actions of Sergeant May aided the allied forces in repelling the Iraqi Army incursion south into the Saudi Arabia border town of Khafji. The professional competence, aerial skill, and devotion to duty displayed by Master Sergeant May in the dedication of this service to his country reflect great credit upon himself and the United States Air Force.