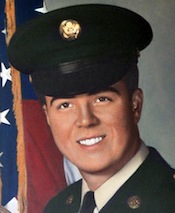 Jack Wayne Miller was killed in action near Saigon, Vietnam.

Born on July 4, 1947 in Friendsville, Blount County, Tennessee where he lived for the first 18 months of his life after which his parents, James H. and Edith Greene Miller (natives of Friendsville) moved to Indiana for James to find work. The Miller family lived in Wayne County, Indiana (Richmond and then primarily Fountain City), and Jack graduated from Whitewater-Fountain City High School in the Class of 1965.

After graduation, Jack worked for a year at the Wayne County Highway Department and saved money to attend Ball State University in Muncie, IN. In the fall of 1966, Jack enrolled in Ball State, but he received his draft notice before he began his studies.

on the night of January 1 – 2, 1968 , the 2-22 Infantry (Mechanized), 3-22 Infantry, and the 2-77Artillery were involved in a massive human wave attack by four battalions of NVA and VC at a place called Fire Support Base Burt in Vietnam. Throughout the night, the 22nd Infantrymen, supported by their artillery brothers and helicopter crewman from the 187th and 188th Assault Helicopter Companies fought back against the determined enemy assault. When the firing stopped between 0530 and 0600 the next morning, The Americans were victorious in repulsing the attack. Over 401 NVA and VC were killed with American losses at 23 killed and 153 wounded.

Listed below are some genealogy facts about Jack and his Blount County and Cades Cove (in the Great Smoky Mountains National Park) heritage: