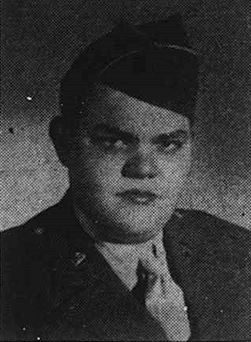 Jack Clevenger was the son of Carl Reed Clevenger and Essie Harrison. He entered the service on 16 February 1943 at Fort Oglethorpe in Georgia and died in Belgium.

The Knoxville News-Sentinel January 17, 1945
Sweetwater – PFC Jack I. Clevenger, only son of Mr. and Mrs. Carl R, Clevenger, was killed in action, Dec 31 in Beligum, the War Department notified the parents. He was 20. PFC Clevenger was inducted in February 1943 and assigned to a tank outfit. He went overseas a year ago and was with the Sixth Armored Division, Patton’s Third Army. He was formerly employed at Alcoa. A brother, Sherley Clevenger, was drowned at Lowe’s Ferry three years ago.
PFC Clevenger was a nephew of Mrs. Stella C. Bales, Knox County. General Sessions Court deputy clerk and a grandson of the late Rev, J. H. O. Clevenger.

The Sweetwater Valley News , December 2, 1948
Services for PFC Jack I. Clevenger, son of Mr. and Mrs. Carl Clevenger of Sweetwater, will be held at the cemetery Sunday afternoon. Rev. O.D. Fleming, former pastor of the Sweetwater Baptist Church, will officiate.
PFC Clevenger was killed in action in Belgium Dec. 31, 1944. He was 20 years old and a graduate of Sweetwater High School. He was serving with the Sixth Armored Division under General Patton and was in service for 21 months.
The body was formerly interred in Grand Failey Cemetery in northern France.
He is survived by his parents. The VFW post will be in charge of military honors. 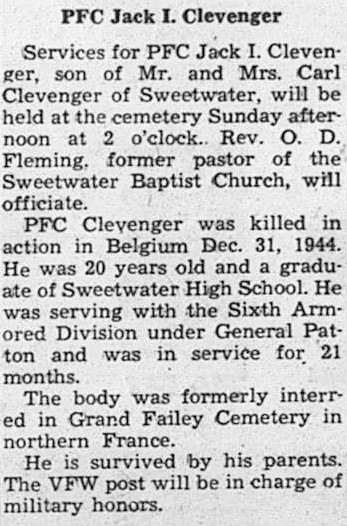