Corporal Jack Hohman of Anderson County, Tennessee was born around 1932. He was a member of Headquarters Battery, 82nd Anti-Aircraft Artillery (Automatic Weapons) Battalion, 2nd Infantry Division. He was taken prisoner of war while fighting the enemy near Kunu-ri, North Korea on December 1, 1950 and died while a prisoner on April 30, 1951. His remains were not recovered. His name is inscribed on the Courts of the Missing at the Honolulu Memorial. Corporal Hohman was awarded the Prisoner of War Medal, the Korean Service Medal, the United Nations Service Medal, the National Defense Service Medal, the Korean Presidential Unit Citation, and the Republic of Korea War Service Medal.
Finding of Death date 30 April 1951. 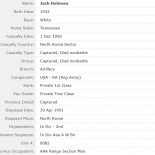