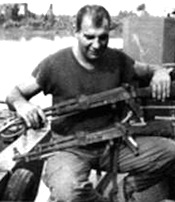 Fayne Willis, friend and neighbor
fvictory@aol.com
8300 Cambridge Woods Lane, Knoxville, 37923
Remembrance
I grew up next door neighbors to Jack and his sister, Helen. They were wonderful playmates and friends. I eventually followed Jack into the Navy and served on the River Patrol Boats Sep 67-Sep 68. Jack followed along later to serve on the patrol boats much to my surprise as I thought he was too valuable to the submarines to leave them. At his funeral I presented the flag to his mother, Louise, a second mother to me growing up. I think of him often because of our shared war experiences and the friendship I shared with him and his family. I visit him at the wall at every opportunity. Jack, you are remembered!
Jul 26, 2007

John Troia, friend
stargazer7058@aol.com
7058 Overlook dr.,  FT. Myers,Fla. 33919 U.S.A.
We miss you Jack, you’ll never be forgotten
Jack and I were friends from the mid 60’s until his death on 1 July 69. I was the reason he went to RVN. When I came home I went to see Jacks mom with Mike Bailey MMCSSS. Jacks mom gave me a picture of Jack on Argonaut ss 475 and one of Jack in his CPO uniform,but i don’t need any pictures to remember Jack he’s always in my heart. I miss you Jack.
Wednesday, November 10, 1999

Chuck Harold Cobb, cousin
1124west 16th, Spokane, WA 99203 usa
rembering
sorry buddy, I remember we used to play warcowboy on the hills around my home in NC. I miss you and think of you often. I lost many friends oveer there and had just come back when i learned of your death. Only Norman who is with you now knowswhat we did and how it was for us. Love and miss you always HAROLD.
Tuesday, June 07, 2005

Ken Tomlinson, shipmate friend
katcoinc@prodigy.net
POB 18331, Asheville, NC 28814 USA
I served on the uss Argonaut with Jack from 1957 until his transfer, I considered him a good friend then and will always remember him as such.I lost track of Jack after that and only recently learned of his death. God bless you Jack and those who gave their all
Monday, April 30, 2001

Winston Boyes, Shipmate
WLBoyes@att.net
109 Shade Tree Circle, Easley, SC 29640 USA
I sailed with Jack on the Alexander Hamilton SSBN 617 for 6 patrols between 1964 and 1967. Jack was a bit larger than life. You couldn’t have a better friend, and he made a friend of everybody he met. If you ever needed someone to watch your back, you could count on Jack. It was fairly recently that I heard of his loss and I was dumfounded until I remembered Jack liked being where things were going on. We’ll miss him.
Saturday, October 18, 2003

Robert Corder, Shipmate
robcord@aol.com
1278 Wespanee Place Court, Charleston, SC 29407-5363 United States
Jack served on the USS Trumpetfish SS425 1960-1963as an Auxillary man. As a second class petty officer he ruled the Control Room. Jack was alway ready to help non-quals and freely gave of his knowledge and time. He wasn’t easy but alway fair. I knew of his service in Vietnam and always field questions about him when I meet our shipmates. Jack left a legend and I think that’s what he wanted.
Wednesday, December 14, 2005

Charles Tiffin MMCSS USN ret., Shipmate
cob617g@hotmail.com
114 Briarcliff Trl, Uvey, Ga 31031 USA
I knew Jack while serving on Chivo SS341 an he was on Trumpetfish SS425. He came to Alexander Hamilton SSBN617G and worked for me there. He was one of the best shipmates I ever knew. If you ever needed a friend, he was it. You could always depend on an honest answer from Jack, whether you liked it or not. He is missed.
Monday, February 27, 2006

Jack & I lived next door to each other for many years. We played football & baseball & always had each other’s back. Then all of sudden we were grown! And he invited me to the movie.
We got all duded up and were amazed at how grown up we looked. It was a fun night.
Then he left for the Navy and our lives changed forever.
I still miss my adopted brother.
–Rita Willis, Sister by Choice 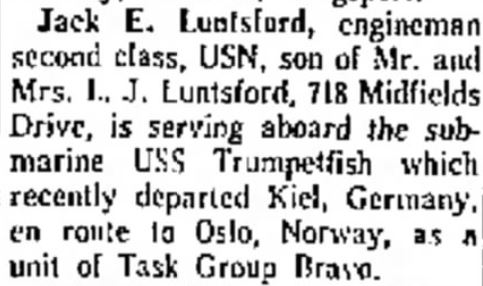