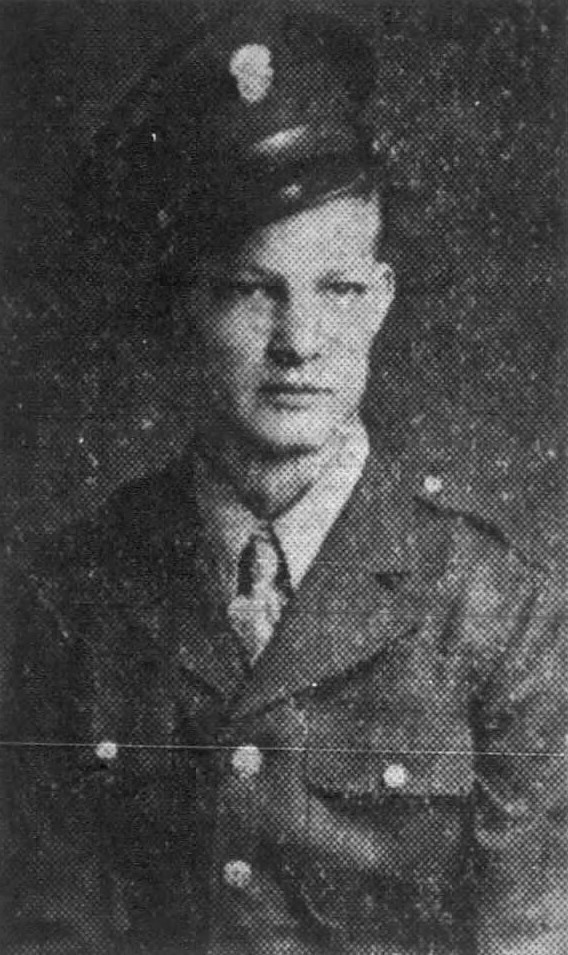 Jack Austin Slagle was born in Elizabethton to James Austin Slagle and Bertha Alice Lowe. He had one brother, William Eugene Slagle.

Aircraft B-17F with serial number 42-5052 departed from Molesworth, England on a bombardment mission to Aschersleben in Germany. #1 and #2 engines were smoking after passing through area of A/A gunfire. A/C was under control and descending when last seen. It crashed near Nordhausen, Germany.

Sgt Slagle didn´t bail out. It is believed that he was killed in the plane. He was initially buried at the Cemetery of Moenchen Gladbach, Grave 394.

The Elizabethton Daily Star, August 1, 1945
Word has been received from the War Department by Mr. and Mrs. J.A. Slagle of 807 Tipton Street of the death of their son, Sgt. Jack Slagle who was killed in action Feb. 22, 1944. He had previously been listed as missing. Sergeant Slagle entered the service in 1942 and went overseas December 1943. He served in the Army Air Corps on a bomber. In a letter received by the family from Jim Moffat, a member of the same crew, he describes the attack upon the ship as follows: “On Sunday, Feb. 20 we started combat operations by bombing Bernberg, Germany. On Monday, we went to Wern, Germany and on the 22nd our target was aircraft plants at Aschersleben, Germany. Shortly after we left Aschersleben we lost an engine and could not feather the prop. The result was that we could not keep up with the other bombers and had to continue across Germany alone. When we passed nar Cologne we were subjected to heavy anti-aircraft fire and immediately afterwards by six or seven German pursuit ships. Our plane was severely hit by enemy fire, two engines were knocked out of operation and our controls were damaged so that we were rapidly losing altitude. The enemy fighters would not gives us a chance to make a crash landing, so I turned on our alarm bell and gave the signal over the interphone to bail out. Your son did not get out of the ship before it crashed. He may have been killed by machinegun fire which raked throough the center of our plane and if not his death was instantaneous when our plane struck the ground. The Germans told me shortly afterwards that your son had been killed. I believe he is buried at or near a German airfield in Cologne, Germany.”
Sergeant Slagle was an employe of the American Bemberg Corporation before entering service. He has another brother William Eugene Slagle, AM 3/c who is stationed at the U.S. Naval Air Station in Miami, Fla. 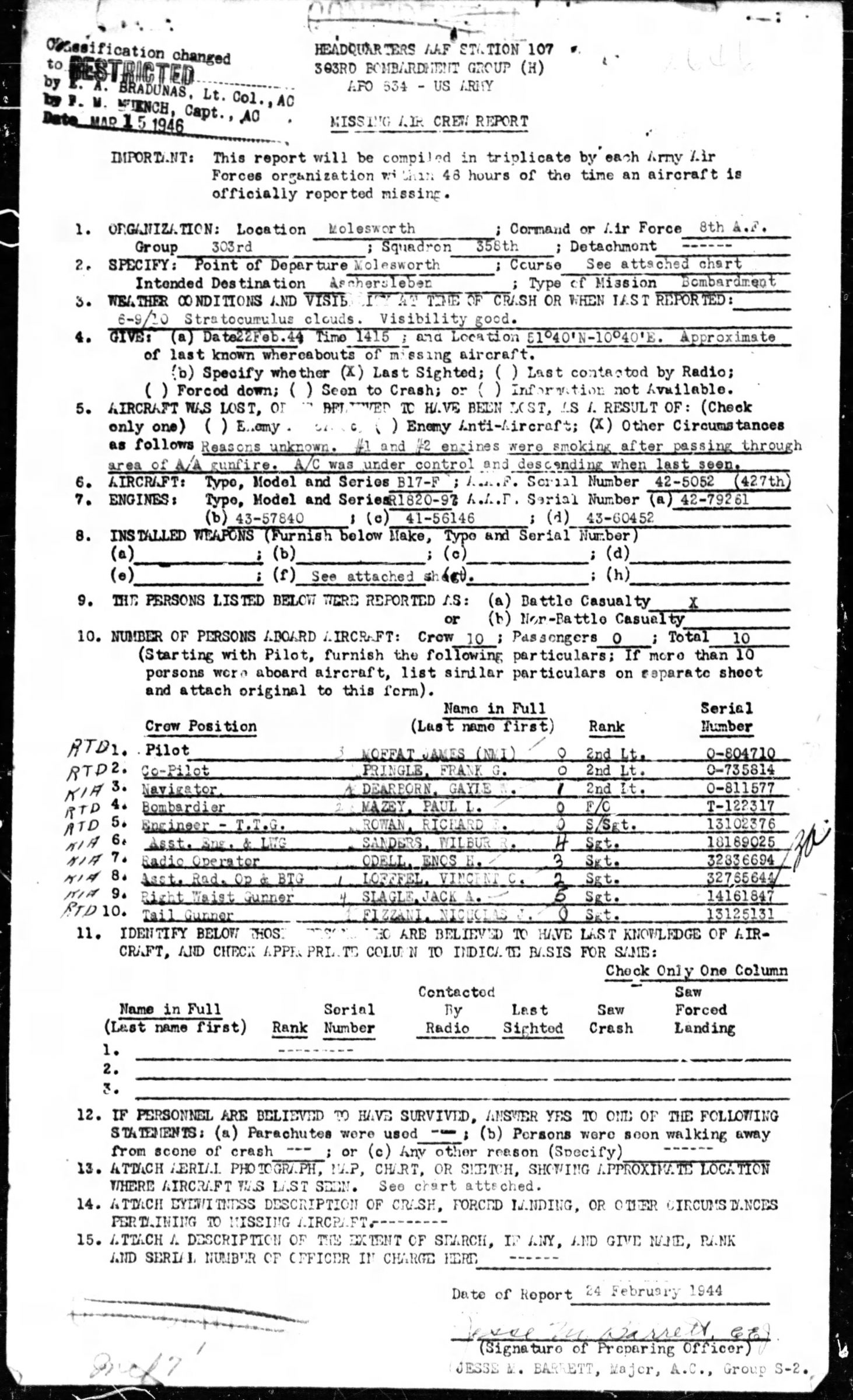 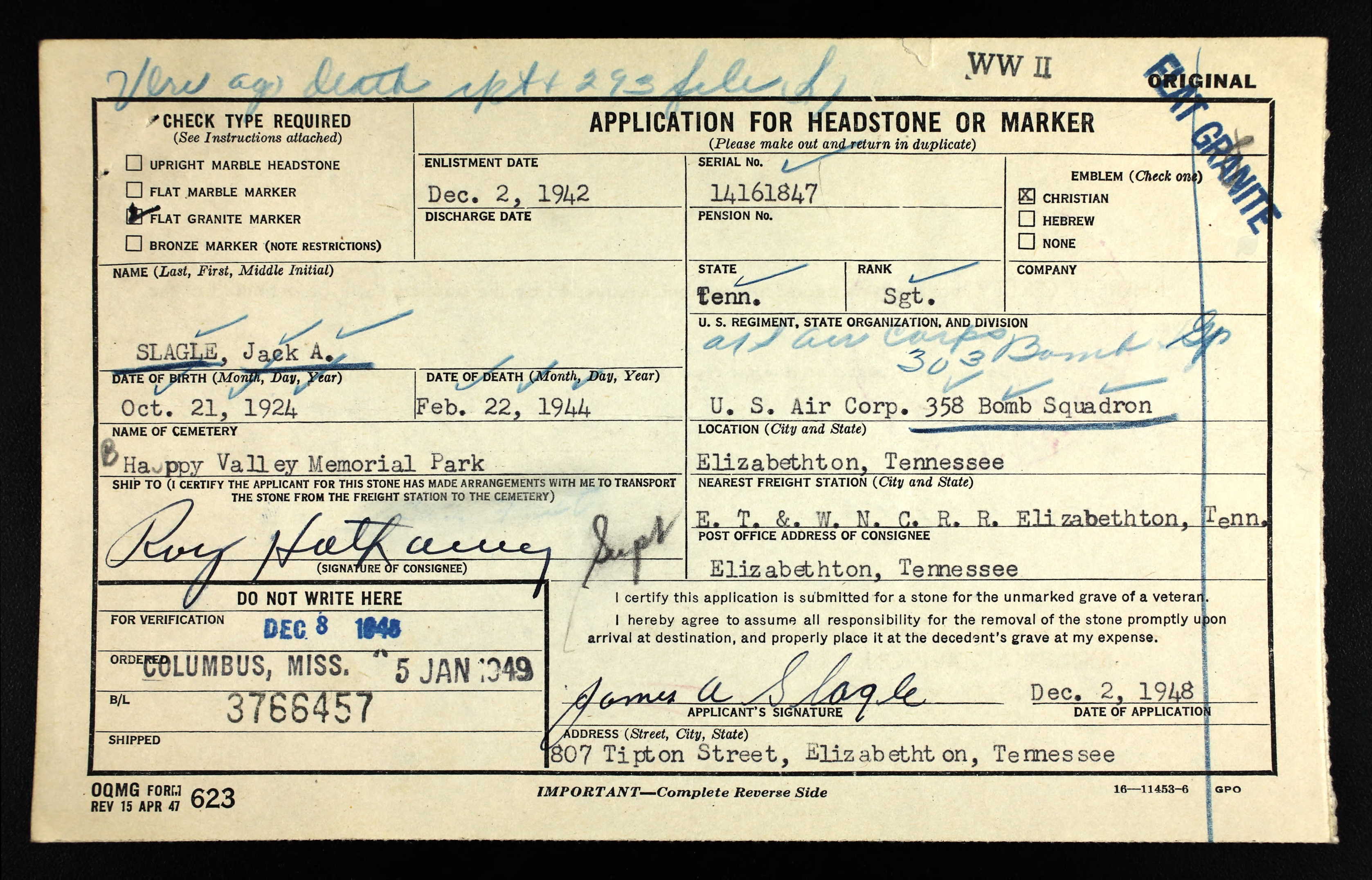 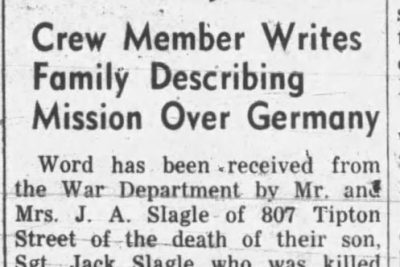 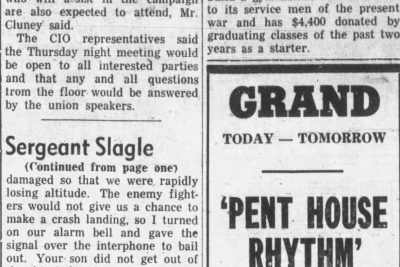