The Greeneville Sun, August 7, 1945
A swimming and fishing outing on Lack Creek yesterday afternoon ended in tragedy when J.V. Poe, Seaman First Class, who was at home on furlough was drowned. A party of twelve young men had gone to the spot on Lack Creek near the place where it empties into the Nolichucky River to fish about seven o’clock, just a dusk, most of them had gone into the water and were having a gay time swimming. One of the party on the bank heard some call in distress but all were romping and plaing and he thought the call was just in fun. About fifteen minutes later when they got out young Poe was missing. They called and searched, and then really alarmed went to the home of Walter Cooper nearby to get a boat and flashlights. They soon found the body of the dead sailor in seven feet of water. He had been under less than half an hour and first aid was given every effort being made to resuscitate him. He was taken to the home of a physician nearby, and he tried without success to revive him. No explanation of the accident was given, as Poe was said to be a good swimmer. It is thought he may have been stricken by a cramp, and in the play his difficulty was not recognized, and he drowned without his companions realizing what had happened.
He is survived by his wife, Mrs. Virginia Poe, one daughter, Mitzi, his parents, Mr. and Mrs. Enoch Poe, three brothers, Arthur Gay and Louise Poe, five sisters, Mrs. Bessie poe, Mrs. Edith Cox, Mrs. Dora Parker, Mrs. Kathleen Brooks and Mrs. Mildred Poe. 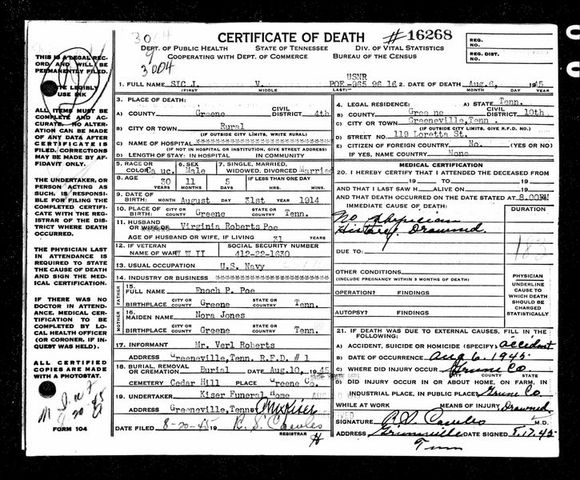 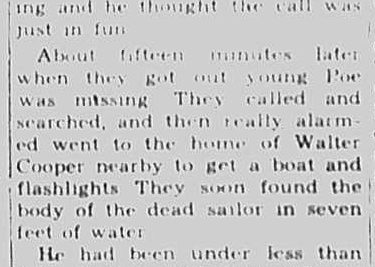