T/Sgt J.H. Swanner was an Engineer on aircraft B-17E, Serial number 41-2525, Nickname Madame X. They departed from Henderson Field on 10 June 1943 and took the South Route to Treasure Island. Their intended misstion was to strike the Kahill Airdrome.
Search for this missing crew was made on 11 June 1943 by three 31st Bomb Sq (H) planes led by Captain Carroll. Results were negative. Several Navy planes also searched and results were also negative.
On 12 June 1943 two 31st Bomb Sq (H) planes led by Captain Roberts conducted a search and again the results were negative.
Inasmuch as this missing crew apparently went down over or close to the target area, search was very difficult.

The Knoxville News-Sentinel, May 1, 1942
Corpl. J.H. Swanner, stationed with the Army Air Corps in Hawaii is “well and happy,” acording to a letter received this week by his mother, Mrs. J.F. Swanner, Nubbin Ridge Road. Corp. Swanner has been in Hawaii one year. He attended the Hawaiian Technical School where he studied airplane mechanics. He was made a corporal Feb. 1, Mrs. Swanner said, and added “He came through the Dec. 7 attack without a scratch.”

The Knoxville News-Sentinel, June 15, 1943
Tech. Sgt. J. Harold Swanner, 33, Flying Fortress engineer who came through the Jap blasting of Hickam Field at Pearl Harbo unscratched, is missing in the South Pacific. The War Departent message to the widowed mother, Mrs. J.F. Swanner, of Nubbins Ridge Road, says her son has been missing since last Thursday. Sgt. Swanner was with the famous Hawaii – based Fortress units that helped smash the Japs at Midway and then went south where he participated in softening-up operations in the Solomons. “Harold had been in New Zealand recuerating from malaria and only recently returned to active duty,” Mrs. Swanner said today. “He had written that he expected to be home ‘eating fired chicken’ on the Fourth of July. We also had a letter from a mother who had had him to her home in New Zealand. She told us how they had enjoyed having Harold as a guest and said she supposed he was at home by now.”
Sgt. Swanner enlisted in Fabruary, 1941, for Pacific service and was sent to Hawaii within a few weeks. His mother last saw him when she went to the South Carolina base before he sailed. 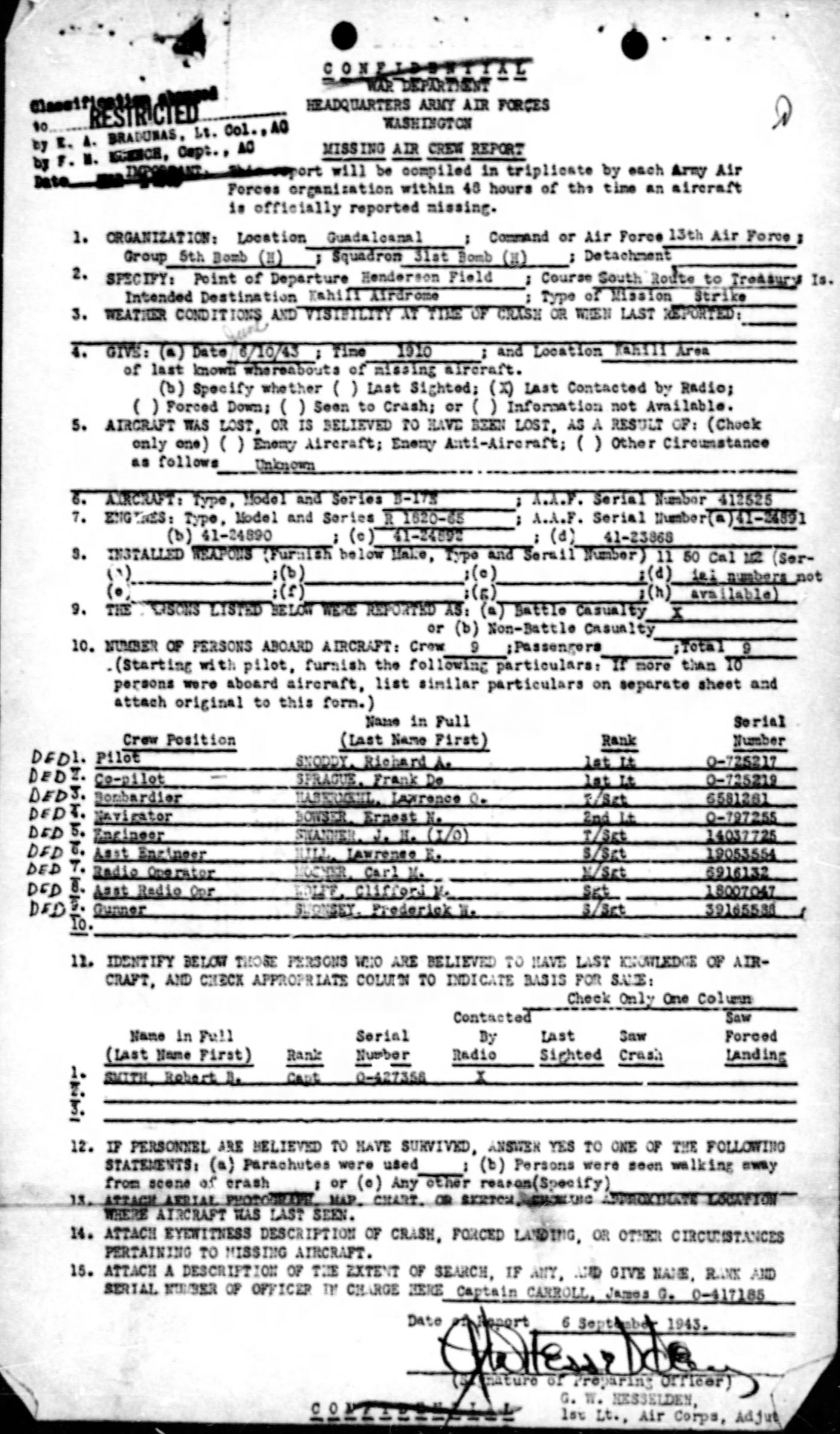 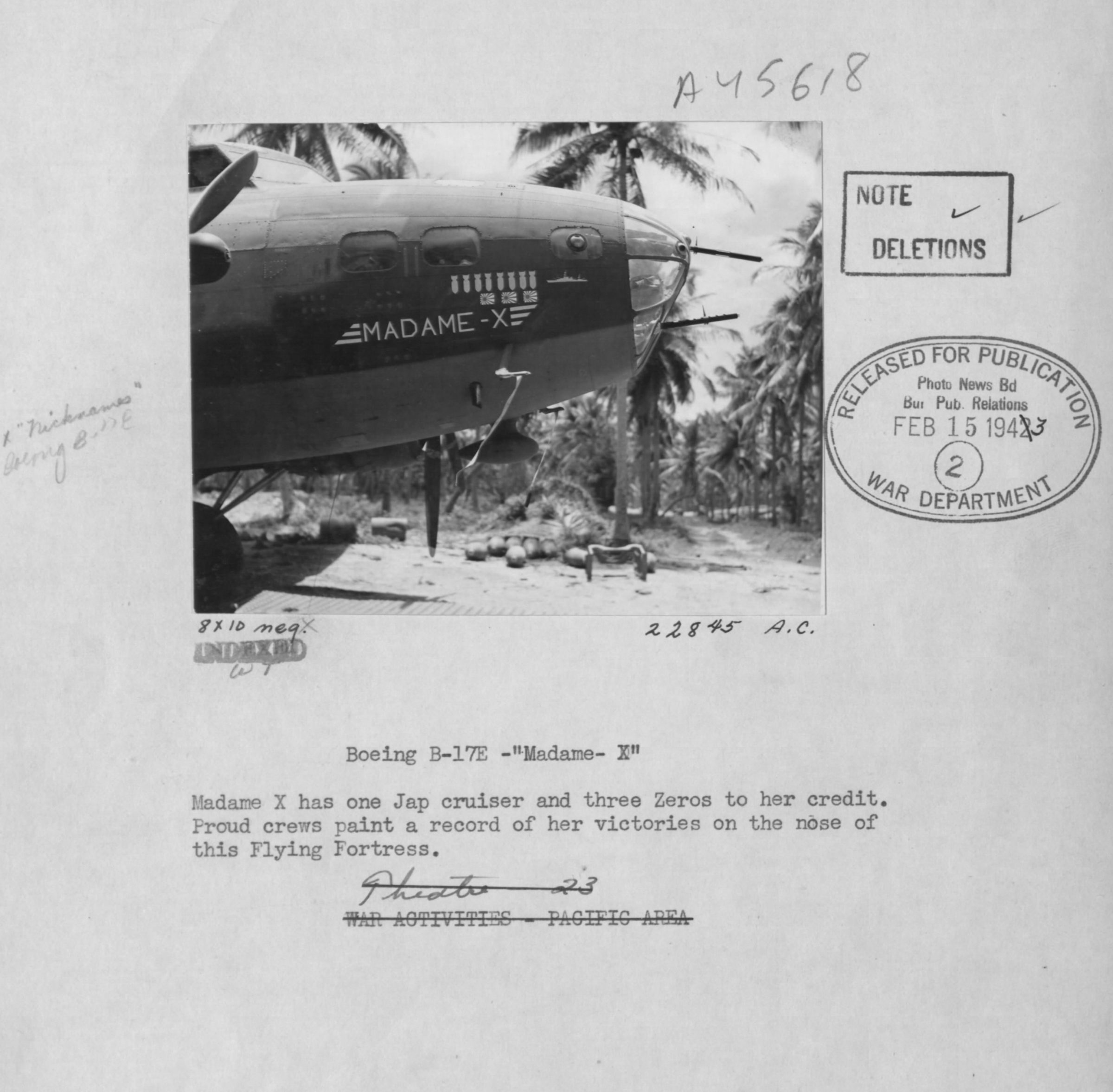 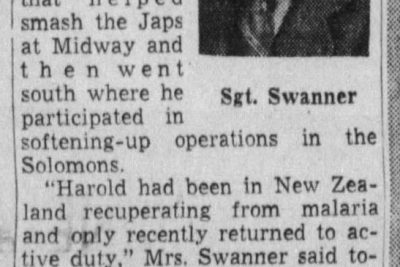 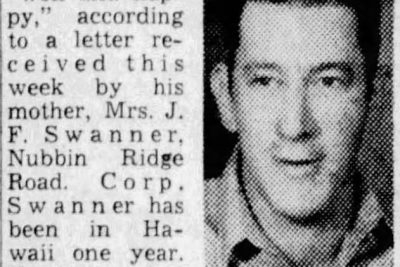