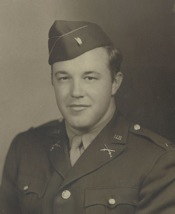 Captain Isham Cason Hewgley was a member of the 17th Infantry Regiment, 7th Infantry Division. He was Killed in Action while fighting the enemy in North Korea on December 9, 1951.

I.C. Hewgley, Jr., was an active member and steward of First Methodist Church in Knoxville since he was 12 years old and became a member of the church’s official board.

His law practice was interrupted by World War II and he was ordered to active duty service on June 10, 1942. During World War II, he served as an infantry platoon leader and Company Commander with the 5th Army in the Italian campaign. In April 1944, he was fighting in the battle for Italy and for his service in and around Casino he was awarded the Bronze Star. His Bronze Star would reach him while he was in Korea several years later. At the close of World War II, First Lieutenant Hewgley was placed in the Judge Advocate General’s office in Milan, Italy and promoted to the rank of Captain.

In 1947, Captain I.C. Hewgley, Jr., returned home from the war and entered the law firm of his father. He became active in Knoxville politics and in 1948 was the Democratic nominee for county solicitor. He later sought the Democratic nomination for Knox County Direct Representative for the Tennessee State legislature. He had served as Sergeant of Arms in the Tennessee State Senate during the 1949 legislative session.

Upon his separation from the Army after World War II, Captain Hewgley helped organize the reserve unit of the 822nd Tank Battalion in 1949. In October 1950, he was called up from reserve status and sent for further training to Camp Polk, La. and in July 1951, Captain Hewgley was sent to Korea. He was immediately sent to the front where he remained almost continuously until he was killed in action in North Korea. Captain Hewgley was serving with the Seventeenth Regimental Tank Company, Seventh Infantry Division. He was killed in action on December 9, 1951 near Sat’ar-ri, North Korea while leading his tank company in an attack on the enemy.

The notice of Captain Hewgley’s death reached his parents in Knoxville just days before Christmas on December 22, 1951. His remains were returned to the United States on the transport Enid Victory which docked at San Francisco on February 20, 1952. Funeral services were held in Knoxville and he was laid to rest in Highland Memorial Cemetery.

In addition to his parents Mr. and Mrs. Isham Cason Hewgley, Sr., he was survived by his brother, Robert Hewgley, a student at the University of Tennessee Medical School in Memphis. I.C. was engaged to Miss Beverly Taylor of Houston, Texas.

Captain Hewgley was well known, respected, and has been memorialized in the Knoxville community. The US Army Reserve Training Center in Knoxville was named in honor of Captain Isham C. Hewgley, Jr. on November 12, 1957. He had helped organize the training center after his service in World War II. 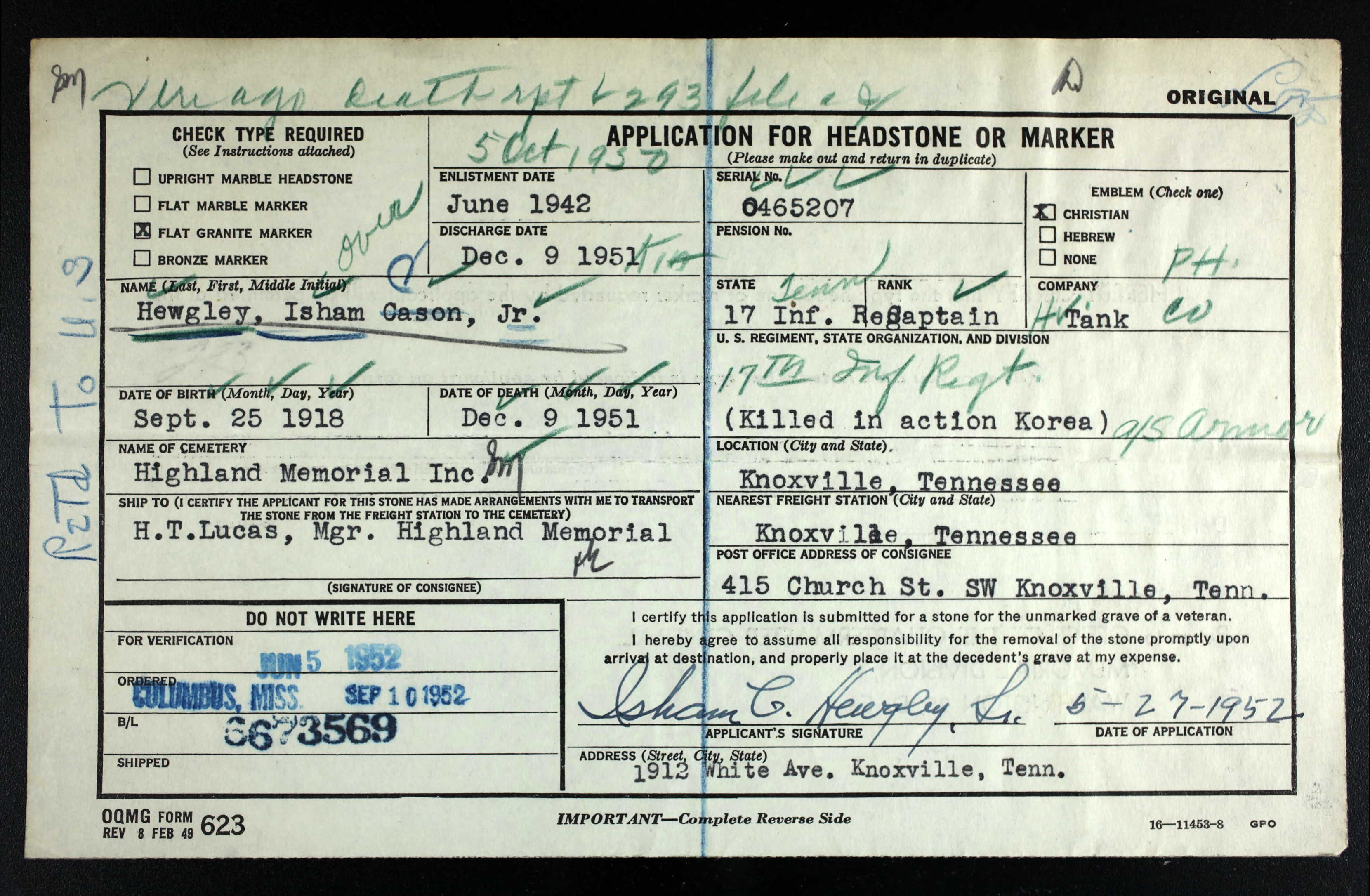 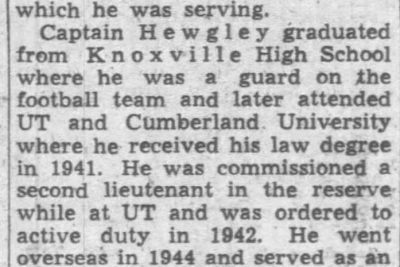