The Knoxville Journal, March 13, 1944
Lt. Hugh J. Jones Jr., 24, has been missing in action since Jan. 30, the War Department notified his father, Hugh Jones, 2702 East Fifth Avenue, yesterday. Lieutenant Jones was a member of the First Ranger battalion which was almost extirpated in a resent assault on a German stronghold in Italy, according to his uncle, Ed Tate. He attended Knoxville High School, teh Tennessee Military Institute and the University of Tennessee before enlisting in service in September, 1940. He went overseas sometimes in 1943 and was wounded just after the first assault on the Italian front, Tate said. 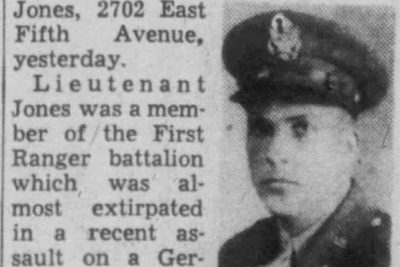