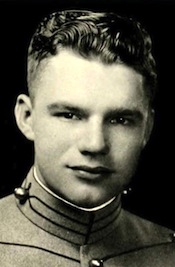 The Chattanooga Daily Times, 27 March 1945
Lt-Col Hugh A. Griffith Jr., U.S. Army Ari Corps fighter group commander based in Italy with the 15th AAF, son of Mr. and Mrs. Hugh A. Griffith of SOuth Pittsburg, Tenn., has been awarded the Distinguished Flying Cross for “extraordinary achievement” as pilot of a P-38 over enemy territory. Col. Griffith’s award was for repeated successful attacks on German locomotives and transport on Dec. 28, 1944 while returning with his squadron after escorting heavy bombers against vital enemy installations in Germany. “While on the homeward cours,” the citation reads, “after successfully completing the assigned escort mission, he sighted several trains * * * in Austria. Unhesitatingly he led his squadron down to strafe the enemy transport. The first attack was made on locomotives and attached freight cars. Both locomotives and several freight cars were destroyed. While making a turn to avoid enemy flak, Col. Griffith observed two more enemy trains. He immediately attacked and destroyed both locomotives. Climbing to higher altitude, two more moving trains were seen, and he led the attack on these. Both locomotives were seen to explode. Col. Griffith personally destroyed six locomotives, and under his leadership a Total of 11 enemy locomotives and several freight cars were destroyed and grave damage was inflicted on several others. “By his superior leadership, skill and intense devotion to duty, as evidenced throughout his combat career, Col. Griffith has reflected great credit upon himself and the armed forces of the United States of Ameria.” Star and Stripes, overseas service newspaper, links Col. Griffith’s name with that of Lt.-Col. Charles D. Chitty Jr. of Albany, Ga., as ace “locomotive-busters” in the Italian area. It said, in part: “His (Col. Chitty’s)  nearest rival  is Lt.-Col. Hugh A. Griffith Jr., South Pittsburg, Tenn. Col. Griffith commands the 48th Fighter Squadron * * *  and has bagged 20 locomotives since the middle of October, including six in one day. His favorite target is locomotives, but he is also partial to oil cars.”
Col. Griffith was featured Sunday afternoon on the Army Hour program of the NBC network. His graphic description of his experiences as a “locomotive-buster” were heard by his parents at South Pittsburg and other relatives in Marion County. He is a graduate of Tennessee Military Institute, Sweetwater, Tenn., and of West Point, class of 1939. He was promoted to his present rank May 26, 1944. His wife, the former Miss Elizabeth Harris, and their two children, Hugh Albert Griffith III 5, and Kayla, 3, reside in Columbus, Ga.

The Chattanooga Times, 30 July 1950
South Pittsburg, Tenn., July 28 – Mr. and Mrs. Hugh A. Griffith today received a telegram from the War Department stating their son, Lt.-Col. Hugh A. Griffith Jr., had died in Japan of gunshot wounds in the head. The wound presumably was received on a flying mission in Korea. Lt.-Col. Griffith was 32 years of age. He was born and reared here and was graduated from South Pittsburgh High School and West Point. After the end of World War II he received special instruction at the Massachusetts Institute of Technology in mathematics, in which he was a brilliant student. He had been stationed until recently in Manila. Upon receipt of the death notice, Griffith telephoned the widow, who, with three children, is residing near Clark Field, Manila. It was the first word she had of the tragedy.  In addition to his parents, he is survived by his wife, the former Miss Elizabeth Harris of Columbus, Ga.; a son, Hugh A. Griffith III, and two daughters, Kayla and Terry. The father of the dead pilot is president of the First National Bank of South Pittsburg and a director of Hamilton Associates.

The Chattanooga Daily Times, 19 August 1950
South Pittsburg, Tenn., Aug.  – The body of Lt.-Col. Hugh A. Griffith Jr., who died in Japan about three weeks ago, will arrive in Bridgeport Ala., the family as been informed. The body will be escorted by Lt.-Col. Leslie B. Loken. 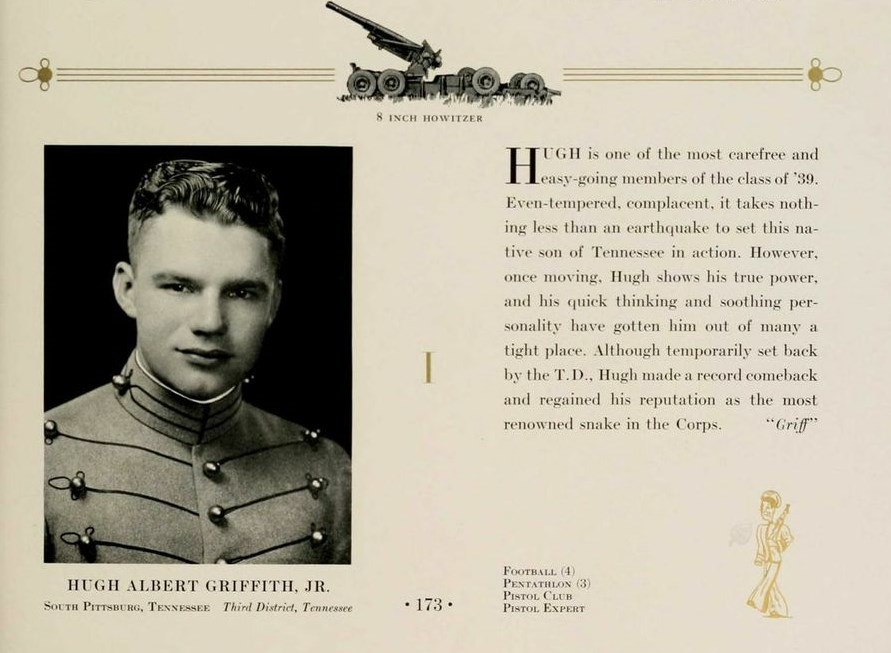 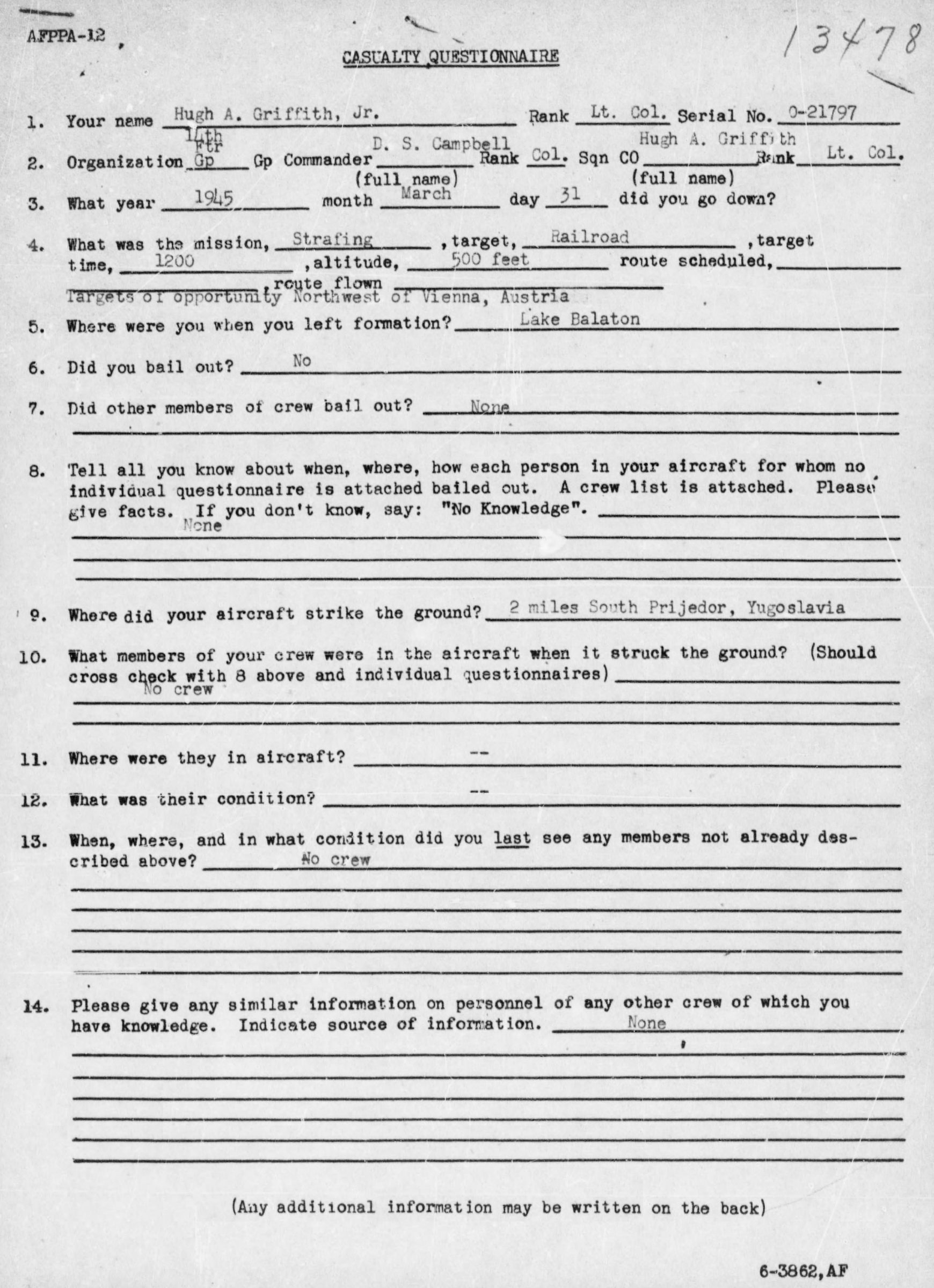 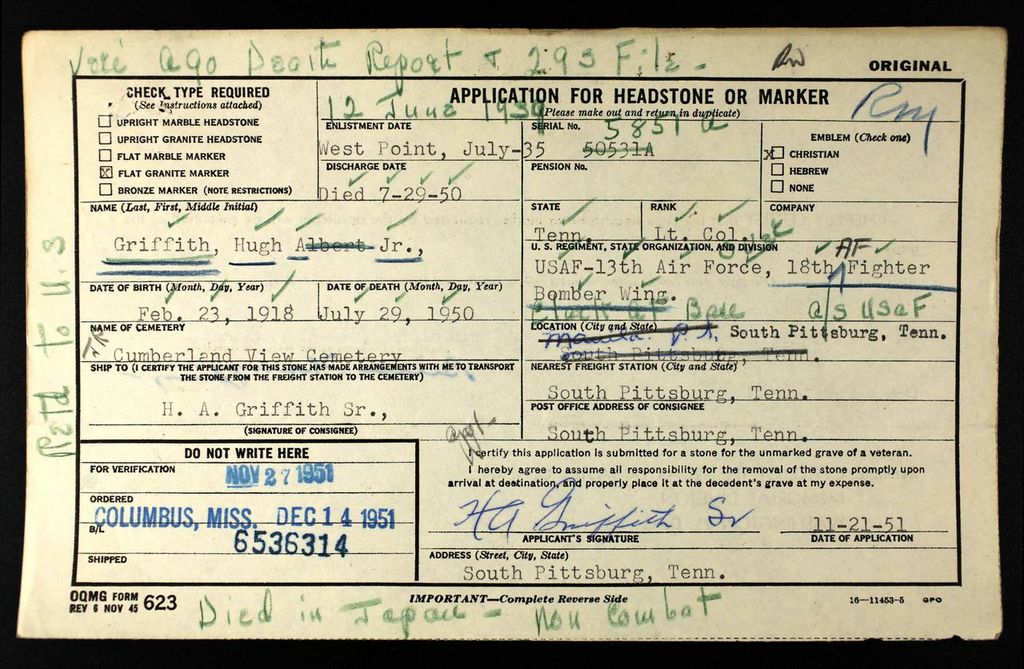 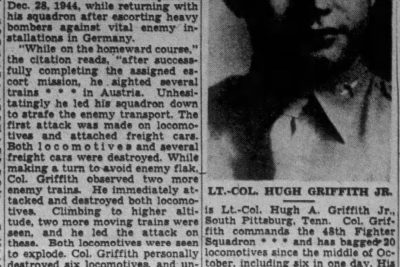 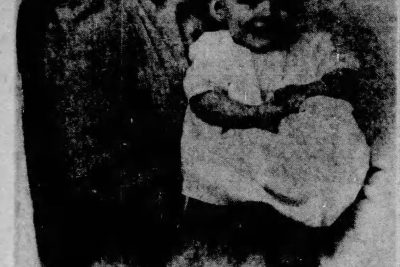 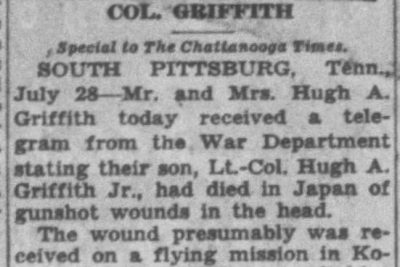 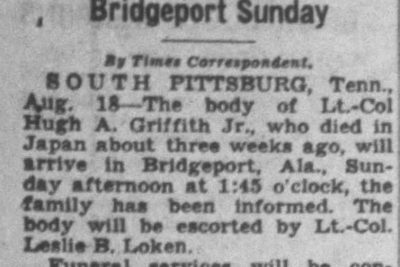