Madisonville boy killed in action
Many hearts were saddened on Wednesday of last week when news was received from the War Department by Mr. and Mrs. Hubert Crowder that their son, Wade, was killed in action on May 23 during a battle on Okinawa. Wade was 20 years of age. He entered the service in September, 1944, going overseas in February. He received his basic training at Camp Blanding Fl. He was a graduate of Madisonville High School and was employed by TVA before entering the Army. Besides his parents he is survived by four brothers and two sisters. Cpl. Ray Crowder, U.S. Army Glenn, Claude and J.W. Mrs. Marie Muller of Maryville and Miss Bulia Faye. 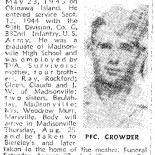