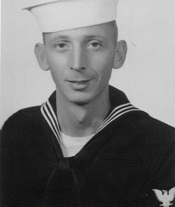 Boatswains Mate 2nd Class Hubert W. Tuck, Jr. was born on September 10, 1937, and was originally from Lenoir City, Tennessee. He was the son of Hubert Tuck, Sr. and Agatha W. Tuck. He served his country in the Vietnam War in the United States Navy, with PCF-9, PCFDIV 101, TF 115, US Naval Forces Vietnam. Prior to his service in Vietnam, he was a six-year veteran of the Navy. On October 18, 1966, BM2 Tuck died from a non-combat misadventure, likely drowning, off the coast of Military Region 4, South Vietnam. He was 29 years old at the time of his death. BM2 Tuck is buried at Hickory Valley Cemetery in Lenoir City, Tennessee, and is memorialized on the Vietnam Veterans Memorial on Panel 11E, Line 89.