Hoyle James Smith was the son of Robert Frank Smith and Nell Hutchins. He was married to Jennie F. Robinson. They had a son, Warren Hoyle Smith. He enlisted on November 11, 1942, in Fort Oglethorpe, GA and served with the 143rd Infantry Regiment, 36th Infantry Division, G Company when killed in action.

After the war, he was repatriated back to the United States and funeral services were held June 12, 1949, at Berry Funeral Home Chapel. He was buried at Ballards Chapel Cemetery in Blount County, TN.

The Knoxville News-Sentinel, October 30, 1948
Pvt. Hoyle J. Smith was killed in action in North Africa on Sept. 23, according to word to his wife, Mrs. Jennie Smith, Route 10. Surviving are the widow; the small son, the parents, Mr. and Mrs. Frank Smith; and four sister, Misses Casetta, Iona, Frankie and Ruth Smith. Pvt Smith was a member of the Moreland Heights Baptist Church. 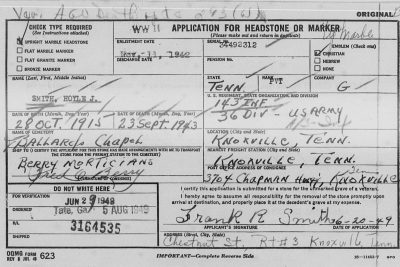 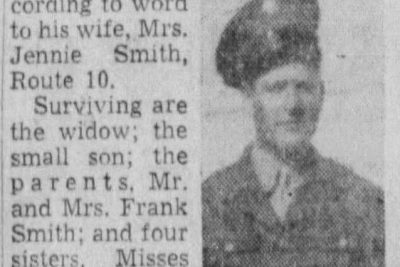