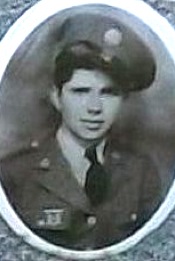 Howard Patterson Sullivan was born on March 21, 1920. He was raised by his grandparents, Frank and Betty Miller. Besides his grandparents, he lived with uncles, Theo Miller, Earl Miller, and Jack Miller; aunts, Margaret Miller, Nell Miller, and Thelma Miller; his younger cousins, William Engel Miller and Herbert Miller; and his only sister, Lois Sullivan. Prior to joining the military, he married and had one daughter, Ina Sullivan Roberts.

He enlisted in the military on October 20, 1941 in Fort Oglethorpe, Georgia. He went overseas for service in the European Theater of the war in January of 1944. He served in the 30th Infantry, 3rd Division. He was killed in action fighting in the Battle of Anzio Beachhead in Italy on May 23, 1944.

His remains were returned to Maryville, Tennessee on November 25, 1948 and he was buried in Tuckaleechee United Methodist Church Cemetery in Blount County, Tennessee.