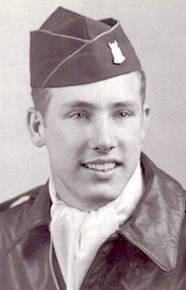 Aircraft B-24J, Serial number 42-95592, Nicknamed Black Cat, departed from Attlebridge, England on 21 April 1945 on a bombing mission to Salzburg, Austria. The aircraft was lost over Regensburg, Germany. Of the twelve crewmembers only two survived.

Statement from 2nd Lt Christ D. Manners:
“Our plane was hit by flak over Regenburg, Germany on April 21st 1945.
Within 10 seconds the plane was on fire and starting into a spin. The left wing was torn off by the shell. All interphone communications failed, and I was unable to determine the disposition of my fellow crew members.
Due to the fact, that I was seated on the floor with my legs extended into the nose wheel well, I was able to drag myself out. After escaping from the ship, I dropped several thousand feet in a free fall. I opened my chute at 10,000 feet. I saw the wings and rudders of the ship floating down to earth. I saw the wreckage burning on the ground about 3 miles from my position.
I saw one chute besides mine; that was the chute of S/Sgt Albert Saradaryan, my tail gunner. No other chutes were seen.
Sgt Saradaryan and I were taken prisoners immediately after reaching the ground. It is my belief that all other crew members were killed in the crash. Sgt Saradaryan was caught in the spin and remained motionless in the ship. Only when the fuselage broke behind the camera hatch was he able to fall out.
He told me, that he had seen Sergeant Brennen and Sergeant Peterson, the waist gunners, making a futile attempt to reach the rear hatch exit.
At the time of the above incident, Captain Wieser was in the co-pilot seat, which in my estimation, made his chances for escape almost impossible. The above statement contains the facts of the incident as I saw and lived them.”

Howard Goodner plunged out of the Black Cat, the last American bomber shot down over Germany in World War II, early on the morning of April 21, 1945. The B-24 Liberator was hit at 22,000 feet and broke into pieces.

Goodner, just 21, had no parachute. He came down in a free fall alongside bombs and oxygen tanks, spinning toward the Bavarian village of Scharmassing.

He landed in a field outside town, his body striking the earth so hard that it left a crater nearly six inches deep.

Maria Wittig, then 19, saw him there. He was athletic looking, fair-skinned, handsome. Long fingers.

“I can see him before me,” she told an interviewer, a half century later, so clear was her memory. Shown a picture of the entire crew, she picked out Goodner immediately. “That’s him,” she said, her voice breaking.

The story of Goodner, the Black Cat and Maria Wittig is 60 years old. Other wars have come and gone, but the story has never really died, living on in the small shadows of the greatest generation.

Yesterday at a ceremony in Vienna, the Black Cat was immortalized on a U.S. postage stamp, that diminutive marker of historical American moments large and small.

Part of a series of 10 commemorative aviation stamps, this one shows the Black Cat still intact, still in flight, over the pastoral fields where it would crash. Nothing on the stamp denotes the plane’s tragic end.

Today, when more than 60 million of the stamps go on sale at post offices across the nation, customers might assume the aircraft pictured on it is a generic model of a plane that has long since faded from use.

Only a few know its story of heartbreak, and how it has continued to reverberate in the lives of a few for so long.

Two of the 12 crewmen on board survived. The other 10 died upon impact, none having lived to be 30.

Their families were informed of their loss on May 8, V-E Day, when the rest of the nation rejoiced.

“The plane being shot down at the very end of the war — it has haunted my family for so many years, and I finally went to Germany and found the crash site,” says Thomas Childers, Goodner’s nephew, whose 1995 book, “Wings of Morning,” chronicled the story of the plane and its crew. “This farmer started scratching around in the dirt, and he pulled out a 50-caliber machine gun bullet. I was speechless. Every year when they plow, parts of the plane come to the surface.”

“My family just never got over it,” says Robert Layton in a telephone interview from Indianapolis yesterday. He is the cousin of the doomed plane’s pilot, Richard “Dickie” Farrington.

“There’s still a lot of resentment against the Axis side. I won’t drive a German or Japanese car to this day. My aunt, Richard’s mother, never could move out of her house until the day she died a few years ago.

“She wasn’t mental, but she just couldn’t get it out of her head that Dickie might have been in an institution all these years. She thought he’d come home and she would have moved. He’d never be able to find us.”

If not for Childers’s curiosity, the Black Cat’s history would have almost certainly been lost. After his grandmother died in the small town of Cleveland, Tenn., in 1991, Childers went to clear out her house before it was sold.

He found a musty case of letters — more than 300 — that Howard Goodner, her son, had sent during the war. Childers was a historian of German culture and politics by then, and to find such a cache of original documents from World War II was striking.

He put down his academic research and took up the story of his uncle’s flight crew. Among them, John Murphy, Jack Perella, Al Seraydarian, Goodner, Farrington — they were young men from Brooklyn, Peoria, Pittsburgh, St. Louis, a cross-section of mid-century America.

In his research, he discovered that the Black Cat was the last bomber shot down over Germany before peace was declared, lending the story its tragic footnote. When he discovered that the crew wasn’t originally scheduled to fly that day — and that bad weather should have forced them to cancel before takeoff — it only added to the pathos.

He wound up in Bavaria, where he met Wittig. He did not tell her that Goodner was his uncle, only that he was researching the history of the plane. When she tapped Goodner’s picture, as the airman who came to earth in the field, he felt a tingle on the back of his neck.

The book’s 1995 publication brought some critical acclaim but not much in the way of sales. It may have reached its most widespread moment in pop culture in 2002, when best-selling historian Stephen Ambrose was found to have plagiarized a passage from the book in “The Wild Blue,” his history of B-24 bomber crews.

But the surviving members of the 466th Bomb Group, of which the Black Cat was a part, began petitioning the U.S. Postal Service to memorialize the Black Cat on a stamp. It was a long shot.

“We get 50,000 people a year who say, ‘I’ve got the best idea ever for a stamp,’ ” says David Failor, executive director of stamp services for the U.S. Postal Service. “We actually release about 25 or 30 subjects for commemorative stamps each year. You can figure the math.”

The ceremony yesterday marked the official release of the stamp’s one-year run. Looking at the plane on the stamp — the sunlight warm on its silver wings, a river glinting in the green fields below — lends a bittersweet irony to one of Goodner’s last letters home.

He was on a three-day break at a resort in Mundesley, on the British shore. There were dining rooms — not chow lines — soft beds, hot water, a golf course. He walked on the beach, played darts at a local pub. He loved it.

“Just hoping the war ends soon,” he wrote to his family, “and we can all get home again.”

Howard Goodner had 13 days to live.

Picture below:  Sixty years after the Black Cat bomber was downed over Germany, the B-24 Liberator is commemorated on a postage stamp. Ten of the crew died in the crash just before the end of the war in Europe, including Howard Goodner, kneeling second from right; and pilot Richard Farrington, standing third from right. (Above: Courtesy U.S. Postal Service; Below Left: By Jonathan Newton — The Washington Post)  See attached weblink: http://www.washingtonpost.com/wp-dyn/content/article/2005/07/29/AR2005072901936.html

Goodner was the uncle of Prof. Thomas Childers (http://www.history.upenn.edu/people/faculty/thomas-childers), who wrote about the loss of Goodner and his B-24, the “Black Cat,” in the book “Wings of Morning.” The Black Cat was the last U.S. bomber shot down in Europe. See:http://en.wikipedia.org/wiki/Black_Cat_(aircraft)

In picture below Goodner is kneeling, second from the right.

And, a reproduction of the US postage stamp depicting the “Black Cat”: http://www.rockitroost.com/US-Postal-Service-B24-Liberator-Stamp-Metal-Sign-p/usps006.htm 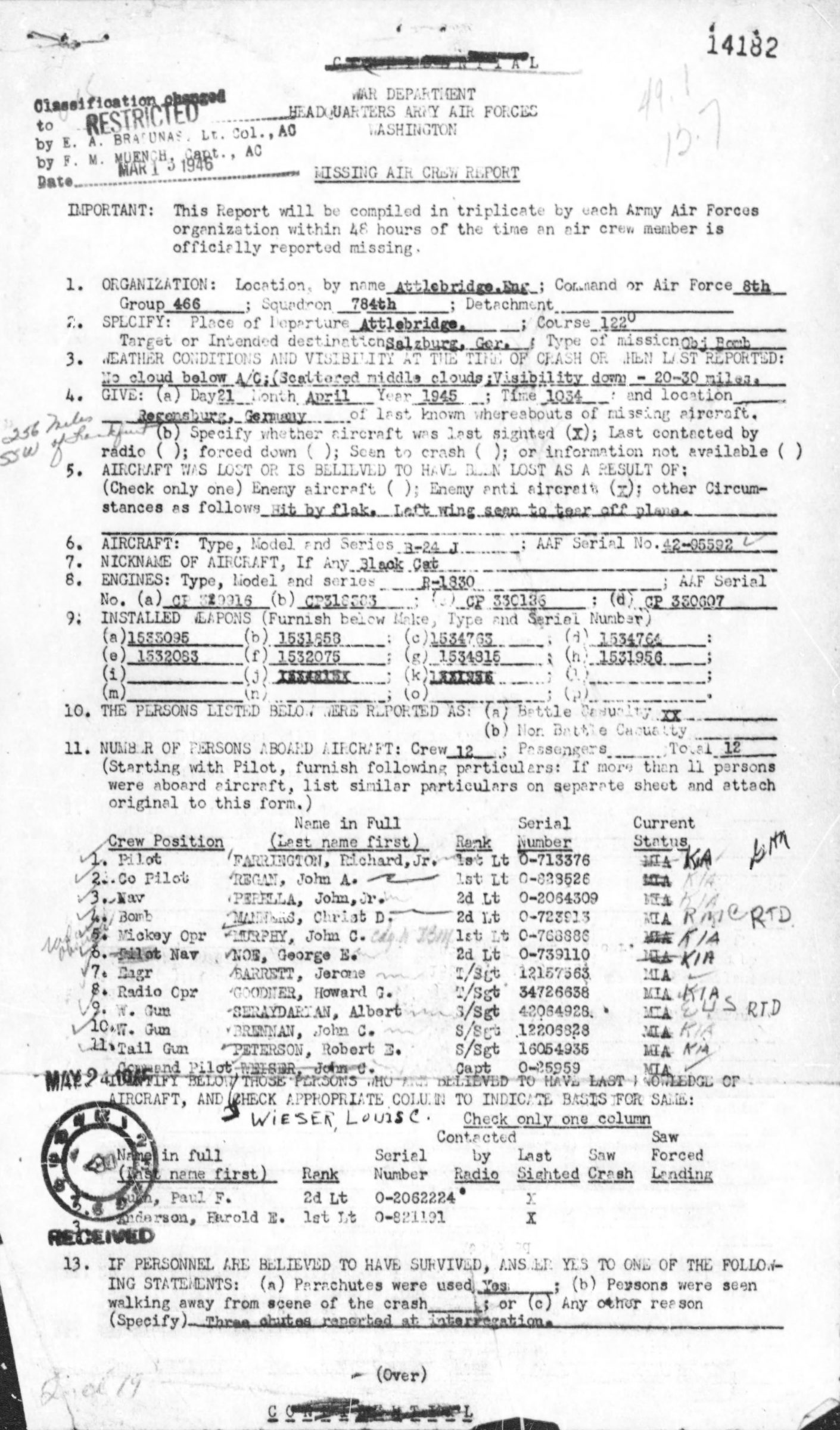 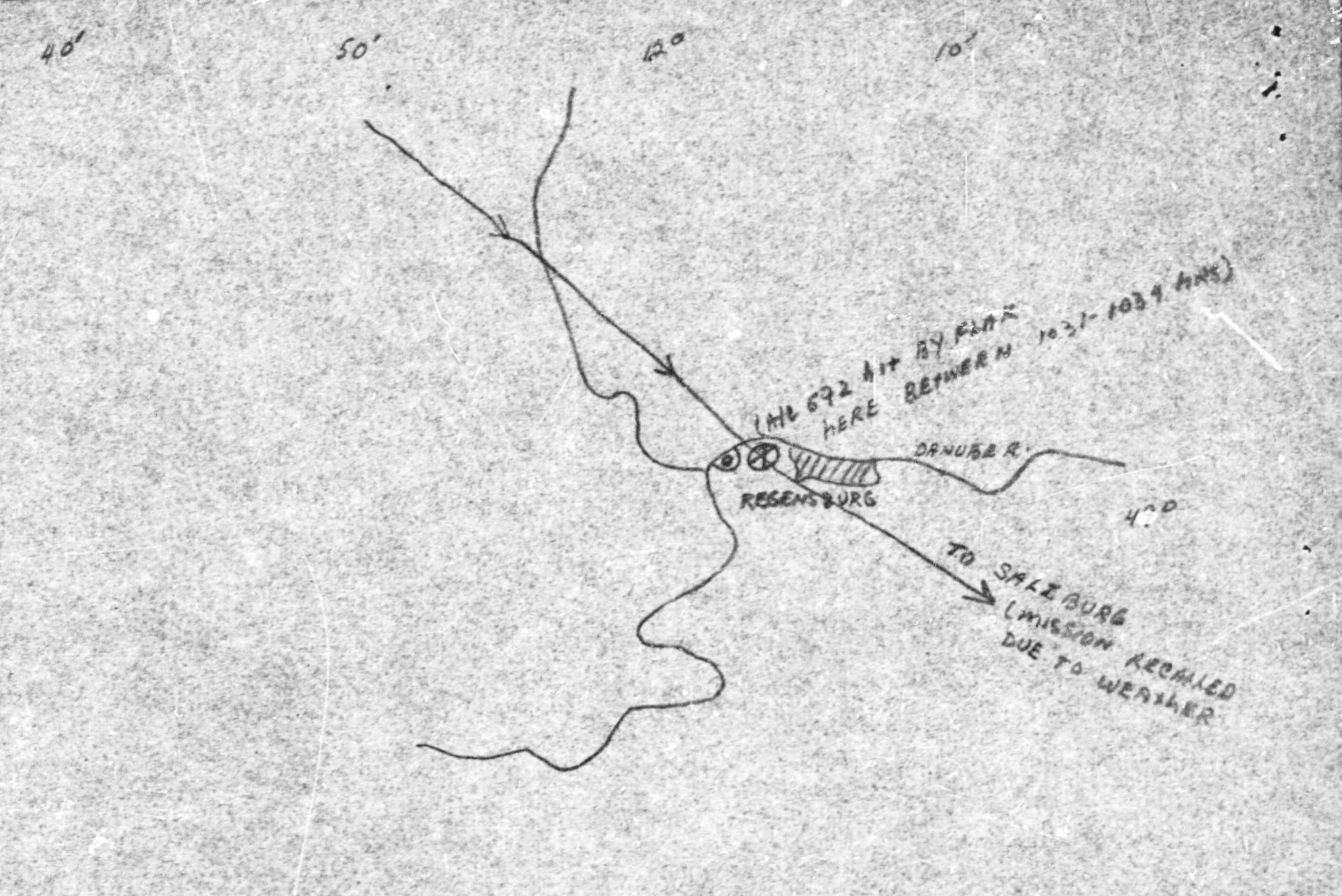 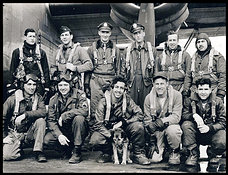 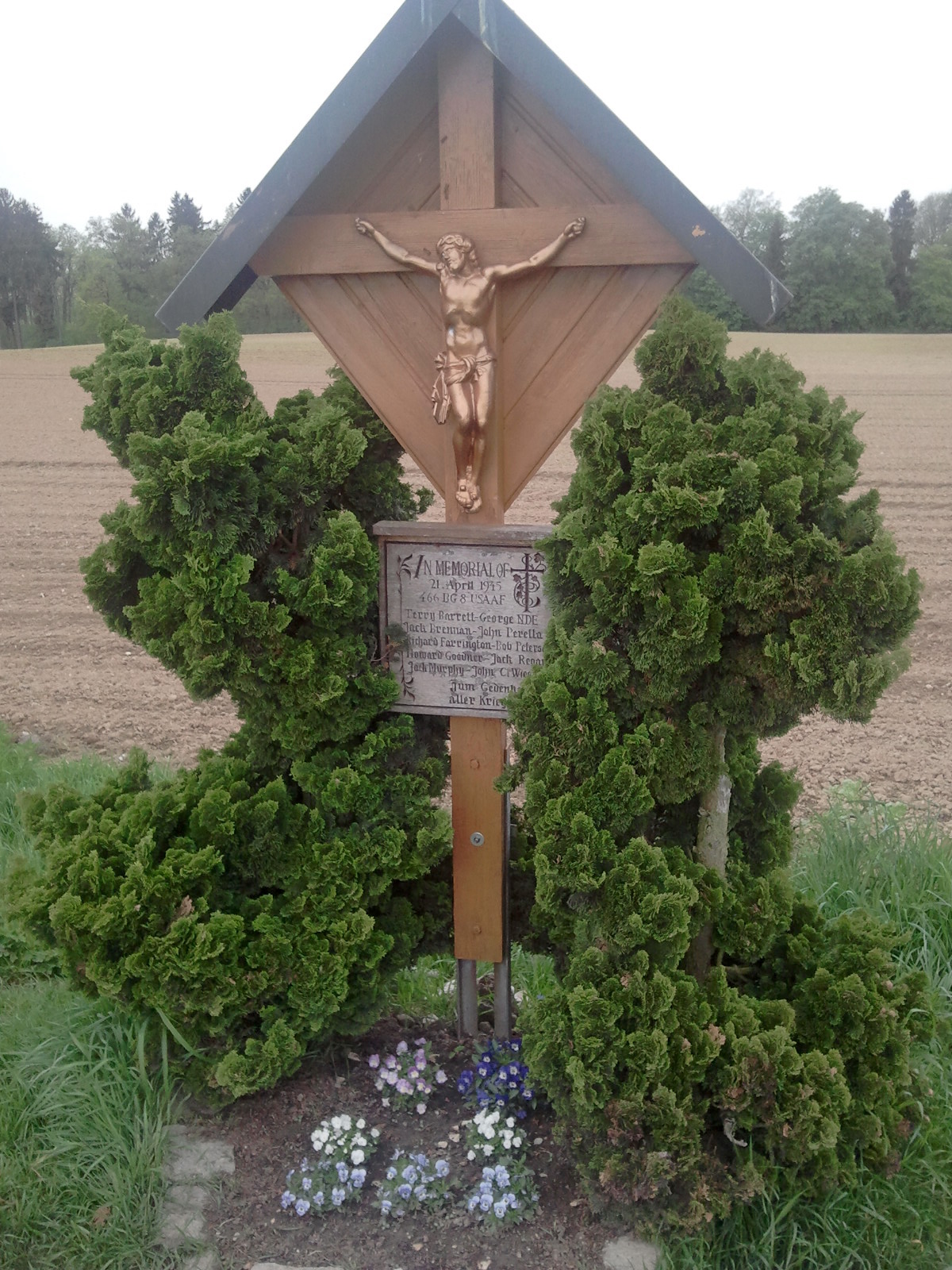 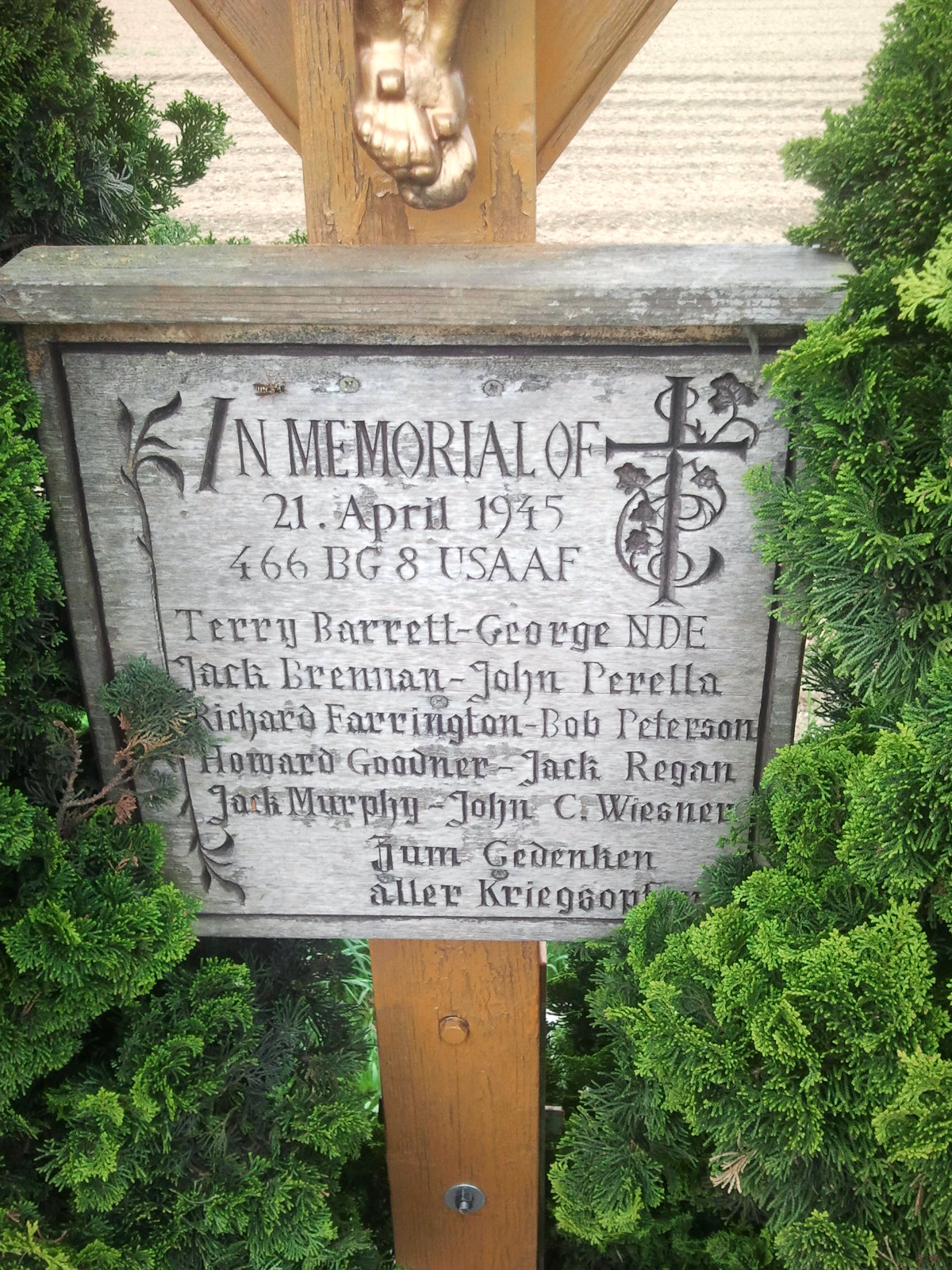