Second Lieutenant Hobert Harris was born on June 18, 1898 in Flag Pond, Tennessee. He was the son of W. Franklin Harris and Mahala Crain Harris Cody. He was the stepson of Noah Cody. He served in the 127th Infantry. He was killed in action on October 14, 1918. He was initially buried in Cemetery #876, but his remains were returned to the States, and he is now buried in Flag Pond School Cemetery.

He was returned home by Special Train under Special Order #64 with Military Escort along with other East Tennesseans from Hoboken, New Jersey to Washington, DC and then to Erwin, Tennessee. 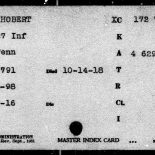 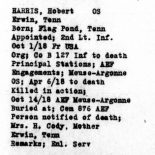