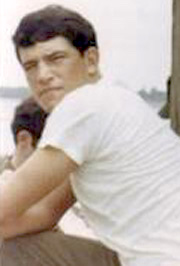 Stephen Mayo Hiscock died as a result of hostile action in an air crash on land in Laos, Thua Thien province. He was a 1968 graduate of Bearden High School where he was known as Skipper.

From the Knoxville New Sentinel, May 20, 2018: I went to Vietnam War memorial to honor Skip

I also insisted on seeing the Vietnam Veterans Memorial. I had never been, and I had a special reason to go.

Years ago when I attended West Hills Elementary School, I had a secret crush on a good-looking, dark-haired boy in the eighth grade named Skipper Hiscock. Everyone liked him, even the teachers.

He was smart, and he was nice to everyone (unlike some other classmates I remember). His life was full of promise, and he seemed destined for success. I was a shy, awkward seventh-grader who admired him from a distance.

Skip went on to attend Bearden High School, and I went to West High School. I later went away to college and often wondered what happened to him. One day in 1971 while I was home on break my sophomore year, I picked up a newspaper and read that he had been killed in Vietnam.

I was stunned. It absolutely broke my heart. He was only 20 years old. Although the Vietnam War had been raging for years, Skipper was the first person I actually knew who had been killed in action. It affected me profoundly.

When Ken Burns’ documentary on the Vietnam War aired on PBS last year, it reminded me of Skipper and all the people I knew whose lives were forever changed by the war. I thought of my late husband, Jim, who was an Army lieutenant stationed at Fort Hood, dreading the orders that would put him on a plane bound for Southeast Asia in the middle of the night. I remembered the young man who lost his legs in the war who lived in a house down the street from me when I was in college. His housemates would help him down the steps every morning so he could get to class. I thought of my friend Michael who served in the Navy and who still struggles with post-traumatic stress disorder. I thought of my friend Linda, who lost her father in the war and how different her life might have been if he had lived. It made me angry.

There are many reasons to be angry over our government’s role in Vietnam. We now know that the Gulf of Tonkin incident in which the USS Maddox was allegedly fired upon by North Vietnamese torpedo boats, and that was used to justify the escalation of the war, was completely fabricated. The South Vietnamese regime we supported was corrupt and despised by its own people. Secretary of Defense Robert McNamara had advised President Lyndon Johnson that the war was unwinnable as far back as 1967. In spite of growing unpopularity with the American people, the war dragged on. In late 1964, 225 Americans had died in the Vietnam conflict. By the war’s end in 1975, the death toll had passed 58,000.

My reason for going to the Vietnam Veterans Memorial was to find Skip’s name on the black marble wall and get a tracing. It was my way of honoring him and all the others who needlessly lost their lives in a futile and misguided war. I keep the tracing in a box with other special mementos.

Every Memorial Day, we honor our veterans with flags, parades and patriotic displays. We have cook-outs and invite our neighbors. We thank our men and women in uniform for their service. These gestures may make us feel better, but they pale in comparison to the sacrifices made by our service members.

Perhaps a better way to honor our veterans and military servicemen and women is to elect better leaders. We need thoughtful leaders with moral courage who are not beholden to war profiteers. We should be wary of those who talk tough and make threats, with little concern for the consequences of their actions. Also, as American citizens, we have an obligation to be informed about the issues and vote. We must do what we can to prevent wars from ever taking place. If you feel strongly about an issue, protest, join a march, or write a letter to your elected representatives. Do something!

Finally, we must summon our better angels and forgive those who have inflicted so much pain and suffering. This includes forgiving ourselves. Let the healing begin.

Ann W. Delap is an Auburn University graduate and longtime food service consultant in Knoxville. She notes that there is a website sponsored by the Vietnam Veterans Memorial Fund where one can post comments and leave remembrances for those who lost their lives in the Vietnam War at www.vvmf.org. There is also a YouTube tribute to Stephen M. Hiscock at https://youtube/C14Ul06_9-chttps://www.youtube.com/watch?v=C14Ul06_9-c posted by a former classmate.

From 1966-68, I played on a girl’s basketball and softball leagues where Mrs Hiscock was my coach for both Sports. Her daughter Lori was a teammate. Stephen ‘Skipper’ Hiscock was the son who often referred the games. There was a joke about Skipper that when he walked down the hallways to turn left….the first thing you saw was his feet. He did indeed have huge, long feet.
Skipper was a most handsome guy to look at, watch and occasionally stalk (jk..sort of)
Before the first softball game, Mrs Hiscock had the team to come over for a slumber party. It was the home where Skipper Hiscock lived with his parents and younger sister..Lori!
This family has always held a special place in my heart!. The Hiscock’s moved from Knoxville to Atlanta I believe near to time Skipper was killed in action as the helicopter he piloted was hit and crashed!
RIP Skipper and to his folks and sister who heartbroken, had to figure out a way to live with this incredible loss.
–Submitted by Patty Mitchell 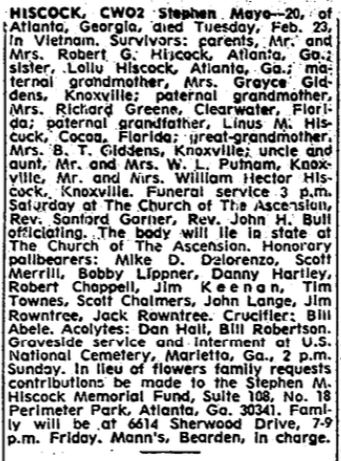 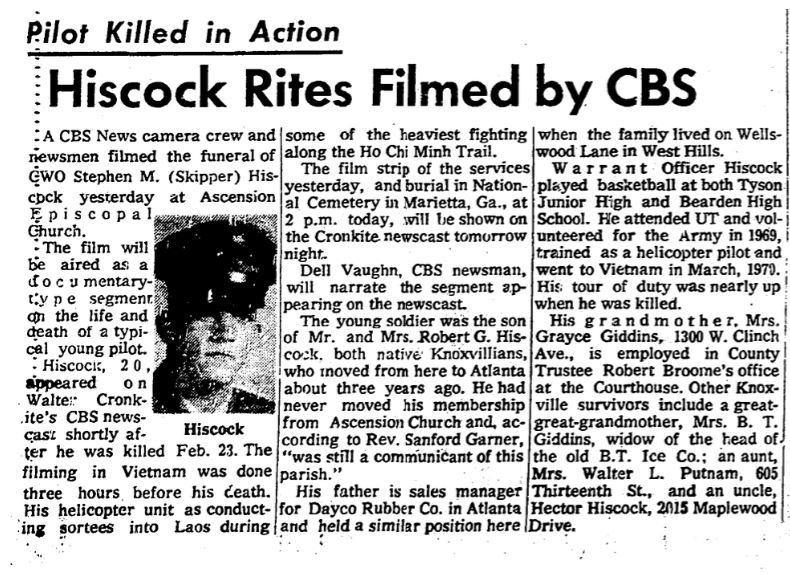