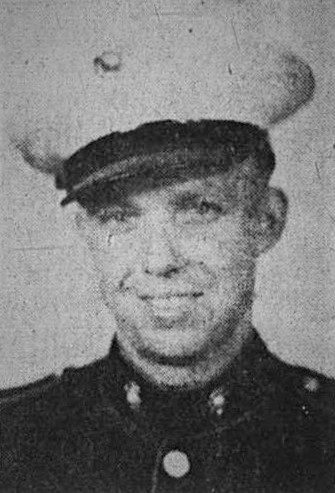 The Daily Post-Athenian, March 17, 1949
Funeral services with full military honors will be held March 20 at the North Athens Baptist Church for Pvt. Hershell Paul McMillan who died in a U.S. Marine hospital at Okinawa, June 3, 1945. The body of Pvt. McMillan will arrive in Athens March 18 from Atlanta, accompanied by a military escort. The body will remain at the home of his wife near Athens until the funeral hour. Pvt. McMillan was one of six sons of Mrs. M.T. McMillan of Athens and the late Mr. McMillan who were in service at the same time during World War II. The elder brother, John McMillan was in defense work and was not in the service. The marine entered the service on July 18, 1944 and left the state Christmas Day, 1944. He was wounded on Okinawa June 1, 1945 and died in a Marine hospital two days later. He wrote that he had been wounded but told the family not to worry because God was with him. He attended the North Athens Baptist Church and it was his intention to join the church upon his return home. He was educated in McMinn County Schools. Surviving besides his wife are two sons, Jimmy and Paul Jr.; mother, Mrs. M.T. McMillan, all of Athens; three sisters, Mrs. Mark Connor, Mrs. C.w. Newman and Miss Lula Belle McMillan of Athens; six brothers, Charles McMillan, army air force in Arabia, Robert McMillan of Oak Ridge, David, John, Floyd and Joe McMillan, all of Athens.
One of his brothers, Joe, is a member of the National Guard here and three living brothers belong to the local V.F.W. 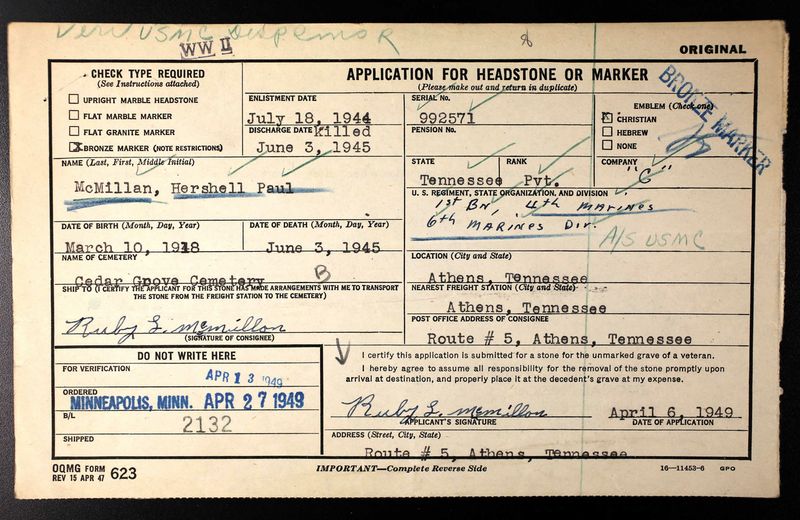 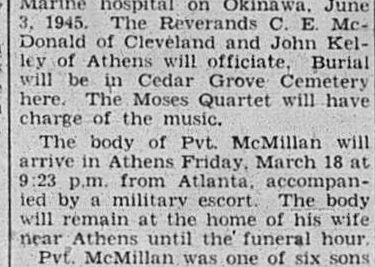