Staff Sergeant Herman R. Bouton was assigned to the 59th Coast Artillery Regiment. He was taken prisoner with the surrender of Allied forces in the Philippines. He, along with 1800 other POW’s, were loaded aboard the Japanese Hell Ship Arisan Maru. On 24 October 1944 the USS Shark torpedoed the Arisan Maru, not knowing it had POW’s aboard, and only nine survived.

He is listed on the Tablets of the Missing at the Manila American Cemetery, Philippines.

He was not married but was one of 5 brothers and 2 sisters (my grandmother was his sister).
–Submitted by his grandniece, Kimberly Daniel 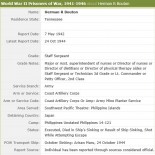