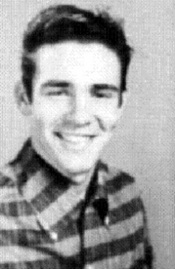 MARSHALL: The Defense Department has announced that a Madison County native was killed in action in Vietnam on April 26th. The victim was killed in combat operations by fragments of exploded booby traps, was listed as 2LT Herman H (Chuck) Payne, 25, of Elizabethton, Tennessee. Payne, a member of Company B, Second Battalion, 9th Infantry Division, had been in Vietnam since December 1966. The son of Mrs Ada Payne of Marshall Route 2, he was a member of Emanuel Baptist Church and Dashiel Masonic Lodge No. 238 in Elizabethton. Payne, in addition to his mother, is survived by the widow, Mrs Carolyn Stanley Hayne, a son, Matthew Scott., and a daughter, Angela Denise Payne, all of the home; a sister, Mrs Mallie Henderson of Marshall; two brothers;, Harry and Barnett Payne, both of Marshall. Payne’s body will be returned to Elizabethton for services and burial under the direction of Hathaway-Percy Funeral Home.

He is buried in the Andrew Johnson National Cemetery, Greeneville, TN.

Second Lieutenant Herman Howard Payne was a casualty of the Vietnam War. As a member of the Army Reserve, 2LT Payne served our country until April 26th, 1967 in Long An, South Vietnam. He was 25 years old and was married. It was reported that Herman died from multiple fragmentation wounds from a mine. His body was recovered. 2LT Payne is on panel 18E, line 096 of the Vietnam Memorial Wall in Washington D.C. He served our country for 8 years.

An insight into some of the conditions that 2LT “Chuck” Payne experienced can be read in the nonfiction book, Mekong First Light, by Joseph W. Calloway, Jr., published by Presidio Press. We all owe a tremendous debt of gratitude to 2LT Payne and the other members of our military who gave so much.
–Submitted by Richard

Chuck was my platoon leader and Never Forgotten. LT Payne, to us, was Chuck Payne. We trained together at Fort Riley, did the boat trip over together and fought together to the end. Chuck was the best. The last time I saw him was the night of April 25, 1967. Rob MacEvoy and I were wounded that night as we moved down what we called the bowling alley to our Battalion outpost at An Nhu Thant. We were med-evaced out from there and before we lifted out, Chuck came over to me and asked if I had any money on me. I had a few bucks. Chuck whipped out his wallet and gave me $20.00. That’s a glimpse of the person Chuck was. He was always a stand-up first class person who cared deeply about his troops. He was killed the next day. I have a few pictures of Chuck, the best being a colored polaroid taken at Fort Riley, but I also have some black and whites when we were on landing craft down on the Mekong River. Having just found this site from MacEvoy, both he and I want to connect up with his son Matt. God Bless Chuck and the sacrifice he, his wife and his family made. He has never, never been forgotten.
–Submitted by Jeffrey Williams, 29 Foxwood Cove Holliston MA 01746, jdw.law@verizon.net.

He was a good friend. Herm and I served together in the 23rd Engineer Battalion Company B 1st platoon in 1965-1966 after which he went to OCS. I talked with him last the night of his graduation. He was my best friend in the 23rd and I cried when I heard he had been killed. I still think of him often even now. I’m sorry that I don’t have any photos of him, only the company picture in the division book.
–Submitted by James Mason,3521 Whitcomb Ave, South Bend, In 46614, jimfmason@sbcglobal.net.

Anyone who knew him. I would like to hear anyone who served with or knew him. Today is the 35th anniversary of his death. Gone but never forgotten. I love you dad, Matt Payne.
–Submitted by Matthew Payne.

I knew Lt Payne. He was a very nice man and soldier.
–Submitted by Joseph Tucci