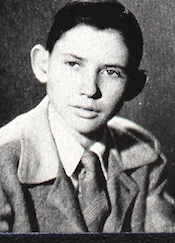 Herbert Kenneth Idol was born June 15, 1929. He was the son of Henry C. and Anna K. Idol. The family home was at 325 Springdale Avenue, where he was raised with his brother, Kenneth, and sisters, Rosa Lee, who died five years before Herbert, and Imogene, the wife of Mr. Edsel Davis who assisted with writing this memorial biography.

Herbert was educated in Knox County schools and attended Oakwood Grammar School, Christenberry School, and graduated from Knoxville High School with the Class of 1947. At the conclusion of his school days, he was an assistant manager of Fleet Oil Company before entering the United States Army. He was a member of Oakwood Methodist Church and regularly attended Sunday school and worship services. Herbert K. Idol was drafted into the Army and was assigned as a radio operator with Company E, 19th Infantry Regiment, 24th Infantry Division. He was promoted to the rank of corporal and had served with his unit for seven months.

Herbert was engaged to Joan Dance of Knoxville and they had planned to be married after Corporal Idol returned from Korea. Their anticipated wedding was tragically cut short when Corporal Herbert Idol was wounded in action by a missile on October 15, 1951, and died the next day on the 16th of October 1951.

Corporal Idol had participated in several fierce battles and had been awarded the Bronze Star medal for his bravery. In October, the 24th division was east of the fallen iron triangle and poised at the city of Kumsong in an area known as the Kumsong Salient. The August 1951 peace talks had been broken off and the 24th was part of a new limited offensive to push north to new objective lines. It was during this offensive to secure Kumsong that Corporal Idol was injured and died as a result of his injuries.

The news of his death reached Idol’s family in Knoxville around the first of December 1951, and the anticipated wedding between him and Joan Dance turned tragically to preparing for his funeral services. Corporal Idol was returned to Knoxville February 8, 1952, over the Southern railway and was taken to Rose Mortuary in North Knoxville, where funeral services were held on Sunday afternoon, February 10, 1952, at 2 p.m. Idol was laid to rest in Lynnhurst Cemetery following his funeral services attended by his fiancee, parents, siblings and other family and friends.

The KNoxville Journal, February 8, 1952
Cpl. Herbert K. Idol and Miss Dance had planned to be married when he returned from combat in Korea. Miss Dance will go on Sunday afternoon with corporal’s family to his funeral service. Corporal Idol was killed in action last October. His body arrives in Knoxville today. It will be taken to Rose Mortuary, where services will be at 2 p.m. Sunday. Interment will be in Lynnhurst Cemetery.
Corporal Idol was a radio operator with the 19th US Infantry Regiment. He was a graduate of Knoxville High School and was assistant manager of Fleet Oil Co. before he enlisted for service. He was a son of Mr. and Mrs. H.C. Idol. Survivors include the parents; a brother, Kenneth Idol; and a sister, Mrs. Edsel Davis. Corporal Idol was engaged to Miss Joan Dance of Knoxville. They had planned to marry when he returned from Korea. Death on the firing line broke the engagement, but his fiance will be with the family to attend the funeral. Miss Dance is the daughter of Mr. and Mrs. Scott Dance, Dempster Avenue. The young man attended Oakwood Grammar School, Christenberry School and later Knoxville High School. He attended church and Sunday School at Oakwood Methodist Church. The picture of the couple was taken after they were engaged. 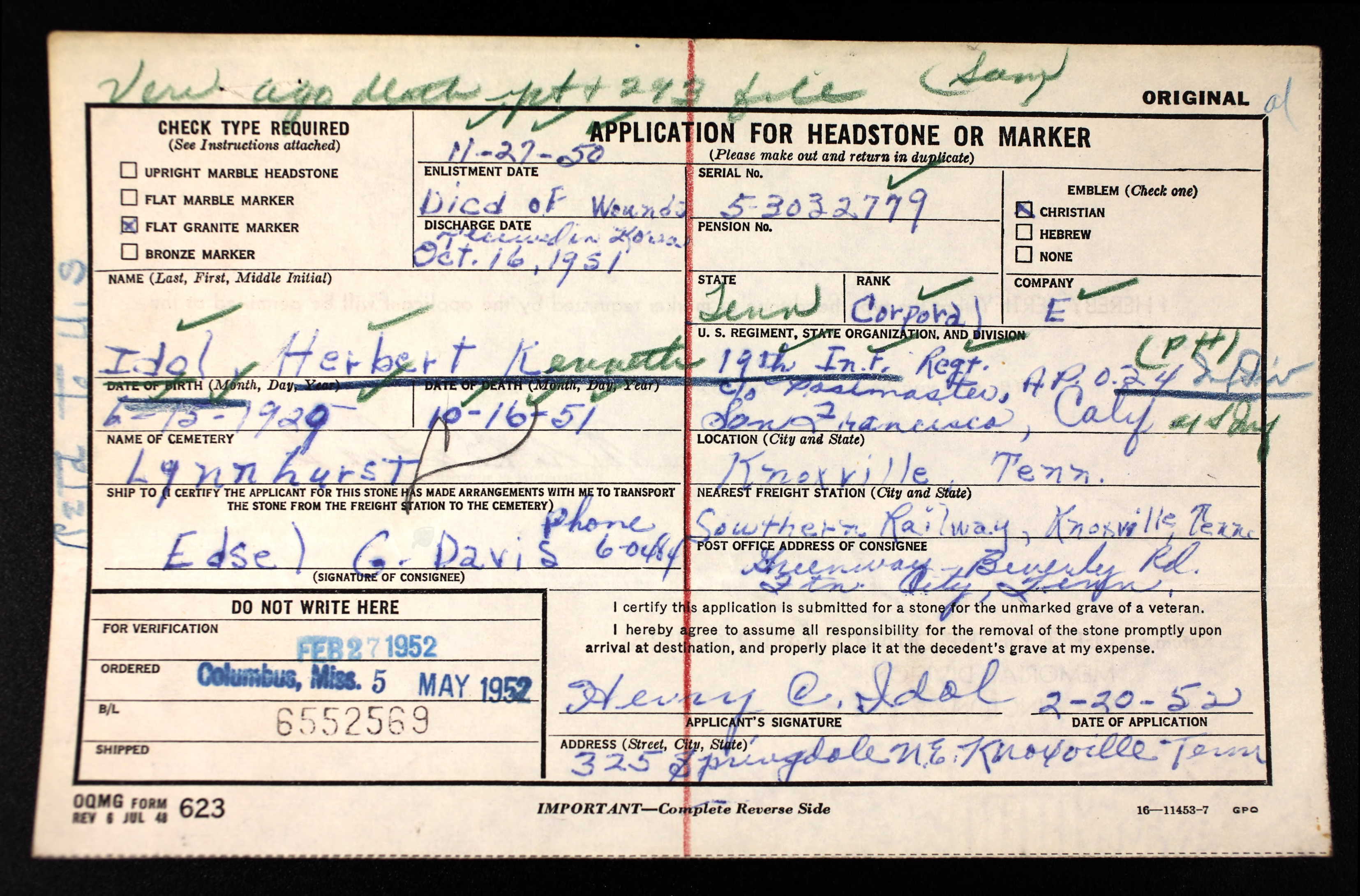 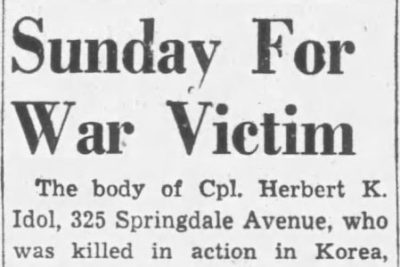 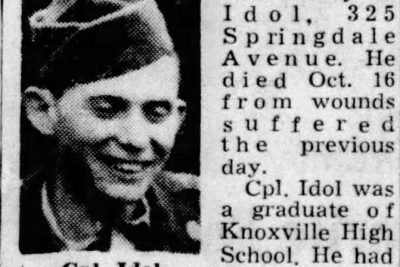 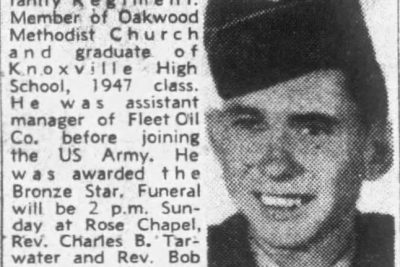