Private Henry Malcolm Rowland was born on July 17, 1906. He was the son of Henry B. and Nancy Seaver Rowland. He had four brothers, John R. Rowland, Charlie Rowland, Kenneth Rowland, and Paul Rowland, and one sister, Hattie E. Rowland. In 1910, he was living with his family in Hawkins County, Tennessee. He later married and worked as a barber in Blount County, Tennessee. He enlisted in the military on April 22, 1942 in Fort Oglethorpe, Georgia. He died on December 30, 1943 at the Station Hospital at Camp Polk, Louisiana. His death is officially listed as Death Non-battle. He is buried in Grandview Cemetery in Maryville, Tennessee. 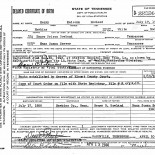