Captain Henry Mitchel Jeffres was born on June 10, 1893. Jeffres, of Lake City, Tennessee, was the son of William R. Jeffres. He lived with his grandfather, William Jeffres. Prior to joining the military, he worked as a farmer. He first enlisted in the military on January 11, 1912 at Columbus Barracks, Ohio. He joined the 20th Infantry. He was honorably discharged on January 10, 1915. During his service in World War I, he served as Captain of Company 8, 4th Motor Mechanical Regiment. He died of broncho pneumonia at Base Hospital 101 in France on October 19, 1918. He was initially buried at the American Cemetery 21, St. Nazaire in France. He is buried in Knoxville National Cemetery (Plot B, Site 3639). 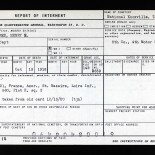 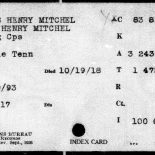 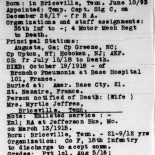