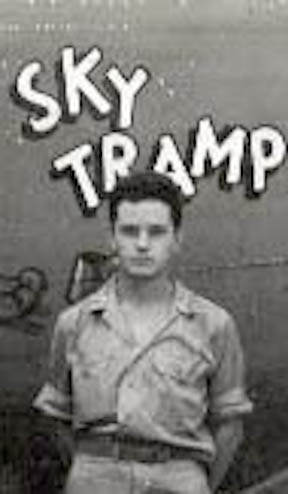 Eyewitness statement of 2nd Lt Robert J. DeSlover:
On 25 August 1944, I was flying number two position with the 394th Bombardment Squarond (H), in airplane #44-40467, on a mission to Palau. Lieutenant Rea was flying in airplane #44-40596 in the last element of the lead squadron, which was about one mile ahead of my position in the last element of the last squadron. On the breakaway after the bomb run, during which the group was being intercepted by eight or ten enemy planes, my nose turret gunner, S/Sgt Parker observed Lt. Rea’s airplane falling in huge chunks of flames. It had apparently exploded from a fire in its bomb bay. A few moments later my Co-Pilot Lt. Tyler called my attention to a wreckage burning on the water, at the southwerstern tip of Koror Town. I observed the wreckage as four fires burning on the water, strung out in a close line. One piece of wreckage was hit on a small marsh, where a parachute was descending into the water amid the wreckage, and one seamarker began to spread after one of the parachutes landed. The landing of the two remaining parachutes was unobserved, though they were close to the wreckage when last seen. The survivors, if any, have landed in enemy waters, within the Palau Group of Islands.

He is memorialized at Manila American Cemetery.

“By Barb O’Brien, with contributions from Rich O’Brien, Joanne Emerick and Norah Pratton

“The 5th Bomb Group (H) Association exists for the benefit of member veterans and their families and friends. Within the Association there are those families of MIAs who still live with the sorrow of not having answers about their loved ones. Members find strength, support and camaraderie through Association reunions, our newsletters and the stories shared by our veterans.

“Recently the 5th Bomb Group (H) Association connected with a group that searches for aircraft and MIAs lost in the Palau area of the western Pacific in WWII. That group is called the BentProp Project, founded 20 years ago by Dr. Pat Scannon. Pat and his experienced volunteer team conduct a search mission to Palau every year.

“A few years ago the BentProp Project helped locate MIAs from a 13th AF 307th Bomb Group crew that had been shot down 1 September 1944. The discovery of that location resulted in the return of remains in 2009 to several families. The story of the search was the subject of the book, Vanished, by Wil S. Hylton.

“Rich O’Brien’s daughter, Alysia, had given him the book, Vanished, for Christmas this year. In March, having just read the book, he knew that one of the planes and crew they were still looking for was the 72nd Sq., 5th Bomb Group B-24J, #44-40596, and the Grant M. Rea crew, which was shot down 25 August 1944 on a mission to Palau. The account of this mission was detailed in the December 2012 “Bomber Baron News”, in the 5th Bomb Group historical records submitted by Joanne Emerick.

“The reports indicated that some of Rea’s crew parachuted out and the others are believed to have gone down with the plane. Two men, pilot Rea and gunner Earl R. Curry, were captured by the Japanese. They died under mysterious circumstances while in Japanese custody.”

See for more information and photo of the plane:
http://www.pacificwrecks.com/units/usaaf/5bg/html/skytramp.html

Blanchard is 3rd from left, top row, in picture below

Henry McKoy Blanchard II was my dad’s first cousin. My great aunt, his mom, was beside herself after his plane was missing. She suffered from depression for a long time.
–Submitted by Thomas E. Baynham III 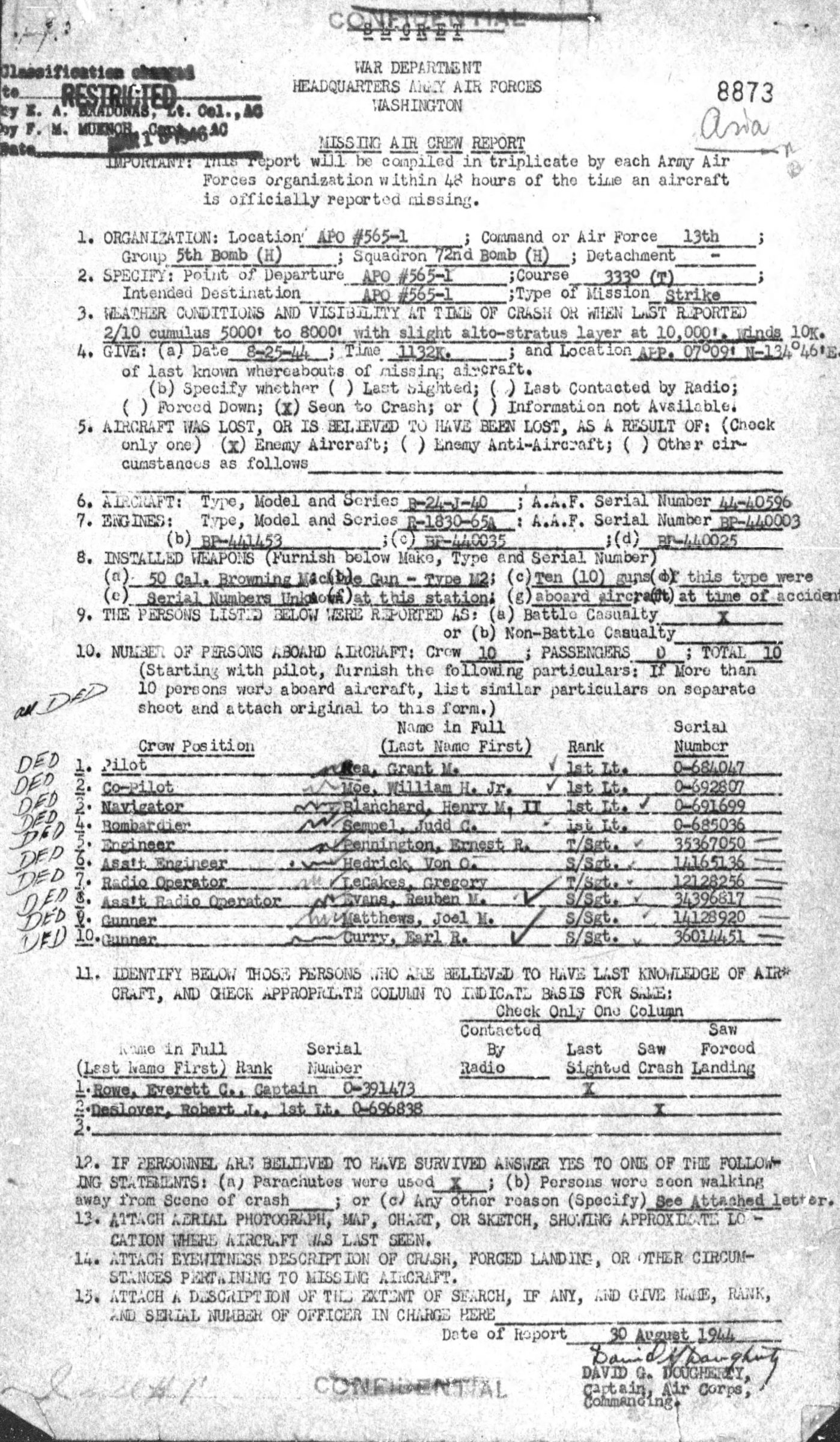 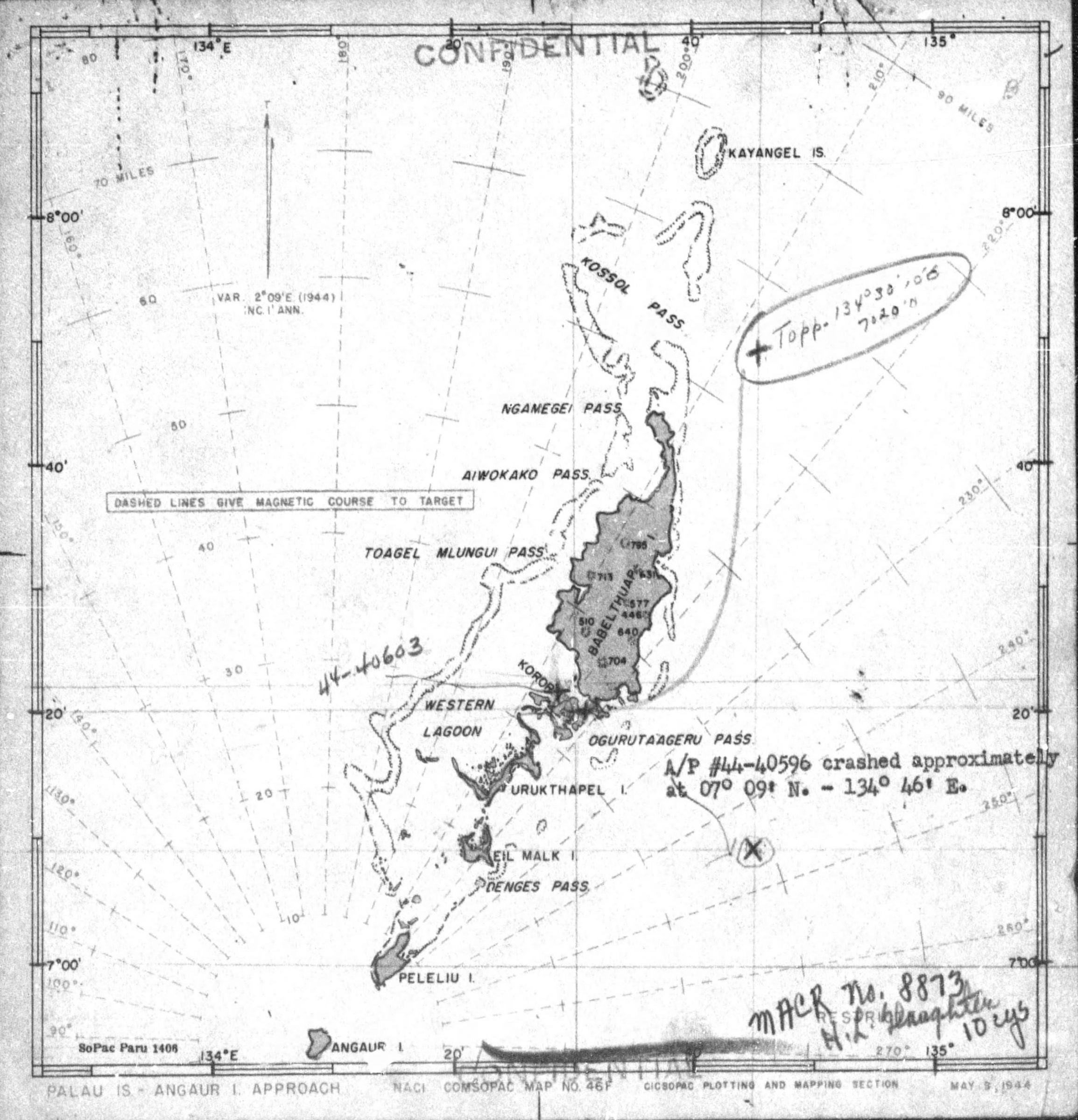 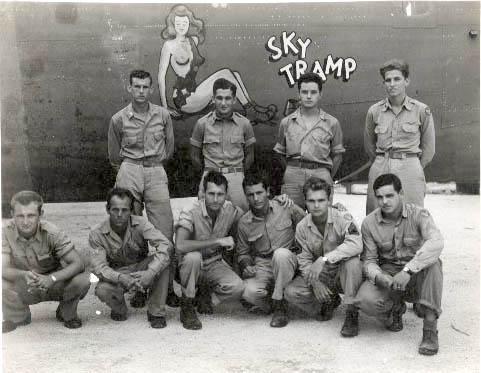