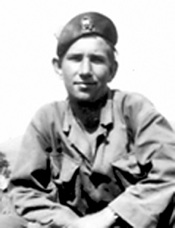 Henry Franklin West
Killed in Action
Private First Class West was a member of Company A, 1st Battalion, 7th Infantry Regiment, 3rd Infantry Division. He was seriously wounded during the defense of Hungnam, North Korea, on November 28, 1950, evacuated to Japan and returned to duty in February 1951. He was Killed in Action while fighting the enemy in the Iron Triangle, near Chorwon, North Korea on July 3, 1951.

The Bronze Star with V device was given to Roger F. West of Kingsport, for his son, Pfc. Henry F. West, who was cited for heroic achievement in action on June 8, 1951, near Sam Ywie, Korea. The presentation was given on January 30, 1952, at the family residence by Colonel Jonathan H. Michael, ROTC professor of military science and tactics at the University of Tennessee.