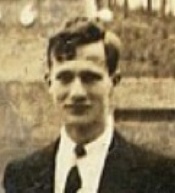 2nd Lt. Harry Ricker Lafon, Jr. Perry, Kentucky and was the son of Harry R. Lafon, Sr. & Katherine Mallon-Lafon. He later lived in Harriman, Tennessee and Harrodsburg, Kentucky. Harry met Helen Frankie McCamish while they both were students at Lincoln Memorial University in Harrogate, Tennessee. They married on July 5, 1941, in Claiborne County, Tennessee.

It is not known when, but Harry enlisted in the Kentucky National Guard at Harrodsburg. On November 25, 1940, Harry was called to federal duty when his tank company was federalized. Harry went to Fort Knox, Kentucky as a private. In early 1941, he was assigned to Headquarters Company when the company was formed with men from the four letter companies of the battalion. During this time he rose in rank from private to sergeant.

After training for nearly a year, Harry was sent to Louisiana for maneuvers in late 1941. It was after the maneuvers at Camp Polk, that Harry and the rest of the battalion learned that they were being sent overseas. At that time, those men who were 29 years old or older were given the chance to resign from federal service. It was also at this time that Harry resigned from the army and was commissioned a second lieutenant.

Harry was reassigned to D Company and was sent to California along the southern route through New Mexico and Arizona. From Angel Island in San Francisco Bay, Harry left the United States.

Harry arrived in the Philippines on Thanksgiving Day, 1941. He and the rest of the battalion were rushed to Ft. Stotsenburg and assigned to tents along the main road between the fort and Clark Airfield. It was at this time that D Company was attached to the 194th Tank Battalion.

On December 8, 1941, Harry lived through the Japanese attack on Clark Field. He and the rest of D Company spent the next four months fighting a delaying action to buy time for the United States to gear up for the war.

It is known that Harry was thought of as being a man of courage. He was also well liked by the enlisted men of D Company. Other members of the company have stated that when he lead his tanks into action, he stood up in the tank’s turret and did not close the hatch for protection.

On April 9, 1942, Harry became a Prisoner of War. He took part in the death march and was held at Camp ODonnell. He was then sent to Cabanatuan when the new camp opened. In October 1942, Harry was selected for transport to the Davao Penal Colony on the Island of Mindanao to work on a labor detail. The POWs on the detail worked on a farm and later built runways at Lasang, Mindanao.

Harry was sent to Davao on February 29, 1944, to work on a runway building detail. Almost 650 POWs built an airfield at Lasang, while 100 POWs built an airfield south of Davao. On June 6, 1944, it became apparent to the Japanese that it was just a matter of time before the Americans landed in the Philippines. To prevent the liberation of the POWs, the Japanese ordered the Tateishi Maru to Lasang. It was given orders to pick up evacuees from Davao for transport to Manila.

On August 19, 1944, the POWs were marched shoeless to the Tabunco pier. The next day they were packed into the holds of the ship. On August 24th, the ship arrived in Zamboanga where it waited for ten days. The conditions in the ships holds were terrible. The holds were hot and steamy. In addition, the longer the POWs were in the holds the stench became worse. The only thing that the Japanese did to ease the conditions for the POWs was to let them on deck and spray them with salt water.

On the tenth day, September 4th, the POWs were transferred onto the Shinyo Maru. The ship sailed on September 7th at 200 a.m. Before the ship sailed, the hatch covers were secured so that the POWs could not lift them from below. The ship was now part of a convoy designated as C-076. Since the POWs had not heard any air raid alerts, they assumed that they were safe.
It should be noted that on August 18th the United States had intercepted the order by Japanese command sending the Shinyo Maru to Zamboanga. Someone interpreted the message as saying the ship was to pick up military personnel instead of military prisoners. Because of this mistake, the U. S. sent the U.S.S. Paddle to intercept the ship. The error was discovered in December 1944.

At 737 p.m. the U.S.S Paddle spotted the convoy off the west coast of Mindanao at Sindangan Point. It fired two torpedoes at the ship. There was a terrific explosion followed immediately by a second explosion. Many of the POWs in the holds were bleeding and dying.

Some of the POWs were successful at escaping the holds and jumped overboard and swam toward shore. As they swam, the surviving Japanese fired at them. Other POWs were shot as they attempted to escape the holds.
According to the POWs in the water, there was a tremendous crushing sound. The ship seemed to bend up in the middle and then sank into the water. Of the 750 POWs who were boarded onto the ship, 83 were rescued by Filipino guerillas and returned to American Forces in October 1944.

It is not known if 2nd Lt. Harry Lafon was one of the POWs who was shot by the Japanese while trying to escape one of the ships holds, or if he died when the ship sank. What is known is that 2nd Lt. Harry R. LaFon, Jr. died on September 7, 1944, in the sinking of the Shinyo Maru.

Since 2nd Lt. Harry Lafon was lost at sea, his name appears on the Tablets of the Missing at the American Military Cemetery at Manila.