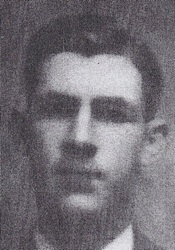 Clinton Courier News, July 5, 1945
After many months of anxious waiting and hoping, Mrs. Harry Winfrey of Lake City has received the news that her brother, Pfc. Henry Glenn Sharp, 30, died in the Pacific, Oct. 24, 1944 while a prisoner of the Japs. The War Department informed Mrs. Winfrey her brother was one of 1775 American prisoners aboard a Jap ship being transferred from the Philippines to Japan when the ship was torpedoed in the China Sea by an American submarine. Of the 1775 only nine Americans escaped alive. Of these four were recaptured by the Japs, while five escaped to friendly territory in a lifeboat. One of the men who escaped, now in the United States, said he survived because he worked in the kitchen and thus received more food and water than did the others. He said the boys prayed that an American sub would sink the ship, for they did not want to go to Japan. When the first torpedo hit, he related, the Amrican prisoners shouted for joy. Pvt. Sharp was captured at the surrender of Corregidor in May, 1942. He remained in the Philippines, the War Department said, until Oc. 11, 1944 when teh doomed ship sailed. At the time of the sinking the ship was 200 miles from the China coast, the nearest land. Since only nine men have been reported as survivors, the War Department said it must be presumed the others perished and War Department records sho Pvt. Sharp died in action, the message to the family related. Pvt. Sharp, a graduate of Lake City High School, entered service in February, 1941 and volunteered for overseas service. After four weeks was sent to the Philippines on Corregidor, where he was attached to Battery D of the 60th Coast Artillery at Fort Mills, he fired an anti-aircraft gun. Before entering service he worked with his father, the late Charles A. Sharp of Lake City, at Beech Grove in the coal mines. He liked basketball and was a star player with the Lake City team. When Corregidor fell, he was listed as missing for almost a year until news came that he was a prisoner of the Japs. The family received five cards from him, one within the last few months, although it was about a year old. One card said he had received a package the family had sent him. In addition to his sister, Mrs. Winfrey, he is also survived by a brother, Clifford R. Sharp of Nashville and another sister, Miss Leola Sharp, now in Florida. 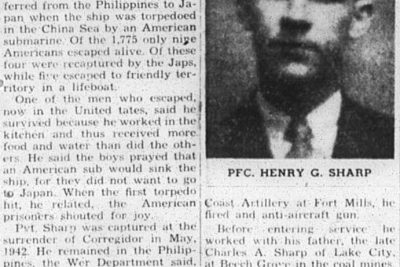