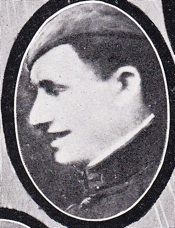 Corporal Harry Clay Tucker entered the service in May 1918, and went overseas two months later as member of 5th Company Auto Replacement Division. On account of knowledge of telegraphy, he was soon transferred to 405th Telegraph Battalion, Signal Corps. Lost his life in the St-Mihiel battle on September 16, 1918. He was killed within a half mile of his brother, who was in the same organization, but did not know of his death.

Corporal Harry Clay Tucker, aged 25 years, son of J.D. Tucker, deputy tax assessor of Knox County, has been killed on the battlefield in France. Official notice of the death of Corporal Tucker has been received from the war department at Washington.
A brief official telegram received by Mr. Tucker contained the following: “Deeply regret to inform you that Corporal Harry Clay Tucker is officially reported killed in action September 6.”
Corporal Tucker was a member of the telegraph battalion. He was taken by the selective draft at Akron, O., last May and was sent to Camp Gordon in the Fifth Auto company, replacement brigade. When accepted for the national army he was employed as a machinist at the plant of the Goodrich Rubber company at Akron.
At the time he was killed he was a member of Company B, 116th Field Signal Battalion. According to letters received from his father young Tucker reached England about August 9, last. He wrote an interesting letter from Romsey, England, also another from France. There were the only letters received from him after he arrived overseas.
He wrote while en route from Camp Gordon the following message on a post card:
“Dear Dad- This trip so far has been a pleasure of our lives, but when we hit the ocean, on to victory for the good ole U.S.A., our dear ones will be dreary until we reach the other side. Your son, on to victory.”
In his letter from England, Corporal Tucker told his father to write often and not to worry over his welfare. He expressed best wishes for his relatives and friends in the United States.
The victim was born in Greene County, Tennessee, near Greeneville, and came to Knoxville with the family when he was a small boy. His mother died when he was a child. The young man received his early training in the city schools and attended school in Fountain City, receiving a liberal education.
He was in the employ of the Western Union Telegraph company and learned telegraphy and became an efficient operator. However, he preferred to do other work and declined to accept regular work as an operator. He spent much time with an uncle, W.T. Huntsman, depot agent and telegraph operator at New Line, a station on the Southern Railway, near Morristown. At that place he studied telegraphy and became proficient as an operator.
For the past two years the young man had been employed in good positions at Cincinnati and Akron, O. When he was taken by the selective draft and sent to France he was assigned to the field signal battalion. The young man was interested in Y.M.C.A. work and was a steady and trustworthy fellow.
J.D. Tucker, father of the dead soldier, has three other sons and a stepson enlisted to help win the victories in the fight for world democracy. The other sons are Joseph H. Tucker with the American Expeditionary Forces in France Joel O. Tucker, now training at Camp Jackson Troie E. Tucker, with the mechanical training corps at Chilhowee park. The stepson is Walter Mason, supply sergeant Company A, University of Tennessee.
-The Journal and Tribune, Knoxville, Tennessee, October 3, 1918

J.D. Tucker, deputy county tax assessor, is in receipt of a letter of condolence from Capt. J.T. Quinn, S.C. company E, 405th Telegraph Battalion, American Expeditionary Forces in which Capt. Quinn tells of the manner in which Mr. Tucker’s son, Corp. H. Clay Tucker, Knoxville boy, met his death in service. His letter follows:
October 1, 1918
Dear Friend
It is with the deepest regret that I write to you of the death of your son of which you are no doubt cognizant. Corporal Harry Clay Tucker joined my company about a week before his death. I found him to be a fine boy, good soldier and a willing worker. Even in the short time he was with us, he endeared himself to his comrades and our hearts were all wrung at his death. I heartily sympathize with you in your grief, but wish you to know that your son met his death performing his duty and upholding the standards of the Signal Corps. My heartfelt sympathy is with you in your hour of grief. If I can ever be of service to your, call on me for anything I can do. Sincerely yours, John T. Quinn
-The Journal and Tribune, Knoxville, Tennessee, November 2, 1918 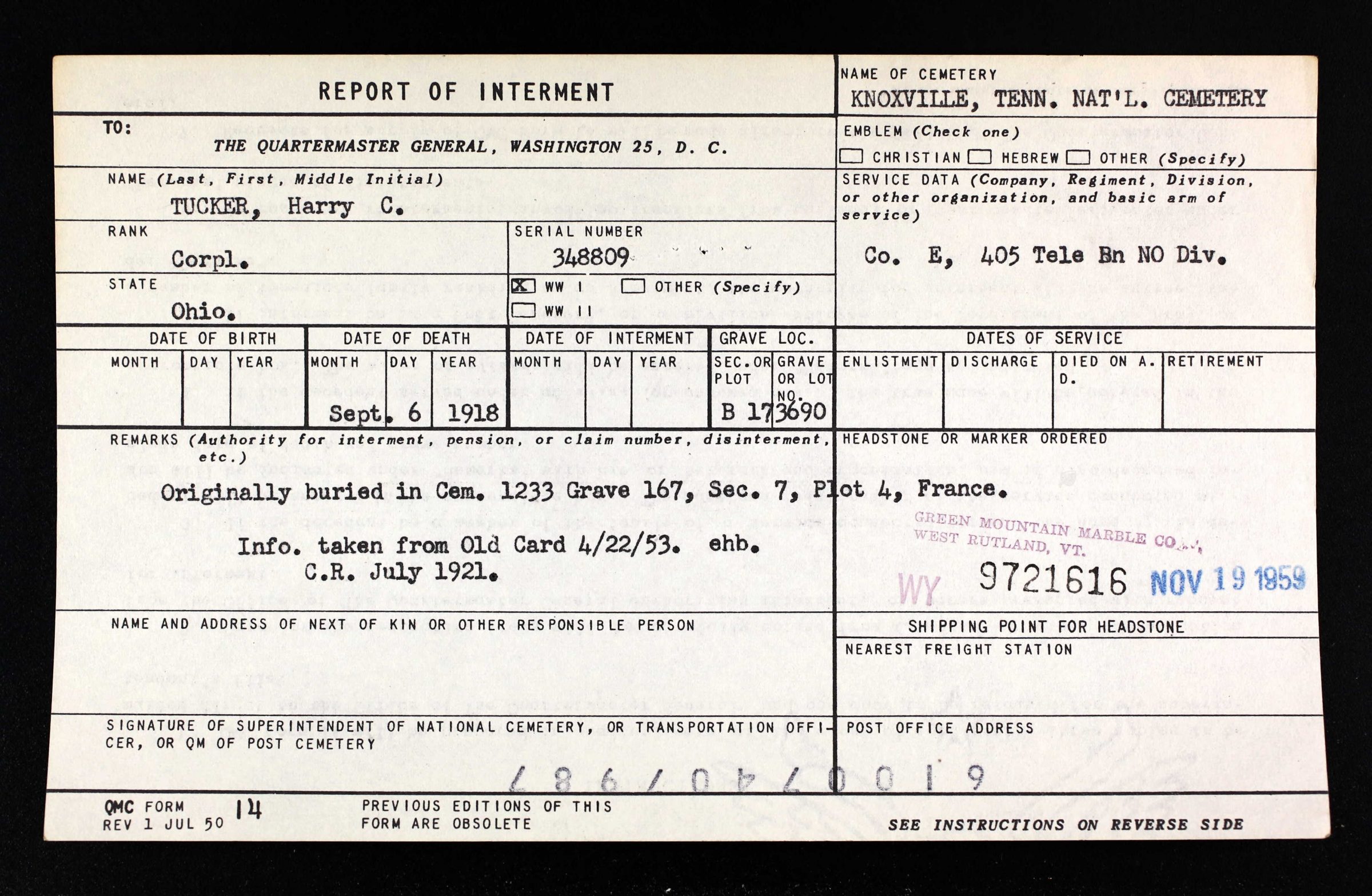 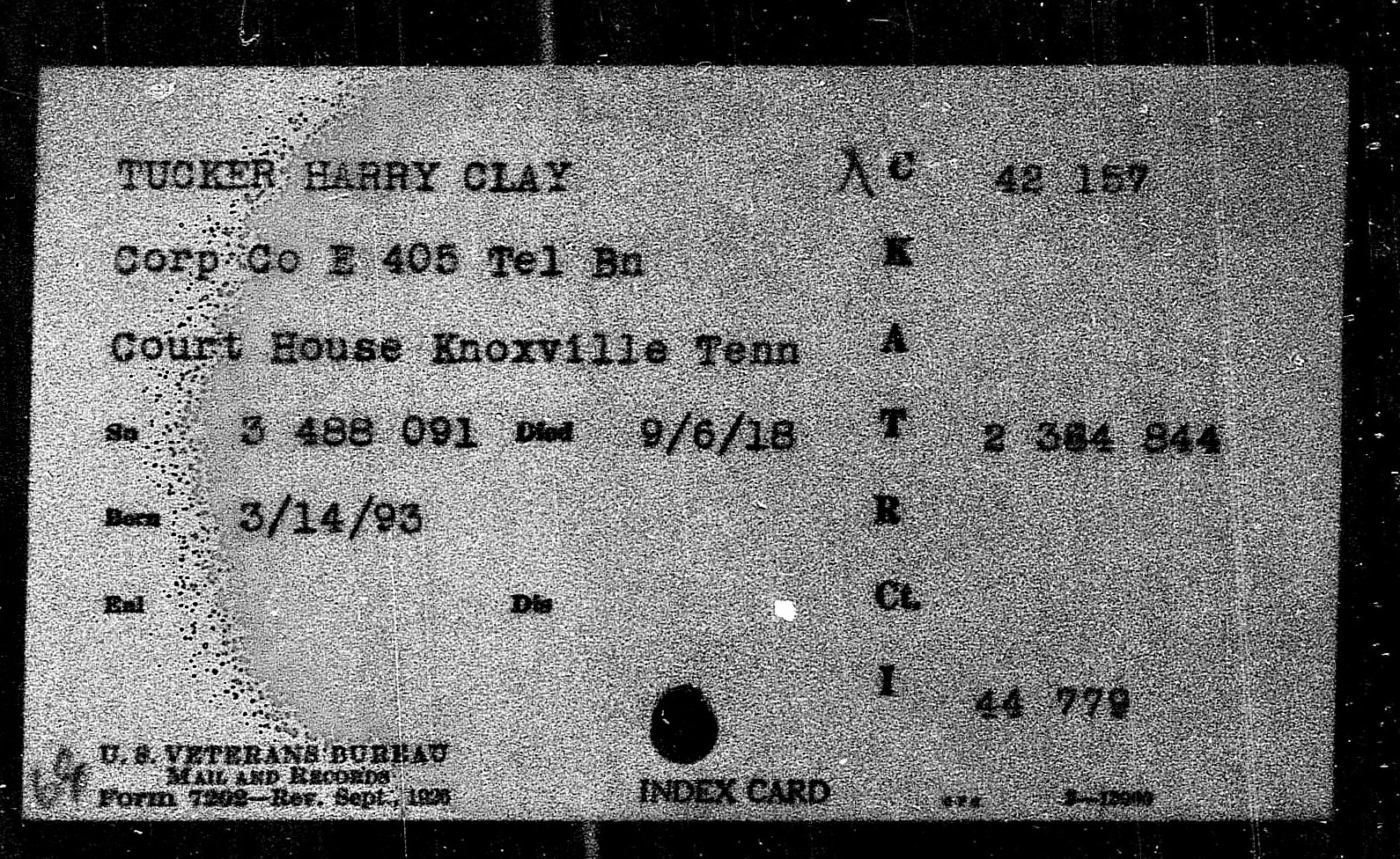