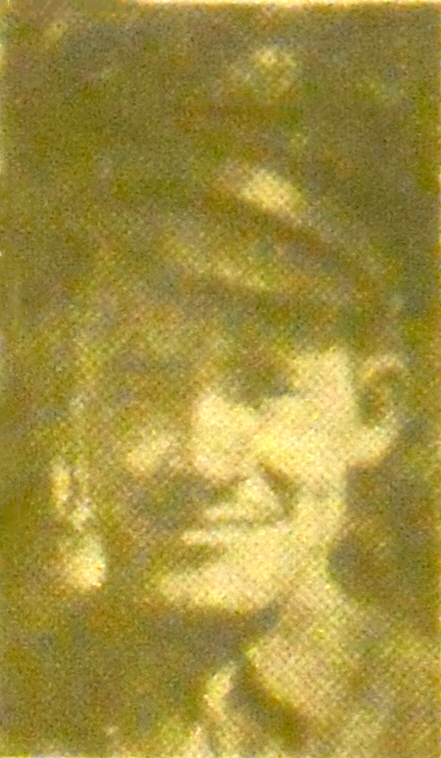 Harry was born on 28 April 1916 in Telford, Washington County, Tennessee. He attended the Claxton School at Washington College and worked as a farmer and at the Eureka Roller Mill in Telford prior to enlisting the United States Army. Harry enlisted on 20 January 1941 at Fort Oglethorpe, Georgia.

Harry was assigned to Company I, 3rd Battalion, 22nd Motorized Regiment, 4th Motorized Division, the “Ivy” Division at Fort Benning, Georgia. The division participated in the Louisiana Maneuvers during August 1941 and then in the Carolina Maneuvers in October 1941, afterwards returning back to Fort Benning. The division transferred to Camp Gordon, Georgia, in December 1941, the month America entered World War II. They and Harry again participated in the Carolina Maneuvers during the summer of 42. The division relocated to Fort Dix, New Jersey on 12 April 1943 where it was reconfigured and redesignated as the 4th Infantry Division and the regiments as Infantry Regiments. Harry remained with Company I, 3rd Battalion, but now with the 22nd Infantry Regiment.

The division participated in battlefield maneuvers at Camp Johnson in Florida starting in September 1943 and afterwards were reassigned to Fort Jackson, South Carolina on 1 December 1943. While at Fort Jackson, the division was alerted for overseas movement and staged at Camp Kilmer, New Jersey, beginning 4 January 1944. Harry and the 4th departed New York’s Port of Embarkation by ship for England on 18 January. They arrived England on 28 January and started a new phase of training, that of invading Fortress Europe.

Harry crossed the English Channel and hit the beaches of Normandy, France on D-Day, 6 June 1944. The 4th Infantry Division was assigned Utah Beach as their landing/invasion site. They received some resistance from the German Army, but completed their landing and their mission of relieving the isolated 82nd Airborne Division at Sainte-Mère-Église who parachuted in earlier under the cover of darkness. The 4th then started clearing the Cotentin Peninsula to the west. On 23 June 1944, Harry and his platoon were securing an abandoned village north of Hau Cauchon when he was hit and killed in action. He was 28 years old. Harry was awarded the Bronze Star and Purple Heart Medals.

He was first interred at a temporary cemetery in France and then later relocated to the Normandy American Cemetery in Colleville-sur-Mur that overlooks Omaha Beach. At the request of Harry’s family, he was returned home and a funeral service conducted on Sunday, 19 December 1948 at the Limestone, now Grace Brethren Church.  Reverends J.R. Jackson and Guy Presley officiated.  He was reinterred at the Limestone, now Grace Brethren Cemetery in Row 12, Grave 7 at Limestone, Washington County, Tennessee. His brother: Jerome ordered Harry’s military grave marker on 7 March 1949. 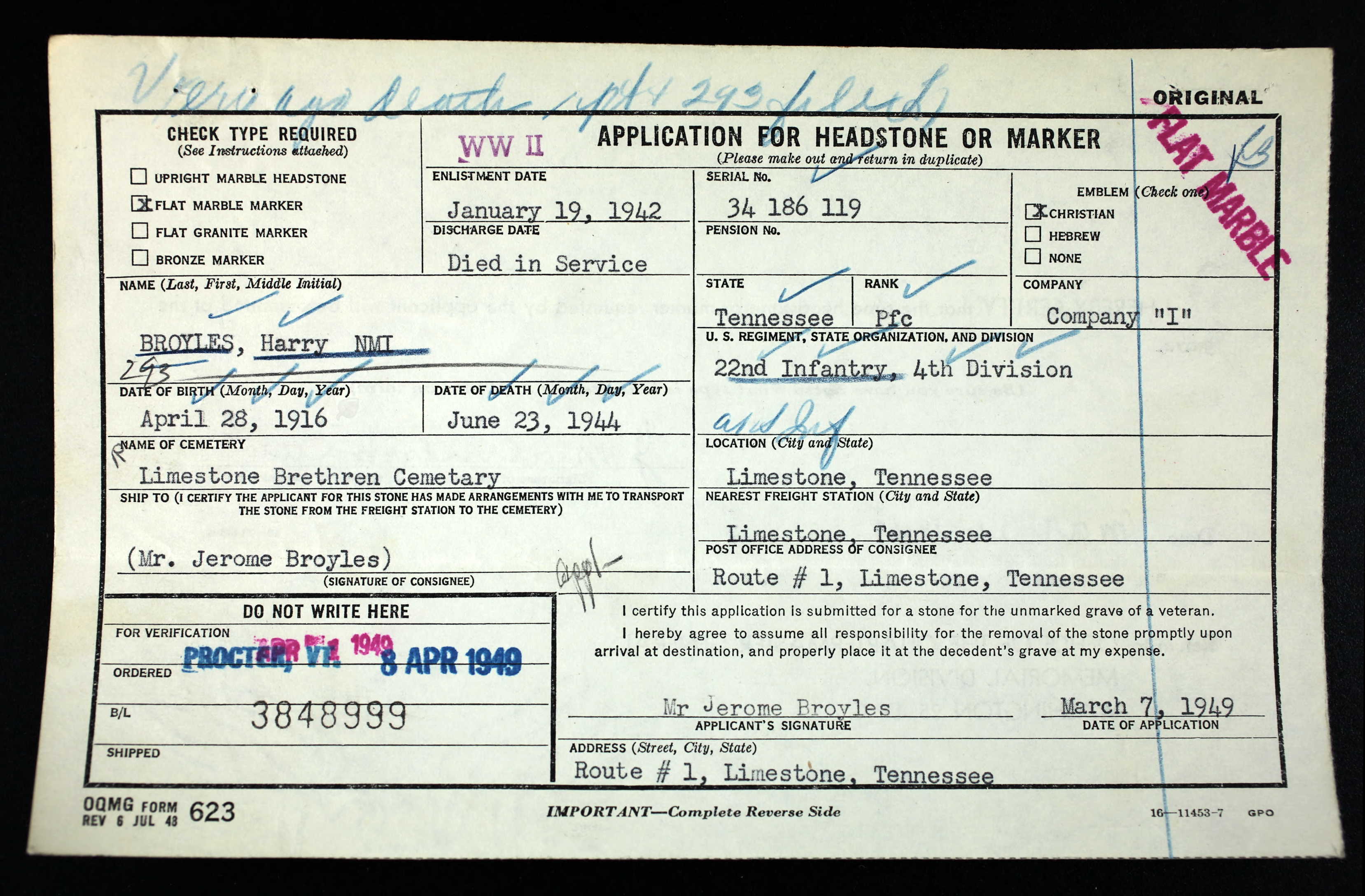 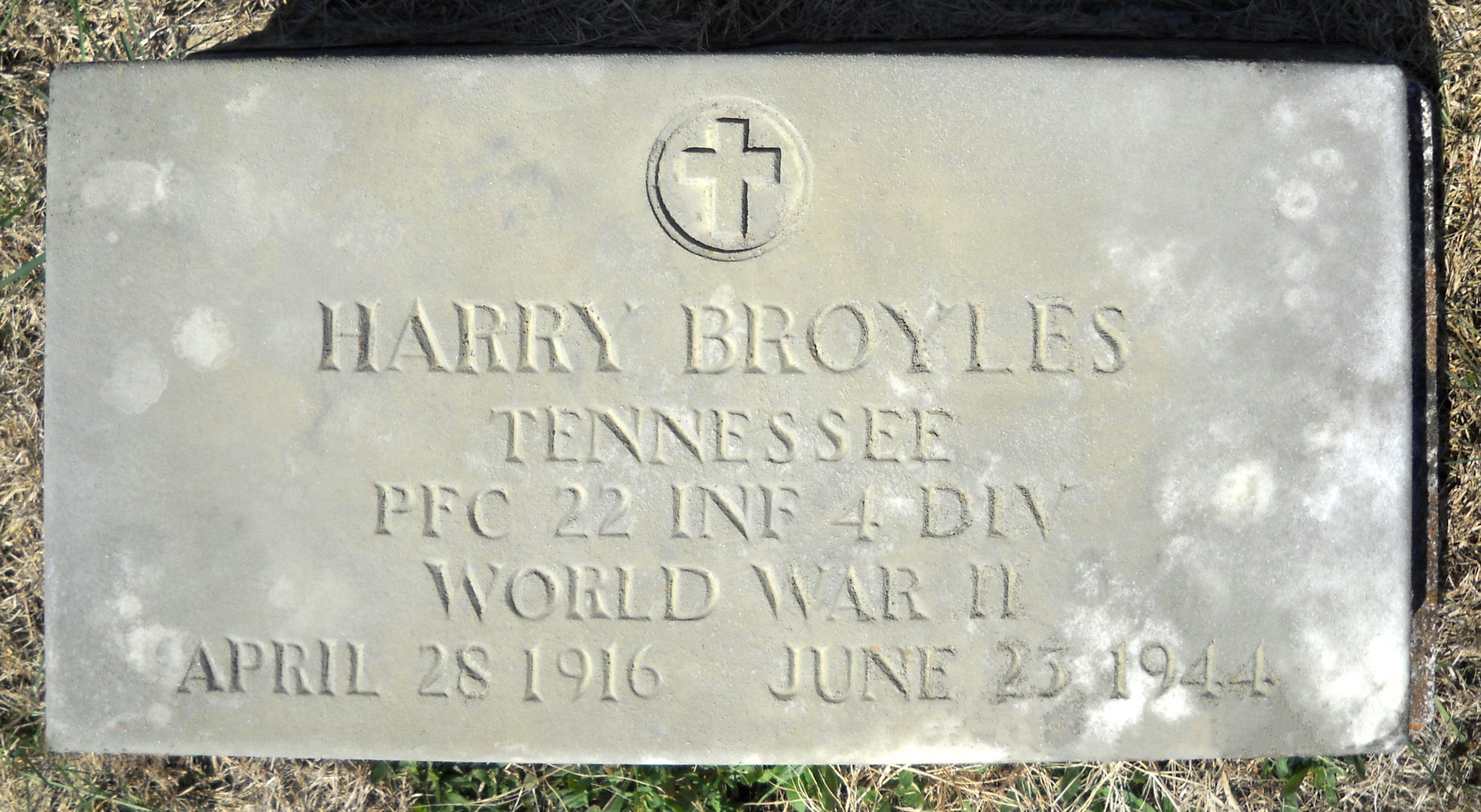