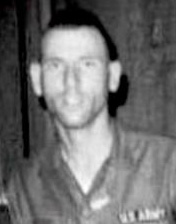 Specialist 4 Harry Bernard Frank, Jr. was born on August 27, 1945, and was originally from Alpharetta, Georgia, north of Atlanta. He served his country in the Vietnam War in the United States Army, as part of B Company, 1st Battalion, 35th Infantry, 25th Infantry Division. His tour began on May 10, 1967; less than two months later, on June 28, 1967, he was killed from wounds received from an explosive device in Quang Ngai, South Vietnam. Sp4 Frank was 21 at the time of his death. He is buried at Chattanooga National Cemetery in Chattanooga, Tennessee, and is memorialized on the Vietnam Veterans Memorial on Panel 22E, Line 77.

The following are tributes to Sp4 Frank:

Jerry Ferguson, best friend:  Remembering With Pride
I have only respect. I have missed, my best friend, for the last forty years. See ya soon.
Jul 19, 2008