Harold was born in Campbell County, TN. Was the son of the Rev. W.O. Bill Douglas. He served in the Army during WW II and received several medals. Harold was killed near the end of the war in 1945. He was shot by a sniper. Harold was 19 years old.
-From information on the Campbell County Military website provided by Ruth Martin.

Distinguished Service Cross Citation:
“The President of the United States of America, authorized by Act of Congress, July 9, 1918, takes pride in presenting the Distinguished Service Cross (Posthumously) to Staff Sergeant Harold D. Douglas, United States Army, for extraordinary heroism in connection with military operations against an armed enemy while serving with Company L, 104th Infantry Regiment, 26th Infantry Division, in action against enemy forces in Germany, on 3 April 1945. During an attack against Kerzell, Germany, when Sergeant Douglas’ company was halted by a blown bridge, he volunteered to reconnoiter a crossing site. After crossing the stream he came under direct fire from an enemy machinegun and advanced alone to silence it. Maneuvering carefully he made his way to within fifty yards of the emplacement then boldly dashed the remaining distance across exposed terrain and killed the gun crew with a hand grenade. Sergeant Douglas returned to his unit and guided it across the stream, but he was killed by sniper fire as he entered the town. Staff Sergeant Douglas’ intrepid actions, personal bravery and zealous devotion to duty at the cost of his life, exemplify the highest traditions of the military forces of the United States and reflect great credit upon himself, the 26th Infantry Division, and the United States Army.” 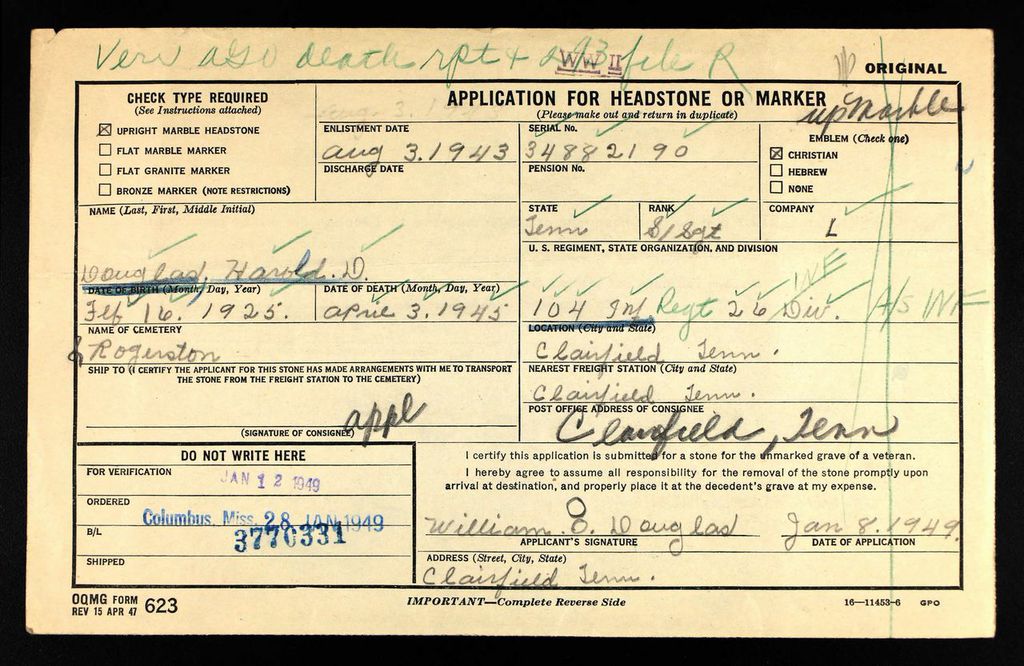