Sergeant Hammond was killed in action near Estrées, France, October 6, 1918. He was the first Sullivan County boy to be killed in the war. Notification that the body would arrive within about a week was received from Washington by the parents of young Hammond Mr. and Mrs. J.W. Hammond. He died fighting bravely on the front at Naroy, France, and since that time his body has laid in a little French village about one mile distant from Naroy. He was a member of the Thirtieth Division, and was in the service of the Signal Corps. A signal honor was paid to his memory by the ex-soldiers of Kingsport when the local post of the American Legion was named Hammond Post, and the city also did honor to his memory and the service which he rendere his country by naming one of its streets for him, Hammond Avenue.
The body will be buried in the cemetery near Lovedal. 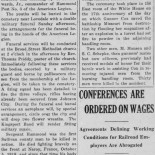 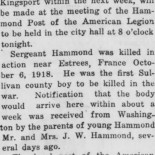 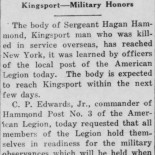 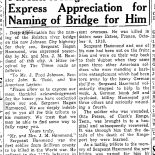 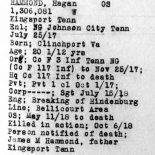 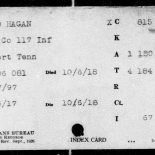