A citation received this week from the war department notifies Mr. and Mrs. Herschel Pryor, 610 Cedar Street, that their son the late Kenneth L. Pryor had received a Bronze Star Medal for meritorious service in Germany before his death in a jeep accident in Germany, April 18, 1945.

Young Pryor, a technician fifth grade in the infantry, was a student at the University of Chattanooga before entering the service March 30, 1944, and had been employed at the United States Post office here. He was graduated from Chattanooga High School in 1943. He was editor of the Dynamo school annual.

His citation reads as follows
“T5 Kenneth H. Pryor, infantry Headquarters Company, Second Battalion, 311th Regiment, for meritorious service in connection with military operations against the enemy during the period Dec. 9, 1944, to April 16, 1945, in Germany. T5 Pryor distinguished himself during this period by consistent outstanding performance of duty as a radio operator. On many occasions he remained at his post without relief for hours, maintaining contact with battalion units. On March 1, 1945, he operated his radio from a forward post under enemy fire for a long period while his battalion was securing its area east of the Roer River. His courage, military skill and devotion to duty are in accordance with the highest military traditions. Entered the military service from Tennessee.”
-The Chattanooga Times November 23, 1945 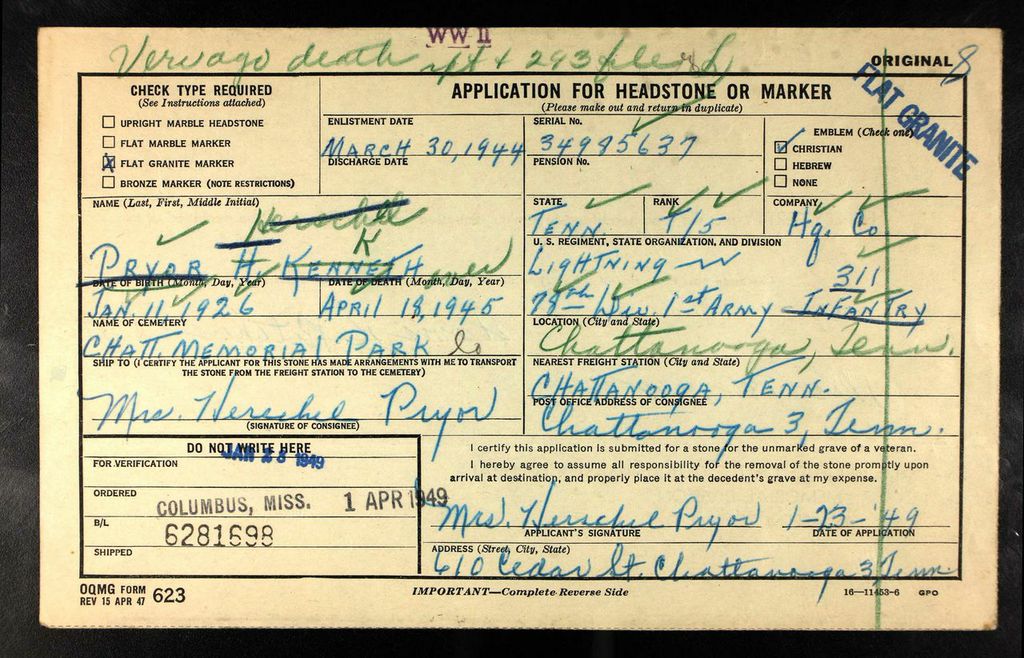