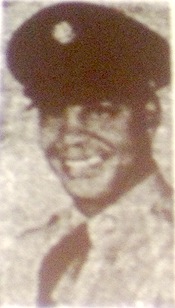 Private First Class Hugh Allen Love was born on August 19, 1939, and was originally from Knoxville, Tennessee. He served his country in the Vietnam War in the United States Army, as an indirect fire infantryman in D Company, 2nd Battalion, 5th Cavalry, 1st Cavalry Division. He was a 2-year veteran of the Army when his tour began on November 5, 1965. On February 17, 1966, PFC Love was killed under hostile conditions in Binh Dinh province, South Vietnam; he was 26 years old at the time of his death. He was the recipient of the Purple Heart Medal. PFC Love is buried at Knoxville National Cemetery, Knoxville, Tennessee, and is memorialized on the Vietnam Veterans Memorial on Panel 05E, Line 42.

Loudon GI Love Funeral Set Tuesday
LOUDON Feb 27- Funeral services for Pfc. Hugh Allen Love, 26, the first Loudon County native to die in the Vietnam War, will be held at 130 pm Tuesday at Mount Olive Baptist Church here. Pfc. Love who had been in Vietnam since last December was killed about two weeks ago in combat with the First Calvary Airmobile Division. He had been in the Army for the pst four years. He was a graduate of Cook High School, and attended Dunbar school. His wife was the former Mattie Allen of Knoxville. The family had been making its home in Los Angeles, Calif. for several years. Surviving in addition to the widow and a daughter are his mother, Mrs. Christine Simmons, Loudon step-father, Ervin Simmons, Loudon and three brothers, Jan Allen Smith, Knoxville, William E. Smith, Buffalo, NY, and a half brother, Ray Simmons of Loudon. Rev. Thomas Ratledge will officiate at the service and burial will be in the National Cemetery, Knoxville. Quinn-Karnes mortuary is in charge. -The Knoxville Journal, February 28, 1966