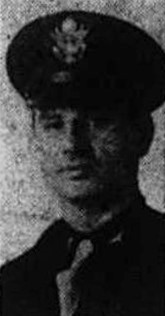 First Lieutenant Guy B. Tallent is killed in an airplane accident

Word was received here on Tuesday by Mr. and Mrs. Sam M. Tallent that their son, First Lt. Guy B. Tallent, of the Army Air Corps, had been killed in an airplane accident at Malden Army Air Field, Malden, Mo. where he was in service as an instructor.

Guy was 28 years of age. He was a graduate of Madisonville High School, Hiwassee College and the University of Tennessee. He had received training at Maxwell Field, AL, and received his wings at Napier Field in April, 1943.

From reports, Lt. Tallent was up in a plane teaching an aviation cadet named McMasters, from Memphis, the principles of Army flying when the accident occurred. Cadet McMasters was also killed. The direct cause of the accident is not known.

The bereaved ones have the sincere sympathy of many friends.
Sunset Cem., Monroe Co., Tn

The Knoxville Journal, May 30, 1943
Lt. Guy B. Tallent, Madisonville, is now stationed at Bainbridge Army Air Field, where he has been assigned as a flight instructor. Lt. Tallent is a former student of Hiwassee College and the University of Tennessee, where he played quaterback on the football team. He is a son of Mr. and Mrs. S.M. Tallent and a brother of Mrs. G.M. Swanson, Fountain City. 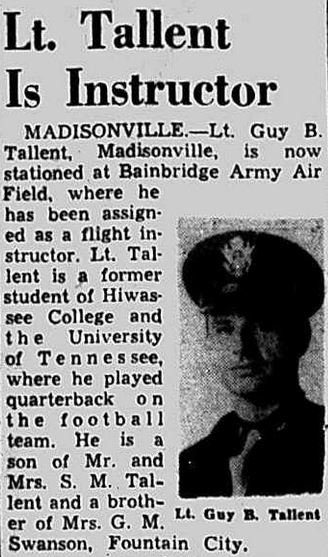 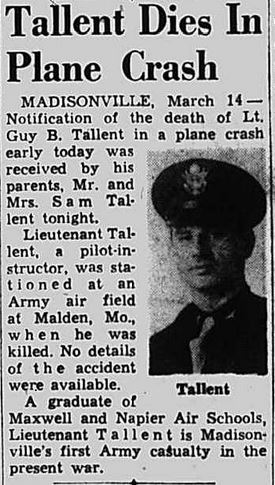